We have two great birthdays in the world of punk to mark.  The two celebrants straddle the East and West Village, and both sides of the Atlantic. 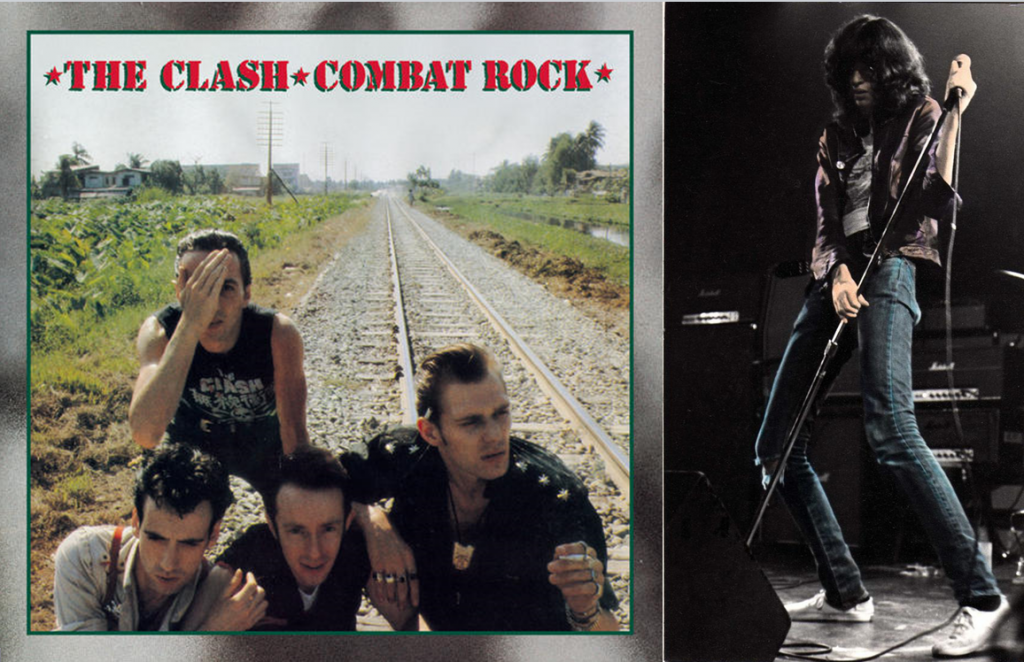 Today, May 14, is the day in 1982 when the Clash’s Combat Rock was released. The band’s fifth and most popular album, it was also the last one on which Mick Jones played before splitting off from the band, and the Clash finally dissolved.

New York’s influence can be felt all over the album, which marked the punk band’s deepest exploration of dance music and beats, along with beat poetry and film.  The album was recorded at Electric Lady Studios in the West Village, and featured East Village staple Allen Ginsberg reciting the lyrics to the song ‘Ghetto Defendant’ (Ginsberg actually joined The Clash onstage to perform with them during their New York shows in support of the album).  The track ‘Red Angel Dragnet’ quoted extensively from the movie ‘Taxi Driver‘ (shot largely in the East Village) and chronicled the death of a member of the Guardian Angels, who were a fixture in the Village and locations like Times Square in the early 1980’s.

Meanwhile May 19 marks the birthday in 1951 of Jeffrey Ross Hyman, better known as Joey Ramone, lead singer of the Ramones.  The Ramones are of course considered the godfathers of punk, and while Joey and the rest of his bandmates hailed originally from Forest Hills, Queens, it was downtown where they really made their mark upon the world.

While their first public performance was just north of the Village, the Ramones made a name for themselves with the East Village venue with which they were most closely associated, CBGB’s.  In fact, after Joey died in 2001, the corner of 2nd Street and Bowery was named “Joey Ramone Place” in honor of his contributions, his connection to nearby CBGB’s, and the fact that, starting out, he and his fellow bandmates lived on that block.

As the Ramones gained some greater degree of success, Joey moved a little further west, spending much of the latter part of his life living in the comfortable white brick apartment building at 115 East 9th Street, located between 3rd and 4th Avenues.

Sadly, neither Joey Ramone nor Joe Strummer, The Clash nor the Ramones survive to mark these anniversaries.  But their memory lives on in these downtown locations in which they made their mark, and which had such a profound influence upon them.

One response to “Happy Birthday Combat Rock and Joey Ramone”