In 1973, what was once one of the largest and most elegant hotels in the country collapsed onto Broadway, killing four and injuring many. 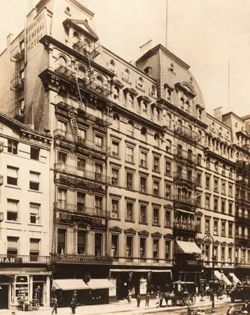 The eight-story, 400-room Grand Central Hotel opened in 1870 and was built in the Second Empire style by architect Henry Engelbert for carpet manufacturer Elias S. Higgins. Located at 667-77 Broadway (near Bond Street, south of West 3rd Street), it was one of the largest hotels in the United States when it was built and was lavishly furnished. In the late 19th century, the hotel with its restaurants and grand spaces became a hub of New York society.

As the 20th century progressed, the hotel’s name was changed to the Broadway Central, and its luster faded. By the 1960s and after changes in ownership, the building came to be used as a welfare hotel. Complaints from residents and neighbors about crime, drug use, and prostitution in the building, as well as deteriorating and unhygienic conditions, spurred the State to investigate and penalize the owners. 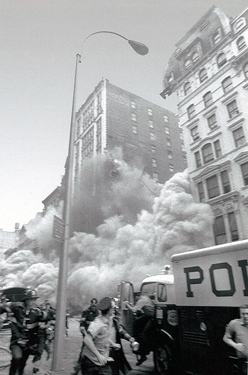 Re-branded as The University Hotel by the early 1970s, the hotel attempted to salvage its image. But by the summer of 1973 bigger problems than image would reveal themselves. Residents reported to the City that cracks had formed throughout the hotel and several structural walls had begun bowing outward. Years of neglect and un-reported interior renovation work had taken its toll on the hundred year old structure. Early on August 3rd, hotel patrons began hearing what they described as “’bongs,’ ‘tings,’ and ‘groans,’ and other noises,” and seeing falling plasterwork throughout the building. By the late afternoon most of the over 300 hotel guests had evacuated, when at about 5:10 P.M. a huge section of the building abruptly collapsed, spilling a huge pile of rubble down on to Broadway. As firemen sifted through the rubble – more than twenty feet high in some places — four bodies were found.

The remaining sections of the hotel were demolished and removed. Also lost on the Mercer Street side of the building were six popular off-Broadway theaters that composed the Mercer Arts center.

Housing for NYU Law School students was eventually built on the site and remains today.

7 responses to “When a Hotel Collapsed onto Broadway”