On June 19, 2008, 101 Avenue A, home to the Pyramid Club, was found eligible for listing on the State and National Registers of Historic Places after GVSHP researched and nominated it for consideration. The listing highlighted both the unique architectural character of the building, as well as the variety of significant cultural uses over the years. It was one of the first times a site had ever been found eligible for the State and National Registers of Historic Places based upon LGBT history, and especially upon drag or transgender history.

In 2012, the building was included in the East Village-Lower East Side Historic District, designated by the New York City Landmarks Preservation Commission; the building had originally been left out of the city’s proposed district, but GVSHP and our allies fought very hard to get it included.

In campaigning to get the building landmarked, GVSHP dug into the almost 140-year history of the building. Here is just some of what we found out about it:

“101 Avenue A was built in 1876 by Prussian-born architect William Jose. Like many of Jose’s designs, the façade of 101 Avenue A is especially ornate for the tenement and saloon that occupied the building behind it. Even the building’s fire escape is unusually ornate, featuring elaborate wrought iron railings and floral attachments to the side of the ladder. The ground floor’s four-bay configuration, arches, and cornice are all still remarkably intact for a neighborhood that has undergone so many changes over the last 140 years. 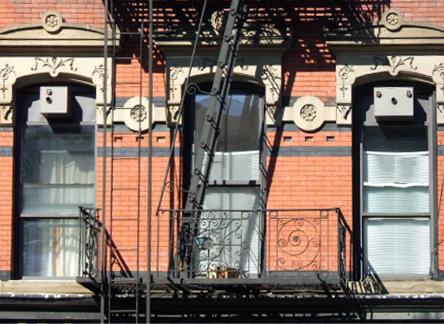 Until at least the mid-1930s, the ground floor of 101 Avenue A was a hall where people would come to eat, celebrate, mourn, or discuss union and labor issues. Not surprisingly given the history of the East Village neighborhood, many of the halls were German-run and served their German neighbors. The earliest hall occupying 101 Avenue A was Kern’s Hall, which was an important gathering spot for the local community. Kern’s held the celebratory supper when the neighborhood’s most prominent park, Tompkins Square Park, was completed in 1879. The hall was also a location for many important labor-related discussions, even as its management and name changed over the years.

Just two years after the formation of the American Federation of Labor in 1886, Brooklyn and New York members of the AFL met at 101 Avenue A to plan for the union’s larger New York State convention. The hall was also a popular gathering spot for the Germans and German-American organizations in the neighborhood. The United German Society hosted meetings at 101 Avenue A, and the Central Spar Verein  occupied an office there. After over a thousand people, most of them of German descent, perished in the General Slocum disaster in 1904, the neighborhood gathered at 101 Avenue A for a service memorializing those who passed away and honoring officers who had helped investigate the disaster. 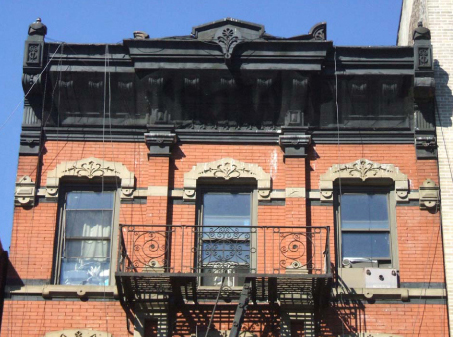 In the 1960s, as the immigrant neighborhood of the East Village was being discovered by new residents, the second floor apartment was occupied by underground music icon and Warhol superstar Nico, and the ground floor space had become a music venue, the East Village In. Although the name and the type of music played within the space has changed many times over the last four decades, the space has continued to be a music club. In 1979, the current tenant, the Pyramid Club, opened in the space.

The Pyramid Club was a defining club of the East Village scene in the 1980s. The club was a hangout for both the fashionable showing off their latest looks, as well as for the counter cultures emerging in the neighborhood, leading the New York Times to write, “There is nothing quite like this club anywhere in New York, and it adheres to no formulas. In fact, it is more like the Paris boites of the 50s or the speak-easies of the 20s than anything else.” Another New York Times article in 1985 wrote, “If your navy blue trademark is your hair, not your suit, you might prefer the live bands and progressive sounds featured at the Pyramid Club.”  The club became a hangout for “a new breed of politicized drag performers” like Lypsinka, Lady Bunny, and RuPaul, whose first New York City show was at the Pyramid Club in 1982. Legend has it that in the early 1980s, after partying at the Pyramid Club, a group of drag queens walked over to Tompkins Square Park and put on an impromptu outdoor festival which became the first Wigstock Drag Festival. Over the next 20 years, Wigstock would become more formalized and would grow to be a major New York City event, attracting world-wide attention and participation. 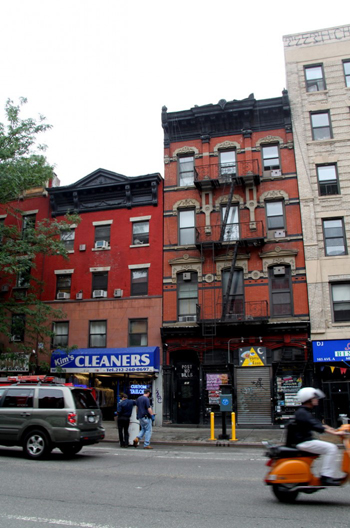 Avant-garde performance artists like Ann Magnuson were regulars at the Pyramid Club, and several well-known artists and musicians performed and partied at the club. Madonna, who frequented the Pyramid Club, attended an early AIDS benefit there in 1986 for her former roommate and close friend, Martin Burgoyne. Andy Warhol, Keith Haring, and Kenny Scharf were also in attendance at Burgoyne’s benefit, supporting their ailing friend at a time when misinformation about the disease pervaded the American public and it “had become a plague in the bohemian neighborhoods of downtown Manhattan.”  In addition to performance art, cabaret, theater, and dancing, the Pyramid Club hosted live bands. Several up and coming artists who would dominate mainstream music in the 1990s played their first New York City shows at the Pyramid Club, including the Red Hot Chili Peppers, who played in 1984, and Nirvana, who played in 1989.

In the 1980s, the Pyramid Club and its peers, including CBGB, the Mudd Club, Area, and Danceteria, were a generation of performance venues that had an unusually broad impact upon the larger cultural landscape. Today, of these influential clubs, the Pyramid is the sole survivor. The club has managed so far to endure the recent rising property values and changing population of the East Village and continues to host dancing and other parties.”