In 2014 Village Preservation presented a program at the Community Room at Westbeth with author Prof. William W. Buzbee and his book, “Fighting Westway: Environmental Law, Citizen Activism, and the Regulatory War that Transformed New York City.” 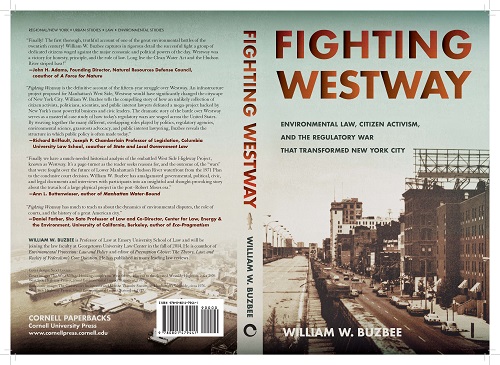 It was fitting that the program took place at Westbeth, located on West Street along the Hudson River. This very location was, at one time in the not-so-distant past, in grave danger of becoming a huge interstate highway. The book chronicles the humble grass-roots movement that defeated a well-funded government project – a project that was supported by the President of the United States, the Governor of New York State, the Mayor of New York City, banks, real estate developers, and labor unions. No small fight indeed!

The west side of Manhattan has changed many times over the years, but now it’s mostly a public park with a few commercial ventures here and there, like the Pier 40 parking garage and sports fields.

But for most of the 20th century, the waterfront was dominated by an elevated highway (officially called the Miller Elevated Highway) that ran from West 72nd Street to Chambers Street. Built between 1927 and 1931, the elevated West Side Highway was poorly designed and began to deteriorate in the 1950’s. Several plans to alter the highway were offered, but on December 16, 1973, a portion of the highway collapsed at Gansevoort Street, right near Westbeth and adjacent to today’s Whitney Museum, under the weight of a cement truck, and the highway was soon shut down.

The remains of the elevated highway were removed gradually from 1977 to 1989, and plans for a new highway, nicknamed “Westway” by Planning Commission chair John Zuccotti emerged. This massive project – budgeted at $2.1 billion in 1981 – called for new landfill to extend 1,000 feet into the river, a sunken two-tiered highway, parks and new real estate for development. New Yorkers, still weary from fighting the Robert Moses highway proposals a generation earlier, overwhelmingly opposed these new plans as well.

Fears of increased traffic, deteriorating air quality, and other environmental concerns were widespread. Greenwich Village resident Marcy Benstock led the fight and founded the Clean Air Campaign, which joined the lawsuit to revoke the 1981 dredging permit issued to the Army Corps of Engineers.  In 1982, based on data from studies done by the Corps, the U.S. District Court stopped work on the project, citing adverse environmental effects, including destruction of the spawning area for striped bass. In 1985, New York City officially abandoned the plans for Westway.

Luckily, the federal government money originally allocated for the Westway project was converted to funding for public transportation and for construction of the more modest present-day West Street / West Side Highway. Next time you’re there, maybe to visit the Village-Award-winning Village Community Boathouse, take a look up and down and think about what might have been.

For more information on the Westway fight, explore the West Village Committee collection of our online Preservation History Archive here.