This post is part of the Looking Up series, which explores the unique architectural and historical stories that can be discovered when we raise our gaze above the sidewalk, the storefront, and the second floor.

The Washington Square Arch is something that many people who live in the neighborhood can easily take for granted. It’s a part of the landscape that’s passed frequently and not given a second thought. But the structure is more than just a large picturesque arch of Tuckahoe marble — let’s look up and unpack some of the meaning behind the details that can be easily overlooked.

The arch that stands at the northern end of the park is actually a permanent version of a temporary wood and plaster arch constructed for the 1889 centennial of Washington’s first inauguration at Federal Hall in Lower Manhattan, which took place on April 30, 1789. The current permanent arch, dedicated in 1895, actually holds two representations of George Washington. The one to the east pier has Washington flanked by representations of Fame and Valor with his hands resting atop a sword (sculpted by Hermon MacNeil) to commemorate his time as general during the War of Independence.  The sculpture on the west pier has him accompanied by Wisdom and Justice (by Alexander Stirling Calder), noting his time as president of the United States. These sculptures, frequently referred to as Washington At War and Washington At Peace, were not placed on the arch until 1916 and 1918. Above Washington At Peace, one finds a representation of an open book, inscribed with the Latin phrase Exitus acta probat, a motto of the Washington family that the museum at Mount Vernon translates as “the result is the test of the actions” (also sometimes translated as “the outcome justifies the deed”).

Looking even farther up on the north side, one finds on the east the Washington coat of arms (which also gave the city of Washington, D.C. its flag), and on the west, the Great Seal of the United States. On the southern side of the arch, the two seals present are those of New York City and New York State. 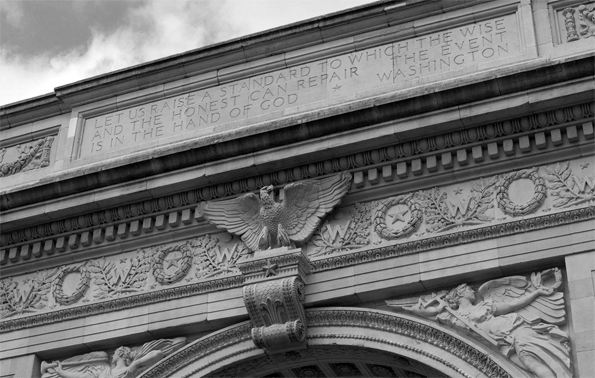