Next in the Map It! series is 7th Street Place, aka Leandert’s Place and St. Bridget’s Street, a long-lost alleyway on the Avenue B side of Tompkin’s Square Park between 7th and 8th Streets that angled toward the center of the block behind Nos. 183 to 197 East 7th. The skewed property line dates to 1645, predating the existing Manhattan street grid, and once provided access to five five-story tenement buildings that were demolished by the Works Progress Administration (WPA) in the mid 20th century. The group of buildings occupied historic lot 62, though were later considered part of lot 5 when the properties were owned by St. Brigid’s Church, located on the southeast corner of Avenue B and East 8th Street. The church was constructed from the late 1840s to 1856 by Irish immigrants and designed by notable Irish-American architect Patrick Keely. 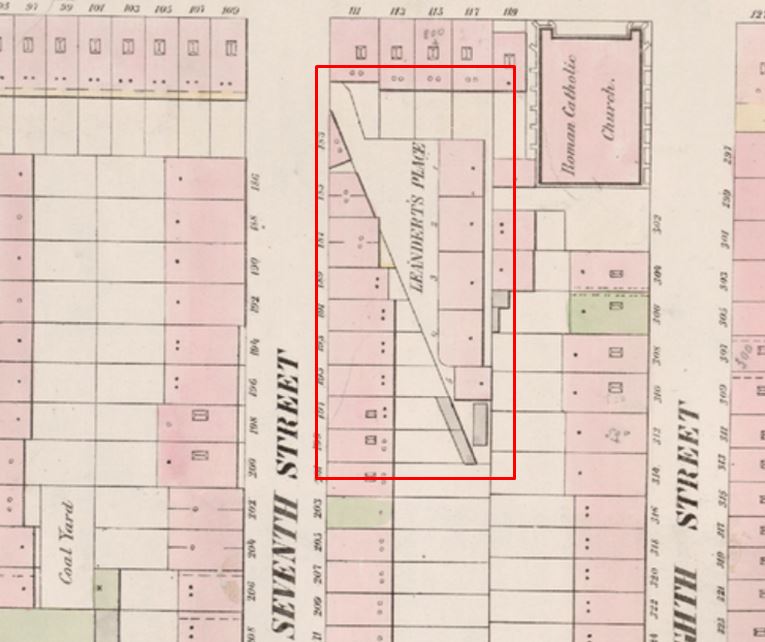 The alley was situated within the Leanderts Farm until the early to mid 19th century, and was appropriately named Leandert’s Place, which it was called until the 1890s when it was renamed 7th Street Place. Documented on the above 1853 Perris map, we can see the five tenements in the middle of the block with access from the northeast corner of 7th Street and Avenue B. The Roman Catholic Church on the corner was about at its halfway mark of construction by then. 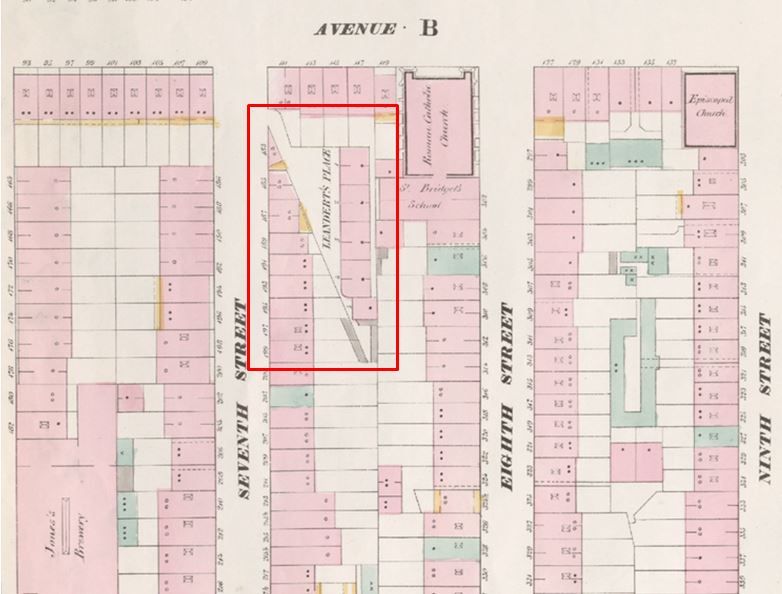 Within the following decade, St. Bridget’s School was constructed on the 8th Street side of the block, abutting the rear of the Roman Catholic Church on the corner. The alley retained its shape and tenement buildings during this expansion, as seen in the above 1862 Perris map. 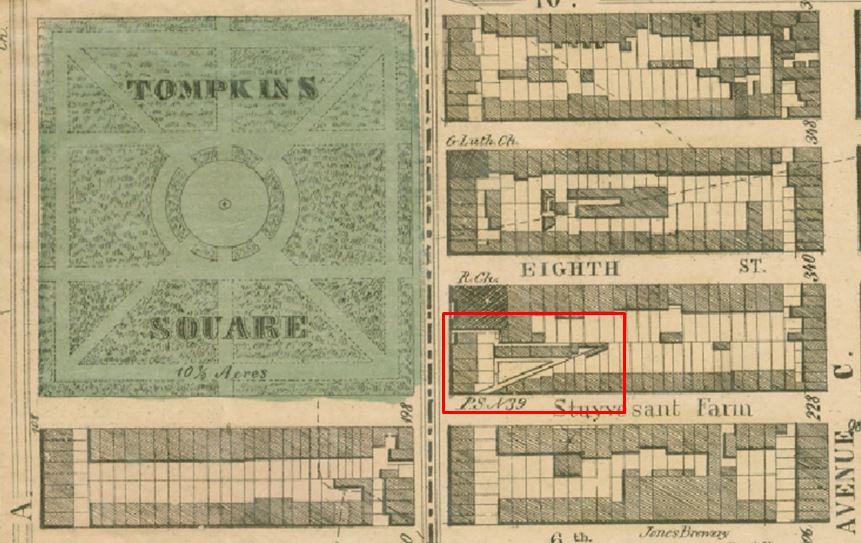 Next we have the above 1867 Driggs map, which is a bit less specific though offers us an outline of five tenements lining the north side of the triangular shaped alley. 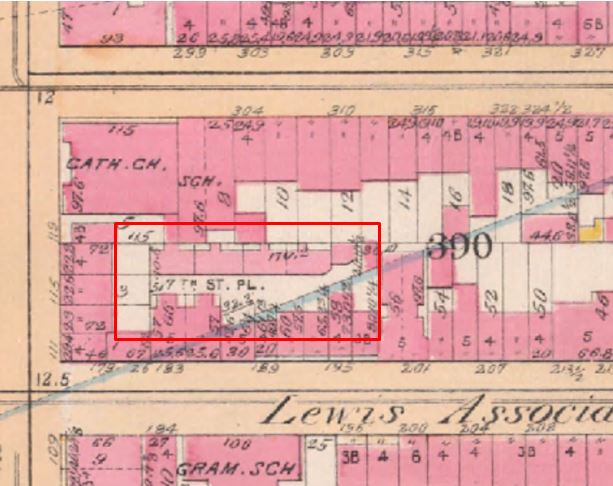 This 1897 Bromley map indicates that by the 1890s, the alley was renamed 7th Street Place, and it was no longer angled from the northeast corner of East 7th Street and Avenue B; the triangle shape was lost and the alley in front of the tenements became parallel to the street grid. It appears that access to the tenements was provided through an alleyway between the Catholic Church and No. 119 Avenue B. The triangular shape was cut off by the construction of tenements on the west side at Nos. 181-185 East 7th. Additionally, an old law tenement was erected at No. 201 East 7th Street, thereby blocking in the tenements on the east side from the open interior of the block. 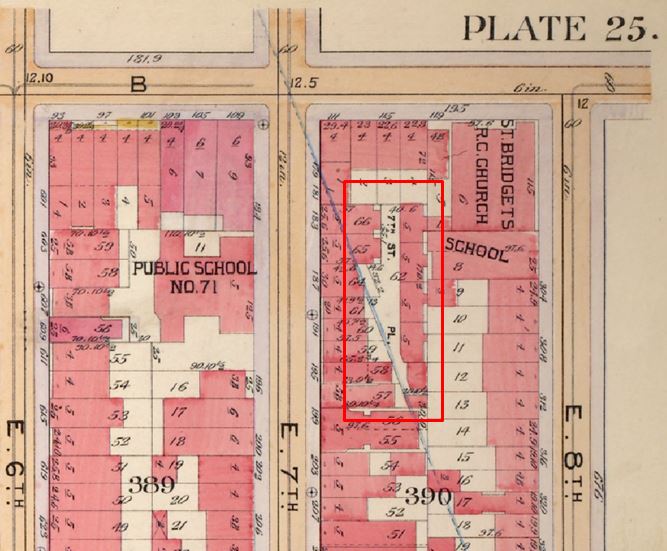 As seen in the above 1899 Bromley map, by the turn of the century the alley became closed off a bit more as rear additions to the street-facing buildings were constructed. At this point, the Catholic Church was officially named St. Bridget’s R.C. Church on the map. 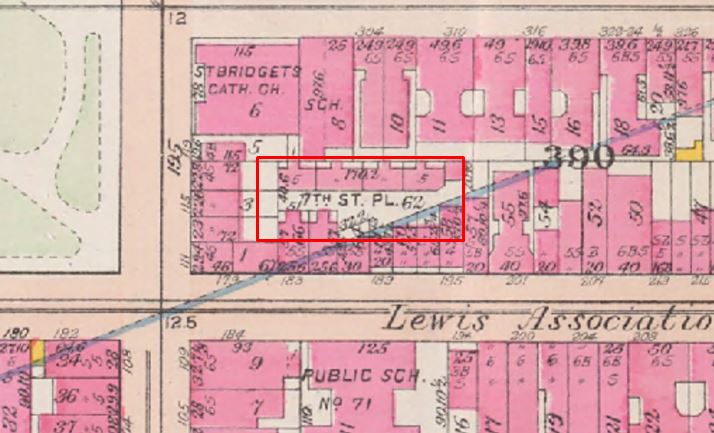 The above 1911 Bromley Map indicates the demolition of several rowhouses along east 8th Street and construction of old law tenements in their place; this occurrence redefined the context of the block by closing in the tenements along 7th Street Place. 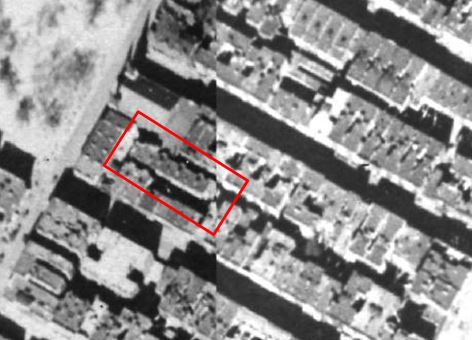 The above 1924 aerial view reveals that the alleyway was essentially eliminated by this time, and demolition applications were filed in 1936 to remove eight buildings on lots 62, 65, 66 and 67, which included Nos. 1 to 9 Seventh Place, the five tenements on 7th Street Place. In 1941, dwellings along Avenue B were demolished and the site was to be used for a post office, though plans changed and a school was constructed in its place, as indicated by a 1954 New Building application filed by St. Brigid’s (notice change in spelling). 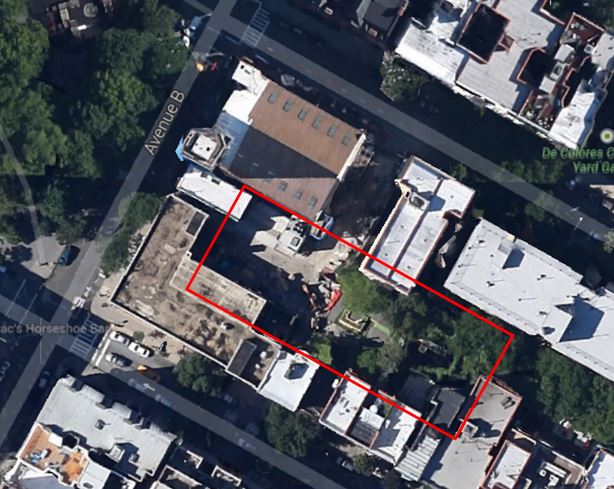 The above Google Maps view shows that the site of the former 7th Street Place and tenements is currently utilized as a playground for St. Brigid’s School.

New York as it Was and Is, published in 1876, refers to the street as “St. Bridget’s Place” even though this is not indicated on any historic maps we can find. However, a Google Books search reveals that the birth certificate for Leonie Gilmour, a New York City journalist and editor, states that she was born in 1873 at 185 Seventh Street, St. Bridget Place, offering us another term for the vanished alleyway.