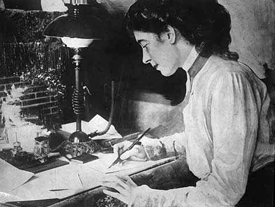 There are still a few seats available for our free public program this Thursday evening at the Jefferson Market Library. The subject is the life and times of Rose Pastor Stokes, known to our presenter, Kate Pastor, as “My Great Great Aunt Rose of the Lower East Side.”

Kate herself is a Bronx-based journalist who will present an oral history and slideshow of this socialist, feminist activist whose life went from factory worker to newspaper reporter to high society to defendant in federal court.

Rose Harriet Wieslander was born in 1879 in what was then Russia but is now Poland. When she was 3 her mother moved to London and remarried, and Rose took her stepfather’s last name, Pastor. When she was 12 her family immigrated to the United States, settling in Cleveland, Ohio, where she worked in a cigar factory.

In 1903,when Rose was 24, she moved to New York’s Lower East Side and worked at the Jewish Daily News. Two years later she married J.G. Phelps Stokes, a wealthy Episcopalian philanthropist whom she had interviewed for the newspaper. The two of them became involved in socialist causes, and joined the Socialist Party of America.

In 1909 the couple moved to Connecticut, but toured the country, lecturing on socialism at colleges and universities. They returned to New York City’s Lower East Side frequently, involving themselves in labor strikes by hotel, restaurant, and garment workers. Rose also worked with Margaret Sanger and Emma Goldman to make birth control available to low-income women. Because of her years of working with activists of the Lower East Side, she earned the nickname, “Rose of the Ghetto.”

An opponent of U.S. involvement in World War I, Rose was convicted of violating the Espionage Act of 1917 and sentenced to 10 years in prison, but the government dropped the case on appeal. In 1925 Stokes divorced Rose, after several years of them drifting apart. In 1929 she married Jerome Isaac Romaine, a Jewish immigrant from Rumania, who was a language teacher, and they lived at 215 Second Avenue in the Lower East Side.

Rose died in 1933. Her memorial service was held at Webster Hall.

If you would like to attend Kate Pastor’s program on her great great Aunt Rose, please rsvp here.