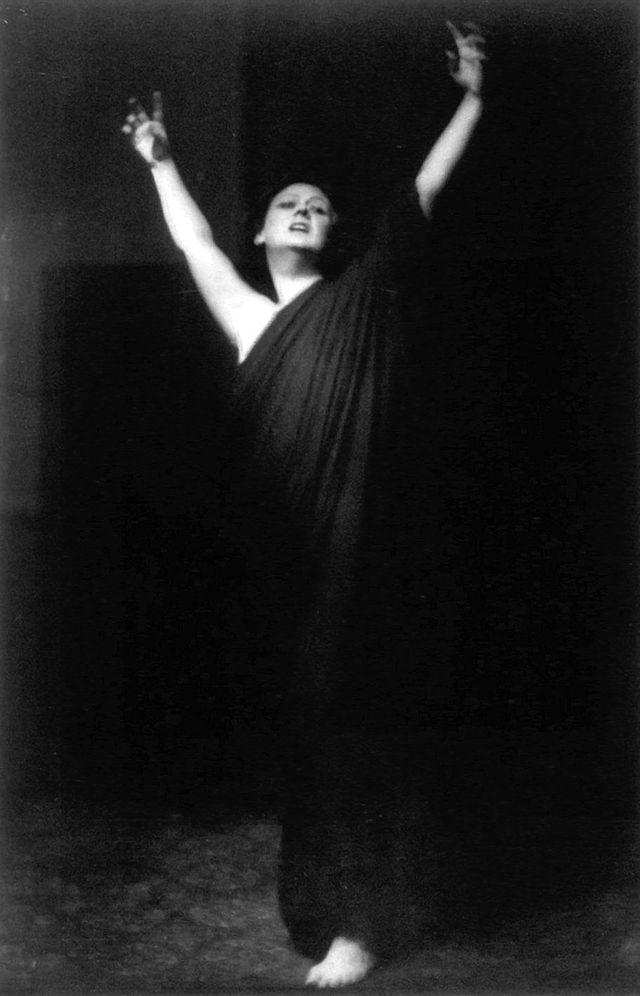 (This post is part of a series called Village People: A Who’s Who of Greenwich Village, which will explore some of this intern’s favorite Village people and stories.)

Isadora Duncan was the creator of what is now called ‘Duncan Dance,’ and an incredibly important figure in modern dance. She was born in California in 1877, soon before her father lost his bank job, and the family became impoverished. Her parents divorced, and she and her sister Elizabeth moved with their mother to Oakland. There, her mother taught piano and music, and both Isadora and Elizabeth gave dance classes to local children to earn extra money.

In 1896, Duncan came to New York to become part of Augustin Daly’s theater company. She soon became disillusioned and unhappy with the pantomime forms the company promoted. She left for London in 1898, where she found work in the drawing rooms of the wealthy, and inspiration in the Greek section of the British Museum. The money she made performing allowed her to rent a studio, and begin choreographing large stage performances. She travelled to Paris in 1900, where Loie Fuller discovered her, and invited her to tour Europe with her. Despite her dislike of the commercial aspects of touring and public performance, she spent most of her life this way, touring Europe as well as North and South America.

Still, she felt that education was her true calling. She opened her first dance school for women in Grunewald, Germany, in 1904. The ‘Isadorables’ (Anna, Maria-Theresa, Irma, Lisel, Gretel, Erika, Isabelle, and Temple: the women who would continue Duncan’s legacy) all studied here. Later, she also established a school in Paris, which was short-lived due to the outbreak of the First World War. In 1914, she took a studio and apartment on Gramercy Park, at the northeast corner of the park and Fourth Avenue (now Park Avenue South). While back in New York, she became part of the bohemian scene in the Village, frequenting Hotel Brevoort at the northeast corner of Fifth Avenue and 8th Street (which was torn down in 1954). The hotel was known to attract people like Mark Twain and Margaret Sanger, who gave a speech defending the use of birth control there the night before going on trial in 1916. It also had a basement café, which was patronized by everyone from Duncan to Emma Goldman, Edna St. Vincent Millay, Mable Dodge, Djuna Barnes, Mina Loy, John Reed, and Crystal and Max Eastman, among others. She was eventually exiled from the United States, however, because of her Soviet sympathies. From that time on, she moved from place to place in the Soviet Union and Western Europe.

Duncan died in 1927, at the age of fifty. She was taking a drive in Nice, France, when her scarf was caught around the wheels and rear axle of the car, breaking her neck. Before her death, however, she’d had a huge impact on modern dance as we now know it. Although her European schools were not often long-lived, her students, including her adopted daughters Maria-Theresa, Anna, and Irma, continued to teach and spread her style of dance, especially in New York and Paris. Through Elizabeth Duncan (Isadora’s sister), Jarmila Jerabkova brought Duncan dance to Prague, where the style is still prominent.

A source for this post can be found here.