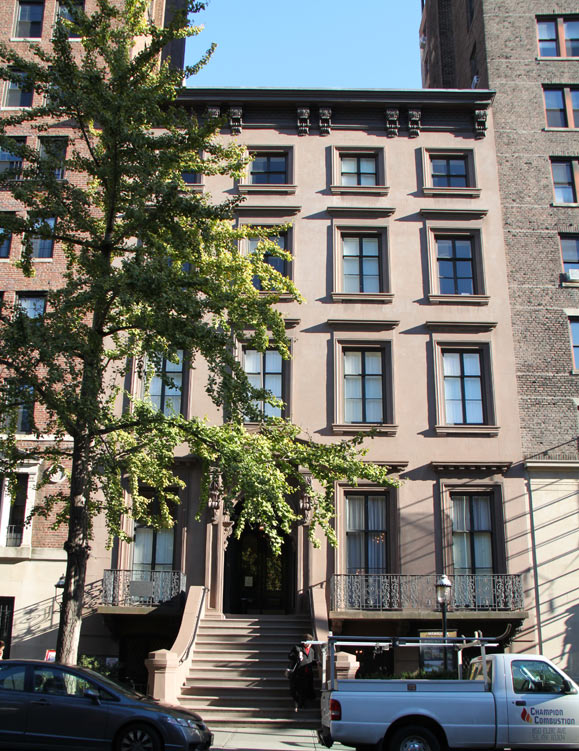 Today, the building that houses the Salmagundi Club at 47 Fifth Avenue is a bit of an odd duck. At four-and-a-half stories, the 1853 Italianate style rowhouse is sandwiched by taller apartment buildings on either side. To someone walking by, the stately old brownstone may almost look like the Little House from the Stuart Little story.

What’s it doing all by itself?

Well, it actually wasn’t always by itself! Here’s a fantastic image of this corner in 1925 showing the Irad Hawley House (as it’s also known) next to its two equally stately neighbors to the north. The 90-year-old photo also shows the rowhouses just around the corner on 12th Street, which still exist.

Nos. 51 (corner building) and 49 Fifth Avenue were not long for this world, as they would soon be razed to make way for the 19-story apartment building that stands on this corner today. GVSHP research indicates that that building was constructed in 1929 to the designs of Thomas W. Lamb.

A New York Times article from 1928 (“Apartments Claim Old Family Homes”) mentioned the loss of these two fine dwellings. According to the writer, the corner building was once the home of H. C. de Rham, member of an influential family that had, back in the 1850s, purchased the old Brevoort mansion on the northwest corner of Fifth Avenue and Ninth Street. At the time the article was written, that mansion had already been knocked down some three years prior, and was replaced by the Fifth Avenue Hotel.

Here’s a slightly older photo from 1911. Today’s Salmagundi Club is just visible on the far right of the photo. As you can see, Fifth Avenue was chock full of three- and four-story buildings just over a century ago.

Interested in learning more about this beautiful building of yesteryear? Check out its designation report (written by the Landmarks Preservation Commission in 1969) on our Resources page. GVSHP also holds events in this space from time to time; don’t miss out on all of our great programs!

You can also read more from our “then and now” series by clicking here.

One response to “Fifth Avenue and 12th Street, Then & Now”