the Grid is highlighting the winners of the 2015 Village Awards in the lead up to the June 17th Annual Meeting & Award Ceremony. Previous entries include Barbara Shaum and Bonnie Slotnick Cookbooks. Today we will look at the many notable accomplishments of Villager and Fortune Society founder David Rothenberg.

David Rothenberg has lived in the Village for over 50 years. He began his career as a producer and publicist for many memorable productions on and off Broadway at many Village theaters, including The Public Theatre, the Actor’s Playhouse, and the Astor Place Theater. He worked on such plays and musicals as the original Hair, John Gielgud’s The School for Scandal, the original The Boys in the Band, Blue Man Group, and Richard Burton’s Hamlet.

In 1966 he read a script that would change the lives of thousands of people. The script for a play called “Fortune and Men’s Eyes” was written by a formerly incarcerated playwright named John Herbert. David says, “I read it in one sitting and was devastated. I wrote to Herbert right away and told him the play gave me the feeling of being trapped in a pit full of cobras.” Driven by his own deep sense of this play’s importance to the world in revealing the realities of the prison system and its horrors, David decided to take an enormous risk and put his own savings into producing this controversial play. The play opened on February 23, 1967 in the small Greenwich Village theater, the Actors’ Playhouse.

A few weeks after the opening, David began inviting the audience to stay after the play for a talk-back session with the actors. At one point during these sessions, a woman in the audience questioned whether the play exaggerated the brutality of life in prison. In that moment, someone who had spent 20 years in prison, who was also in the audience, set her straight – affirming that the play was a perfect characterization of his experiences in prison. Over time, the talk-back sessions became even more significant and started gaining the attention of groups interested in the topic. One day, they were invited to appear on the David Susskind talk show, and David Rothenberg spoke about his intention to create The Fortune Society to advocate for people impacted by the criminal justice system. The next day, David Rothenberg’s Broadway office had a huge line of over 200 formerly incarcerated people asking for his help.

So, quite literally, out of that play originally performed in a Greenwich Village theater in 1967, The Fortune Society, now a immensely successful non profit organization that helps countless people who are incarcerated and previously incarcerated, was born.

Initially, David saw The Fortune Society primarily as an adv 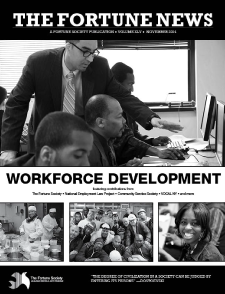 ocacy group. According to David, “I felt that if we could educate the public we could change things.” Over time, The Fortune Society grew in direct response to the needs of those coming out of prison.

David began producing The Fortune News featuring articles written by those who had been in prison. While the NYS Department of Corrections initially banned distribution of The Fortune News, with help from some students at Columbia University, David took the agency to court and won the case of Fortune v. McGuinness. The Fortune News remains one of the most important newsletters for the currently and formerly incarcerated population, and it is still distributed to thousands of people in prisons twice per year.

Not long after that came the Attica prison riots. On September 10, 1971, David was one of the few outside observers who was invited into the yard surrounded by over 1,000 incarcerated individuals and 40 guards they had held hostage. Although Attica ended tragically, it succeeded in raising public awareness of the horrors of the prison system and further raised David’s profile and the stature of The Fortune Society as one of the few organizations willing to speak on behalf of those directly impacted by the criminal justice system.

The Fortune Society attracted a new influx of volunteers and clients after the Attica riots and significantly expanded its operations. In the decades following, The Fortune Society continued to grow under David’s leadership, increasing its number of clients served each year and building a broader base of funding.

In 1989, David was one of the first openly gay people to run for City Council. Although he lost, he became a huge inspiration to the gay community, particularly in Greenwich Village – in a way, to many he represented New York City’s own version of the iconic Harvey Milk. Last year, David was honored at the City Council’s annual LGBT Pride event. According to gay City Councilman Daniel Dromm, “David [Rothenberg], as an openly gay man, has devoted his life to helping the formerly incarcerated reenter society. LGBT people were similarly rejected from society and, in many ways, were at one time outlaws, too.”

In 2002, The Fortune Society opened its first housing facility in West Harlem called the Fortune Academy (known as “the Castle” for its

Gothic architecture), offering 60 emergency and transitional beds to formerly incarcerated men and women. In 2008, after the building had been providing housing for just over five years, David Rothenberg produced another groundbreaking play, “The Castle” which played Off Broadway for over a year.  The play features personal accounts of formerly incarcerated individuals who lived at the Castle.  Again, David used the play as a way to engage audience members in talk-back sessions with the cast.  He continues to direct the play, not only in New York City, but across the country in prisons, universities, churches, and other community-based organizations.  Every time the play is performed it has a profound and lasting impact on those who see and experience it.

In 2012, David Rothenberg authored a book, “Fortune in My Eyes” which recounts the details of his extraordinary life.  The chapters capture him perfectly: Attica, The Theater, Broadway, “Fortune and Men’s Eyes,” The Fortune Society, Prisons, Homo, Social Change, Candidate and Transition, The Fortune Academy, and “The Castle” A play.

David has won dozens of awards and recognitions. Most recently, on April 16, 2015, David and leaders of The Fortune Society accepted the 2015 Morton Deutsch Award for Distinguished Contributions to Social Justice from Columbia University Teachers College.