Off the Grid is highlighting the winners of GVSHP’s 2015 Village Awards, in the lead up to our June 17th Annual Meeting & Award Ceremony. Previous entries include Barbara Shaum, Bonnie Slotnick Cookbooks, and David Rothenberg. Today’s winner that we will be profiling is The Chaim and Renee Gross Foundation.

The Chaim and Renee Gross Foundation has previously been featured on both this blog and was on the 2015 GVSHP House Tour. Sculptor Chaim Gross and his wife Renee purchased 526 LaGuardia Place in 1963 after living and raising their children on the Upper West Side. Gross had long had his studio in Greenwich Village at 63 East 9th Street, but with the acquisition of the new building – an 1830s townhouse that had been adapted to industrial loft-style usage – he was able to incorporate a living and workspace in one structure. The Grosses converted the building back to residential living, and added a sculpture studio on the ground floor.

Greenwich Village was the neighborhood where artists of Gross’s generation worked, lived, and spent time together. The Whitney Museum opened in 1931 on West 8th Street, the site that later became the New York Studio School of Drawing, Painting and Sculpture, as it remains today.  Greenwich Village was the center of artistic life in New York City and where Chaim Gross chose to live and work.

The Foundation is a special Village resource. His studio, which remains as it was during his lifetime, and the third-floor apartment where he and his family lived, were opened to the public after his death. The building embodies the idea of a creative life and enables those who visit to experience a way of life immersed in art.

On view are Gross’s sculpture and drawings, as well as objects from his extensive collection of African and modern American art, featuring paintings by artists such as de Kooning, Chagall, Gorky, Avery, Raphael and Moses Soyer, and others, many of which had been received as gifts. The Foundation has holdings of close to 10,000 objects – art, photographs, books, letters, clippings, catalogs, etc. Its mission is “to encourage artists, students, and the community to actively engage with these artworks and archive and to learn about Gross, his contemporaries, and the history of American art.” The Foundation organizes cultural activities and hosts exhibits, gallery talks, book parties, lectures, school group classes, and other events to engage with the public and neighborhood.

The building itself is also unique. Gross designed the ground floor studio, including the dramatic skylight, and it leads to a permanent installation of his major wood and marble sculpture spanning sixty years. The second floor houses a temporary exhibition space as well as a library and archives. The third floor remains a living area featuring an installation of Gross’s American, European, African, and pre-Columbian art collections. The Foundation offices occupy the fourth floor. 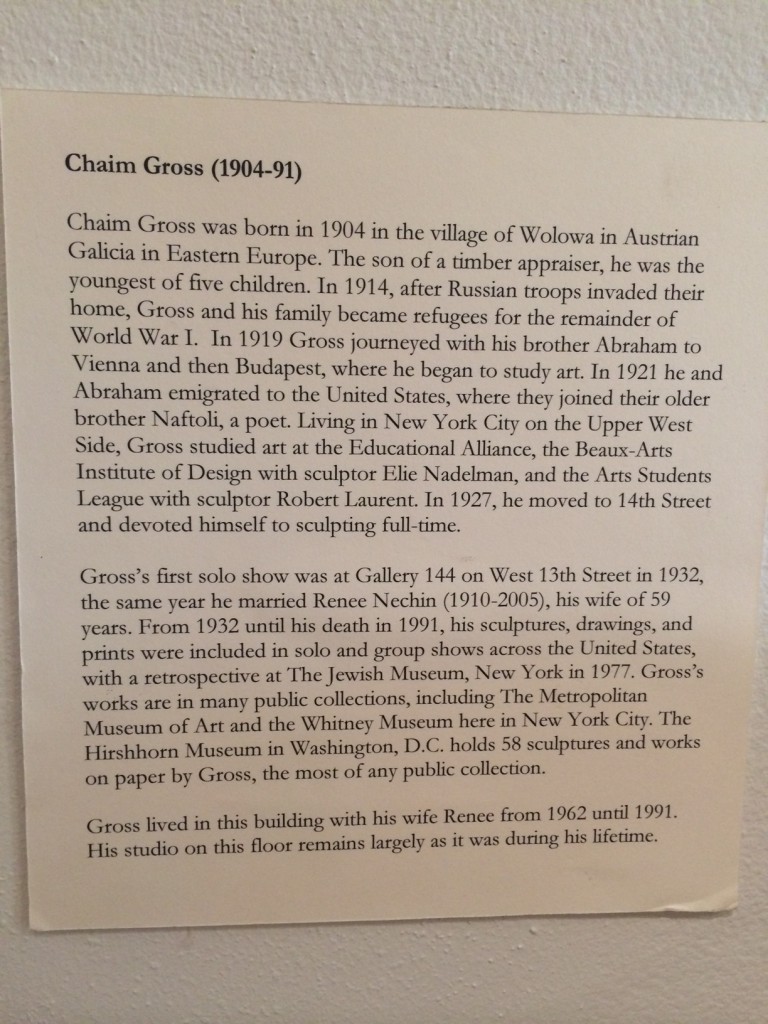 Please join GVSHP as we present The Chaim and Renee Gross Foundation with a 2015 Village Award. Mimi Gross, Renee and Chaim’s daughter, an artist in her own right, and the very active President of the Foundation’s Board of Directors, and Susan Fisher, the Foundation’s Executive Director, will be on hand to accept the award.