Shirley Hayes is a pioneering figure in the preservation of the Village and the fight against Robert Moses’ planned Lower Manhattan Expressway through Washington Square Park.  She was born on June 15, 1912 and would have been 103 today.  Back in the year 2000, GVSHP had the honor of interviewing Mrs. Hayes as part of our Oral History Project.

Originally from Chicago, Hayes came to New York City in 1932 during a holiday from school.  She was studying at the Goodman Theater and, in anticipation of graduation, Hayes and a few friends decided to come to New York to obtain theater jobs before going back to finish.  She never returned from that trip.

“Well, I was graduating and this was the holiday period so a couple of kids and myself decided we’d be very smart and go to New York and get a job right off and then go back and pick up our hats or whatever they did. It was the holiday time for schools. So some of us went to New York and everybody went home except me. [Laughs] I wanted to stay here because if I go home I’ll never get back here.”

It wasn’t until the 1950’s that Hayes became involved with neighborhood preservation.  A mother of four sons, Hayes and other women in her neighborhood were appalled by the proposed expressway expansion through Washington Square Park, an area where they frequently took their children to play. They were worried about the potential dangers of having a motorway so close to these frequented playgrounds and began attending planning board meetings with the other mothers.

“I lived on Sixth Avenue then. [Long pause as she attempts to remember.] There was a playground right off the park…. When I read the papers that morning, I came to the park and met the ladies there who had kids…. We started being outraged immediately…. That night I think there was a meeting of the Planning Board, which was new. So we decided to go down to the Planning Board meeting that night.”

Moses and the city had planned to expand 5th Avenue with a four lane expressway going through Washington Square Park, and new housing developments on the other side of the park, as part of an urban renewal plan.  After the planning board meeting, Hayes and the other mothers became “hot and bothered” by the proposal and decided to take action against it.  They began by contacting schools, churches, and other parents, many of which had no idea that these plans by the city were being put into effect.

Hayes and her group began sending letters to more schools and other civic organizations informing them of the proposal and encourage them to fight not only against it but to also permanently close automobile traffic through Washington Square Park (it had a small road going through it at the time).  For seven years, Hayes and her group built themselves up; what started as a grassroots campaign of concerned parents became an organized initiative.  They responded to opposition to their efforts from both the media and the city government, and helped shift public debate on the size of the road and whether it should even exist in the park.

Hayes’s group found support from figures such as Eleanor Roosevelt (a one-time Washington Square resident), then congressman and future mayor John Lindsay, and head of the Village Independent Democrats and another future mayor Ed Koch.  Eventually Hayes was joined by Ray Rubinow and his Joint Emergency Committee to Close Washington Square to Traffic and in 1958 had managed to convince the city to close the park to automobile traffic for a six month trial period.  In August of 1959 all of Hayes’s efforts paid off and the park was permanently closed to automobile traffic. 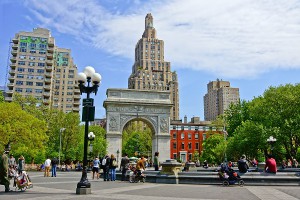 It is through efforts like those of Hayes that GVSHP was founded and continues to thrive in our mission to protect the Village.  If you would like to learn more about Hayes, as well as listen to or read the transcription of our interview with her and other major figures in Village preservation, be sure to check out our Oral History Collection on the GVSHP website.