This is the final post on the 2015 Village Awards. Previous 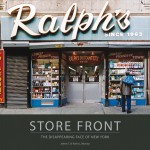 posts highlighted Barbara Shaum, Bonnie Slotnick Cookbooks, David Rothenberg, The Renee and Chaim Gross Foundation and the 201 East 12th Street Renovation. Join us tomorrow as we honor these awardees at the 2015 Village Awards. Today we look at the 2015 Regina Kellerman Award Winner – James and Karla Murray.

Each year we honor one winner with the distinction of the Regina Kellerman Award. Regina was the first Executive Director of GVSHP with a long list of preservation accomplishments attached to her name. According to GVSHP Executive Director Andrew Berman, “Gina was the first director of the Greenwich Village Society for Historic Preservation and she laid the foundation for subsequent work that we and many other preservationists did. Her work on the book ‘The Architecture of the Greenwich Village Waterfront’ and the unprotected waterfront between 14th and Houston Sts. was the basis of the downzoning of the Far West Village in 2005 and the landmarking in of much of the area in 2006.”

The 2015 Regina Kellerman Award Winner is James and Karla Murray. East Village residents for over 20 years, what began as a personal interest in documenting their surroundings and disappearing local businesses has turned into two published books and a third “10 years later” book now in the works. They have formed lasting personal relationships with business owners and have a mental vault of incredible stories about each business to share.

James & Karla are extraordinary photographers who focus on storefronts and architecture.  They have captured and preserved scores of Village locales (and thousands of NYC locales), a substantial number of which have been closed since the photos have been taken. Their photographs of these storefronts, and the stories of the people that ran them, are now all that remains of many of these important pieces of the fabric of our City, as we lose more and more every week.

Their book New York Nights was the winner of the New York Society Library’s 2012 New York City Book Award. James and Karla Murray’s work has been exhibited in major institutions and galleries, including solo exhibitions at the Brooklyn Historical Society, Clic Gallery in New York City, and Fotogalerie Im Blauen Haus in Munich, Germany, and group shows at the New-York Historical Society. Their photographs are included in the permanent collections of major institutions, including the Smithsonian Center for Folklife and Cultural Heritage, the New York Public Library, and NYU Langone Medical Center. Their photography has appeared in the New York Times, New York Post, Daily News, and The New Yorker.

One response to “Village Awardee — James and Karla Murray”