Here at Off the Grid we are primarily concerned with Greenwich Village, the East Village, and NoHo, but tomorrow we will be happy to help our neighbors celebrate an important anniversary. It was on August 14, 1973, that the Landmarks Preservation Commission designated the SoHo Cast Iron Historic District.

According to that designation report:

The hyphenated name, “SoHo-Cast Iron” was chosen for the designation of New York City’s twenty-third Historic District in order to suggest some of the diversity of the area. The “Cast Iron” portion of the name refers to the unique collection of cast-iron structures located within the District. “SoHo” meaning “South of Houston,” is the acronym adopted by a group of artists who moved, in the 1960s, into what then seemed to be a doomed neighborhood. They have given it a new life, making feasible the preservation of an irreplaceable part of our cultural heritage.

The use of the double name is also intended to suggest that, even architecturally, the District contains more than just cast-iron buildings, important though they are. Indeed, the District contains some of the City’s most interesting extant examples of brick, stone, and mixed iron-and-masonry commercial construction of the post-Civil War period. 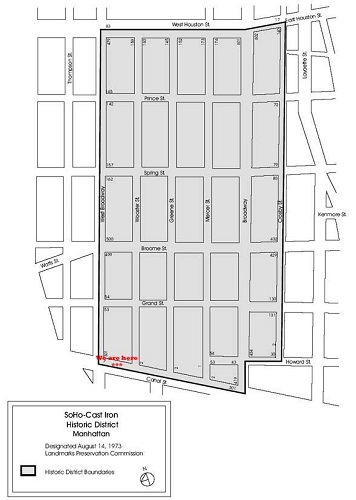 The collection of well-preserved cast-iron structures, now unrivalled in the world, demonstrates how cast iron was used in 19th-century commercial construction. It also illustrates in a tangible way all sides of a great aesthetic debate. Some of the more thoughtful 19th-century theorists hoped, through a synthesis between engineering and architecture, to develop a truly representative contemporary style.

One of the reasons the neighborhood seemed “doomed” was the planned Lower Manhattan Expressway. This unpopular project, conceived by Robert Moses, then chairman of the Triborough Bridge and Tunnel Authority, would have cut through Greenwich Village and SoHo with catastrophic impact to neighborhoods and to historic architecture.

From the early days as the Bayard family farm, to today’s trendy, pricey mix of retail, residential lofts, and perhaps a few surviving art galleries, SoHo has seen it all. And we are grateful to be able to see those magnificent buildings saved by preservation efforts for years to come.