There are hundreds of individual landmarks in Manhattan alone – many in Greenwich Village, NoHo, the East Village and surrounding areas. We’re taking a look at some of these important sites, one of which is the 203 Prince Street House.

The Landmarks Preservation Commission held a public hearing on the proposed designation of 203 Prince Street on September 25, 1973, at which time there was no opposing testimony.  They then voted on February 19, 1974 to designate the building, a three-story house with red Flemish bond brickwork and brownstone basement, an individual New York City landmark. The picturesque townhouse was built in 1833-34 in a transitional style between Federal and Greek Revival. Leather inspector John P. Haff owned the property and several additional lots on the black. The land on which 203 Prince Street stands (and the rest of the block, which he owned) had formerly be 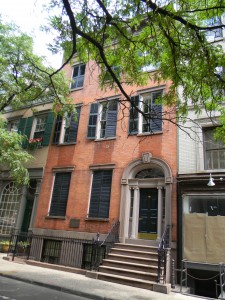 203 Prince Street is one of the few surviving examples of its type. Its striking entrance set above a high stoop is one of the many characteristically federal features of the façade, which also includes the flemish-bond brickwork (alternating long and short sides of the brick exposed) on the two original lower floors.

The windows of the house, with six-over-six sash, are crowned by lintels with cap moldings, which by contrast are typical Greek Revival features. All windows have interior shutters and exterior blinds. The third floor, added in 1888, replaced the original attic story with peaked roof and dormer windows, more typical of Federal-style houses. Wrought-iron area railings and hand railings at the stoop, which have openwork cage newels with pineapple finials, are Federal-style decorative features that add to the elegance of the house.

The Commission found that, among its important qualities, the 203 Prince Street House is one of the few surviving examples of its traditional architectural style, that it has been sympathetically restored, and that is a characteristic example of an upper middle-class residence of the 1830s.

In 2016, GVSHP got the house and about one hundred seventy-five neighboring structures landmarked as part of the third and final phase of our proposed South Village Historic District, known as the Sullivan-Thompson Historic District.  In 2017, the longtime owner of the house generously allowed us to include it on our annual Benefit House Tour.

Click here to read more about the findings and the designation of this building by the Landmarks Preservation Commission.

One response to “203 Prince Street: An Impressive Blend of Federal-Style and Greek Revival Architecture”