This post is the first of a three-part series called Histories of Fourth Street, from East to West, a collaboration between GVSHP and the students in NYU’s Fall 2015 Intro to Public History course. Each group of students was tasked with preparing a presentation around a particular topic concerning a section of Fourth Street in conjunction with the public program held on Wednesday, December 16th.  Each group was also tasked with sharing their discoveries with us on Off the Grid.  The following post was written by Kaitlyn Tanis, Nick Swedick, and Amanda Foote

Before it was called West 4th Street, the northwestern section of this street between Gansevoort Street and Seventh Avenue was called Asylum Street, named for the New York Orphan Asylum (NYOA). Though the asylum’s presence is no longer memorialized in the street name, there are many facets of the NYOA story that resonate today, from the legacies of the children’s wards and the founders, to the childcare and social service movement. In our research we found that the past is still part of the present, and stories from our history can be found woven throughout the streets of Greenwich Village.

On March 15, 1806, a group of upstanding women, including Elizabeth Hamilton and Isabelle Graham, gathered at the City Hotel in order to address a problem that bothered them greatly, the plight of orphaned children in New York City. Together that day they founded the Orphan Asylum, and by May of that year they had rented a home on Raisin Street where 16 children and a “pious and respectable man and his wife” who looked after them were housed.

Quickly, the Asylum outgrew this “small two story frame house,” and before long the Society had arranged for the purchase of a plot of land north of their first location. Construction began in 1807. The second home of the Asylum was a 50 feet square brick building capable of housing 200 orphans. It was 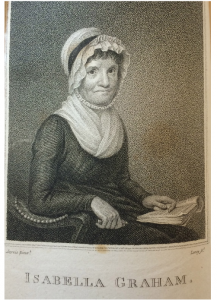 built with funds from the state legislature, the City Corporation, private donations, church collections and two bank loans procured by the founders with delayed interest.

Although Greenwich Village was a good choice for the NYOA’s launch, environmental and health pressures soon forced yet another move. In 1835 the Society purchased land in the Bloomingdale village, at what is now 73rd Street and Riverside Drive. The rising value of land in Greenwich allowed the Society to purchase this land at a profit. Construction on a new asylum began immediately, and was concluded by 1837.

After it’s move to Bloomingdale, the NYOA underwent many more changes, and several more moves. The organization evolved to become the Graham Home for Children, and merged with Windham Child Care to become Graham Windham – an organization that continues to work at improving the lives of children in care today.

So the NYOA is an agency with a substantial reach, and over two hundred years of history, its roots are here in the village, but throughout it’s history this simple organization’s reach has grown.

To see the students’ presentation, click HERE.  Special thanks to NYU Professor Peter Wosh for continuing this program with GVSHP.

One response to “The New York Orphan Asylum”