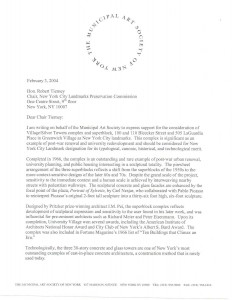 12 years ago tomorrow, our colleagues at the Municipal Arts Society sent a letter to the Landmarks Preservation Commission supporting our request for landmark designation of the Silver Towers/ University Village site. This superblock, located between Houston Street and Bleecker Street, LaGuardia Place and Mercer Street, contains three buildings designed by renowned architect I.M. Pei, constructed between 1964 and 1967. The land was part of a slum clearance program, begun in 1953 by controversial urban planner Robert Moses. Getting these kinds of statements of support from preservation groups, elected officials, community groups, etc. is a key part of how we go about building a coalition to get landmark designation.

GVSHP was was the original proponent and proposer of this landmark designation. You may wonder why GVSHP supported landmark designation for this urban renewal, vaguely ‘brutalist’ piece of modern architecture, but you can read more about that here. In fact we are so enamored of this site, we have written about its beginning, its anniversary, its public art, and its lasting impact.

Ultimately, the LPC agreed, and landmark status was designated on November 18, 2008.

Among the many other benefits o landmark designation of Silver Towers, it prevented NYU from adding a fourth 400 foot tall tower on the site along Bleecker Street.

Of course, the surrounding area is threatened by NYU’s massive expansion plan, something GVSHP and area residents fought and still oppose. But there are still many other issues that need your support. Please visit this special page on our website and get involved in the issues that mean the most to you. We make it easy for you to send letters to elected officials so your voice can be heard.

One response to “12 years ago: Support for designation of the Silver Towers Complex”