Tomorrow will mark one year since the tragic gas explosion on Second Avenue and 7th Street street that killed two people and led to the collapse and destruction of three buildings and created a gap in our East Village community.  Many groups and people came together with heroic rescue efforts in the immediate aftermath of the explosion and fire and in searching through the debris.  Even more people and groups united in purpose to fill the void, by giving needed items or connecting to services and providing and place for the displaced to live temporarily.

Today is also the 105th anniversary of the Triangle Shirtwaist Factory fire just a few blocks away on Washington Place, which caused the deaths of 146 garment workers.  Most of the victims were immigrants.  Because the owners had locked the doors to the stairwells many of the workers could not escape and jumped from the high windows. The fire led to legislation requiring improved factory safety standards. The Brown Building at the corner of Greene Street and Washington Place has been designated a National Historic Landmark and a New York City landmark.

A similar motivation of monetary greed is reportedly a factor in the charges against the landlord of 121 Second Avenue.  The explosion there led to the deaths of two people, patron Nicholas Figueroa  and 27 year old employee Moises Ismael Locón Yac.  Illegal gas hookups had allegedly been installed to evade detection and keep the reported $6000 a month tenants upstairs with service.   Five people were arrested in February in connection to this tragic incident. 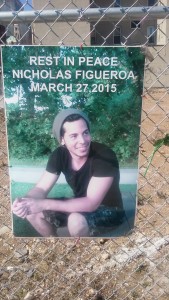 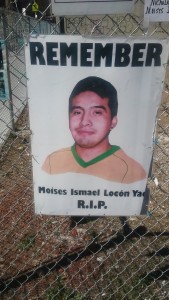 Today, a strong community spirit of remembrance is still in evidence by the makeshift memorial and shrine the site quickly became.  Two faux graves remain at the corner of 2nd Avenue and 7th Street.

Numerous people lost their homes and local businesses were destroyed.  Although not part of the immediate foot print of the three buildings that were demolished,  many have had a hard time since the explosion. One of our Business of the Month awardees, B&H Dairy was forced to close for months because of the impacts.  Stage Restaurant will not be re-opening.  Pommes Frites a mainstay on Second Avenue is reopening in a landmarked building in the South Village Historic District.

The owner of  the building  that once occupied 123 Second Avenue has put up the site for sale for almost $10 million.  As to what the site might hold in the future, it is within the East Village/LES Historic District GVSHP and our partners helped get designated, so nothing can be built without a public review and approval process. 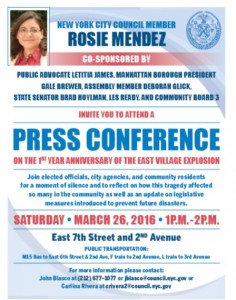 Tomorrow, Saturday March 26th,  GVSHP will join Council Member Rosie Mendez, other elected officials and community members at a Press Conference on the one year anniversary of the East Village explosion.  Besides remembering and mourning the dead and injured, as well as recognizing the heroic efforts of first responders and volunteers, Rosie Mendez will underscore her actions to ensure such a tragedy never happens again.

Like the legislative action in the aftermath of the Triangle Shirtwaist Factory fire, the Second Avenue explosion and other incidents, have spurred the NYC Council to introduce a slate of bills to improve installation and inspection protocols regarding gas line connections that will be important steps towards increasing public safety.  May it never happen again.

2 responses to “One Year After the Second Avenue Explosion”