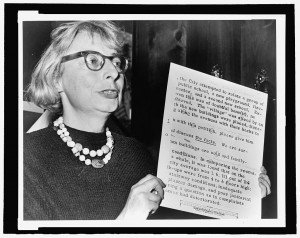 Here at GVSHP, we have a special connection to Jane Jacobs (May 4, 1916 – April 25, 2006) — not only because she was on our Board of Advisors until her death in 2006, but because her activism and ideas were so firmly rooted in the Village, and so many of the seminal preservation battles she fought were here. We continue to strive to fulfill the ideals she set out more than a half century ago.

One particular way in which we do so is to fight for expanded landmark protections for the Village.  On October 31, 1963, Jane Jacobs urged the newly-established Landmarks Preservation Commission to landmark all of Greenwich Village, all the way to the Hudson River waterfront.  They did not quite go that far when they designated the Greenwich Village Historic District in 1969, in fact leaving out all the waterfront blocks Jane argued should be included.

To make her case for landmark designation, Jane cited ten particular buildings in her memo to the Landmarks Preservation Commission which she said exemplified the historic qualities worthy of preservation in this area.

In recently reviewing this letter from Jane as part of the 100th anniversary celebration, I was thrilled to discover that in the intervening years, we have been able to get nine of the ten buildings Jane called out landmarked or included in historic districts.

You can read a partial transcript of Jane Jacobs’ letter to the Landmarks Preservation Commission here.  The buildings she cited to argue for the historic significance of this area are:

Olhef’s Marina Works, 177 Christopher Street.  This 1884 former manufactory and workshop was landmarked in 2006 as part of the Weehawken Historic District.  The LPC actually originally did not include this building in the proposed Weehawken Street Historic District, but GVSHP and the Greenwich Village Community Task Force advocated strongly for it, and the LPC eventually added it to the proposed district.

398 West Street.  This 1830 Federal house with original sloped roof and dormers was built as a home for Isaac Amerman with a shop occupying the ground floor.  It was also landmarked in 2006 as part of the Weehawken Historic District.

159 Charles Street.  This 1838 Greek Revival house was built for Henry Wyckoff.  It was designated an individual NYC landmark in 2007.

305 West 10th Street (aka 396-397 West Street).  Formerly the Holland Hotel, this temporary residence for sailors and seamen was built in 1904.  It was landmarked in 2006 as part of the Weehawken Historic District.

395 West Street.  This 1849-50 structure (originally two buildings) was constructed as multiple dwellings above stores.  It was also landmarked in 2006 as part of the Weehawken Historic District.

391 West Street.  This 1902 neo-Renaissance style tenement was also landmarked in 2006 as part of the Weehawken Historic District.

The only building Jacobs cites in her letter which has not been landmarked is 180 Christopher Street, at the southeast corner of West Street.  Though historic at the time of Jacobs’ letter in 1963, much of the historic integrity of this former maritime hotel was lost in the 1980’s when two stories were added and its façade significantly altered as part of a conversion to an AIDS hospice, which it continues to function as today.  Though not landmarked or included in an historic district, GVSHP was able to get the site downzoned in 2005, placing height limits on building here which would help ensure that the scale of the current structure remain intact.

One response to “Continuing the Work of Jane Jacobs”