Note: This is an updated version of a post originally by Karen Loew 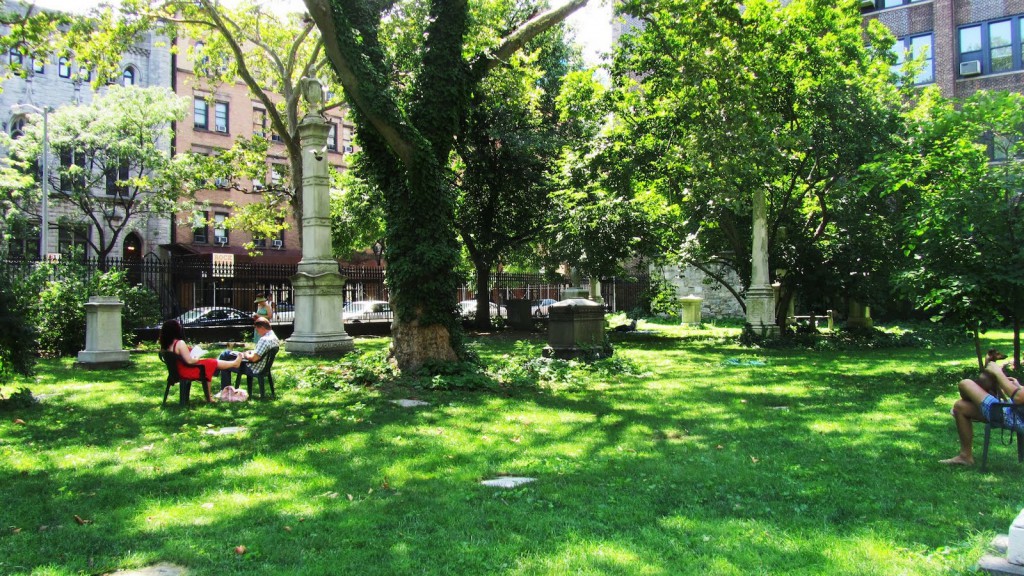 Do the tall arches of the sturdy red-brick Anthology Film Archives reassure you? Does the stillness of the New York City Marble Cemetery give you a thrill? Perhaps passing exuberant 101 Avenue A, the Pyramid Club, puts a bounce in your step?

Well, there’s good news:  these unique features of the East Village aren’t going anywhere. They are included in the East Village/Lower East Side Historic District, meaning that not only are they protected, but any new development that occurs within the district is regulated to complement the existing sense of place. (Even if a building or property has already been designated an Individual Landmark, as the NYC Marble Cemetery was in 1969, being in a historic district is a benefit because it promises to keep the nearby development contextual.)  And in fact it was five years ago today that GVSHP and allied community and preservation groups began the successful effort to get the Landmarks Preservation Commission to include these sites in the then-under-consideration historic district.

The district sprawls along lower Second Avenue, and then over between First Avenue and Avenue A, in a shape that (like its neighborhood) defies description. You have to see it:

The potential district was being researched by the New York City Landmarks Preservation Commission during 2011. Here at GVSHP, we were delighted that a healthy slice of the distinctive tenements, row houses, houses of worship, and more, of our neighborhood were being considered for historic district designation by the LPC. (Take a photo tour of some of these special buildings here.) But we thought several adjacent parcels should be included too, and worked closely with three other groups – Historic Districts Council, East Village Community Coalition, and the Lower East Side Preservation Initiative – to advocate that areas including Anthology, the NYC Marble Cemetery, and 101 Avenue A be included. (GVSHP had been advocating since 2007 to landmark 101 Avenue A.)

After considerable lobbying by the coalition, the LPC informed us in May 2011 that these properties would be included in deliberations (though sadly, other adjacent areas that we advocated for did not).  And when the East Village/Lower East Side Historic District became official a year and a half later, these sites which we pushed to be added into the proposed district were in fact designated.

Of course at the Greenwich Village Society for Historic Preservation, we’re historically minded. ‘Off the Grid’ has been marking a lot of anniversaries recently. And why not? Amid the buzz of everyday stresses, it’s worthwhile to pause at the gates of the cemetery, for example, to be grateful that this peaceful spot exists. Anniversaries, and landmarks, are the exhilarating points where we feel past and present combine.

Because of the extensions of the East Village/Lower East Side Historic District, we know that the 1919 New Essex Market Courthouse, which became the Millennium Film Workshop in 1967, which has now been the Anthology Film Archives for 35 years running, isn’t going anywhere.

And that the green-and-white stillness of the New York City Marble Cemetery, which since 1831 has been nothing but a cemetery, blessedly, will remain through its bicentennial and beyond.