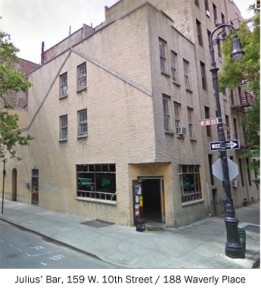 Ceremony. Click here for more information about the event and to RSVP. Read about other awardees here.

Julius’ Bar at 159 West 10th Street/188 Waverley Place is a Village institution. Established nearly a century ago, Julius’ (and the building in which it operates) boasts a storied past that is treasured and trumpeted by bar owner Helen Buford and Julius’ historian Tom Bernadin.

Julius’ is perhaps best known for its place in the history of LGBT rights, but the building’s history stretches much further back. Built in 1826, the building’s storefront originally housed a dry goods business. But by 1864, a bar had taken over the space. Libations have been served there ever since, making the site one of New York City’s oldest bars in continuous operation.

By the 1920s, it bore the Julius’ name. The bar weathered the prohibition storm by operating as a speakeasy, and was a favorite of bohemian Villagers. By the 1950s, it had become a popular spot for gay men. And it is in this era that Julius’ becomes legendary.

On April 21, 1966, three activists from the Mattachine Society, an early gay rights organization, walked up to the bar and declared themselves as gay men. Their aim? To challenge rules which at the time threatened to shutter any business serving gay patrons. The law was predicated on the idea that a gay presence in an establishment caused an immediately debaucherous or unsavory environment. The three activists were denied a drink, but not before the entire affair was caught on film by Fred W. McDarrah of the Village Voice. The ensuing publicity brought attention to the cause. The “Sip-In,” as it was soon called, came to symbolize the growing campaign for LGBT rights and led to a successful challenge of the rules.

Today, Julius’ owner Helen Buford is proud and protective of the history of her bar. And longtime Village resident Tom Bernadin holds the unusual (and very charming) title of official Julius’ historian. The bar continues to celebrate this and all aspects of its history, with events including a monthly Mattachine party hosted by John Cameron Mitchell, and charitable support for organizations including the American Red Cross, AIDS Walk NY, Bailey House, and St. Jude’s Children’s Research Hospital.

Among an ever-changing landscape of new fads and shiny development, this Village mainstay is thriving. The historic wood-paneled walls of Julius’ bear the mark of its long life, and patrons still flock there to sit on original wood-barrel stools while enjoying a drink and a hamburger, grilled up right in the bar.

On the 50th anniversary of the Sip-In, GVSHP is thrilled to honor Julius’ at this year’s Village Awards. Please join us, Helen, and Tom on June 14th to celebrate this city and civil rights landmark! Click here to RSVP.