For twenty one years, Chess Forum has been located in the heart of the “Chess District” of New York City and the world, in our very own South Village.  Owner  Imad Khachchan was an NYU PhD student in comparative religion in the 1990’s when he was swept up into the world of chess. Enamored of the bohemian and cultural richness of the neighborhood, he felt that unique character was not complete without its chess scene.  As Imad said, Bob Dylan was on MacDougal Street, Bobby Fisher was in Washington Square Park, and Chess Forum is still on Thompson Street.  And they are our October Business of the Month. 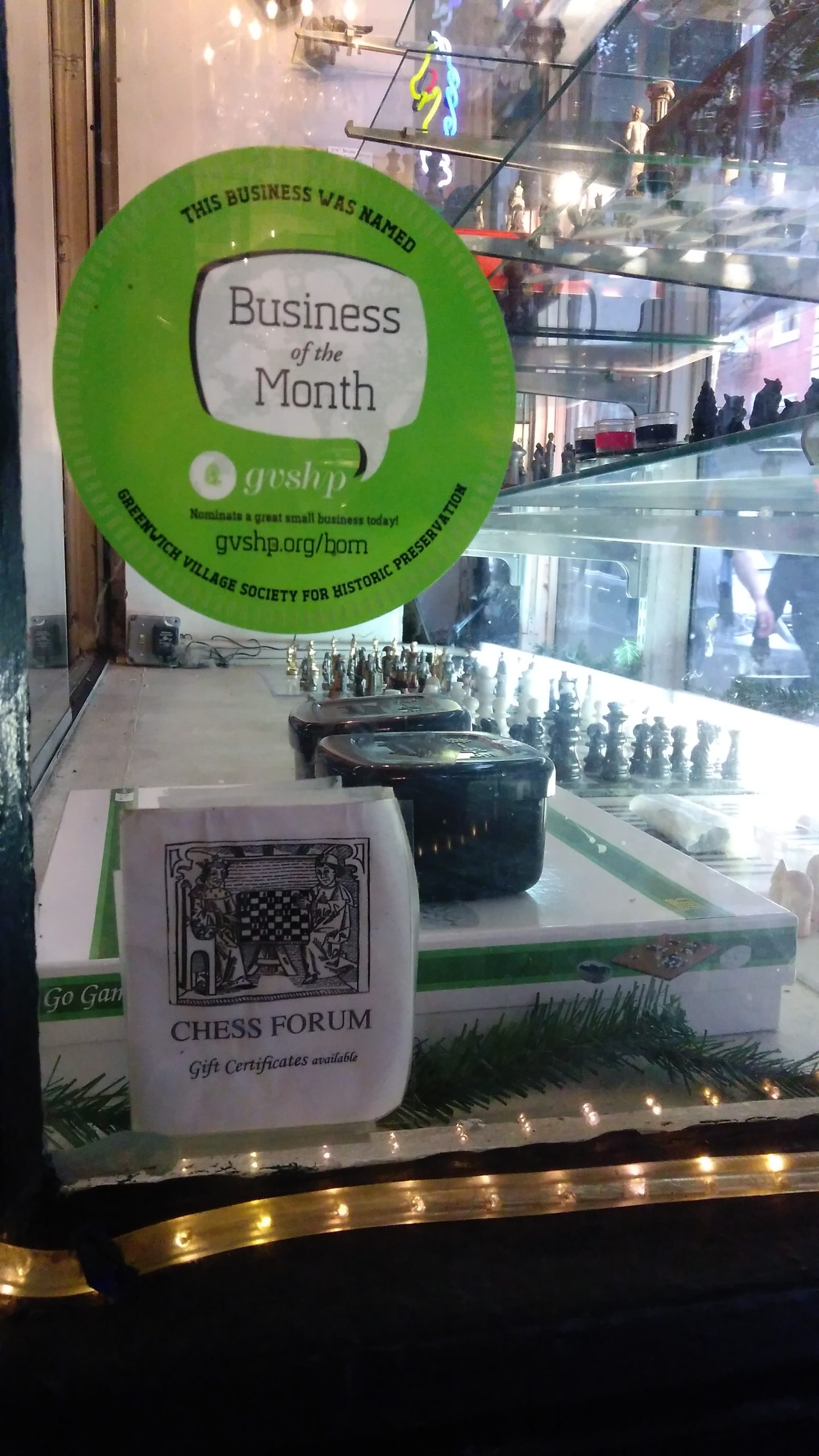 In Imad’s view, chess has two sides, an aesthetic one and a practical one. Beautiful boards and sets from across the world, many hand crafted, reside behind old school glass cabinets in Chess Forum, like valuables in a gallery.  And a dozen plus tables are set for anyone to walk in and play.  Sets for sale range in price from $10 to $10,000.

In Imad’s view, Chess is the great equalizer of people from all races and classes, creating a common language which cuts across multiple boundaries. Imad recounted the well-dressed and highly educated doctor who would come in wearing his Harvard logo sweater, and lose repeatedly to a homeless man who was a regular at Chess Forum and a chess master.

Although internet chess has had a significant impact on the need for and appeal of such a shop and location, Chess Forum was still lively one recent weekday afternoon.  It is only $5 an hour to play, and soak in the ambiance, which can be both fiercely competitive and joyfully fun.  Backgammon also draws a combination of mavens and those just looking to have fun.

The shop has a diverse array of customers, which Imad breaks into three main categories: seniors, children, and at night, couples (they are open till midnight).  In the shop’s heydays, it always had a full house, and even at midnight on a summer night, you often could not get a chess table even at nearby at Washington Square Park. Naturally, when the weather gets colder, more people come indoors to play; the busiest time of year for Chess Forum is November to April.

On a recent visit, Imad was taking calls from customers and estate inheritors seeking appraisals on recently-acquired chess sets — another service he provides.  Imad considers himself a ‘last man standing’ of sorts, “to stop the barbarians of capital” from taking over the city.  He refers to a pernicious trend of chain stores on every block as the Bostonization of NYC.  For him, it’s important that Chess Forum remain both a destination and a place people are inspired to explore when passing by.

But it takes time to build a trusted business.  “You can have millions for marketing, but a place is where your feet take you by themselves,” says Imad. The few feet of the cozy shop is shaped like an “L”, the way a knight moves. You’ll find sets of the type crafted at chess’ inception to pieces crafted like works of art of the modern era . Imad is of the opinion that although they do not have the same chess culture as other parts of the world, the best designs come from Italy.

One fine day Yael  walked in with her teenage son Aaron. She wanted to make sure he had lessons to foster his critical thinking skills.  They were in awe.  She said “If you have a passion to play you have to see this place. You feel smarter just walking into it.” She likened her impression of the sanctity of the Chess Forum as similar to that of the Muslim Quarter of the old city of Jerusalem, where Christians and Jews and Muslims had lived together for centuries.

In the shop was also Abderrahim from Morocco, a renowned teacher of young people in the city. “Chess is gym for children to sharpen their minds.” He showed me a video of him playing Magnus Carlsen in the park.  Carlsen will be in town in November for the Work Chess Championships at Historic South Street Seaport.

Many a luminary has entered the Chess Forum, stars like Julia Roberts and David Lee Roth, who was just “Dave” when at the tables.   Kevin Kline was there as he prepped for the French-German film “Queen to Play”.  When Imad went downstairs to get a special set for Oliver Stone, he returned to find the energetic director helping customers–Chess Forum is an egalitarian and relaxed atmosphere you do not find in many other places anymore.

Michael, a regular there, who is planning a trek to Patagonia, rightfully called it “the only place of its kind in all of NYC”.  He learned how to play from his stepfather who engaged in correspondence games at the time. He said mom and pop (and pop and pop and mom and mom) stores are going the way of the buffalo and the dinosaur.

But Chess Forum remains holding its position, so go check it out.

Stay tuned for a special Program at the Chess Forum on November 10th on the eve of the World Chess Championship by checking our Events page.

More photos of Chess Forum here, (with a video of the Drunken Chess Pieces).

What special small business would you like to see featured next? Just click here to fill out a brief form. Thank you!

8 responses to “Business of the Month: Chess Forum, 219 Thompson Street”