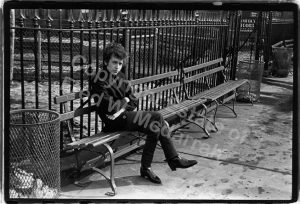 The South Village in the ‘60s was a hotbed of creativity and activism. Where the West Village might be known as the heart of the neighborhood, the area south could be called its soul. Sullivan Street, Thompson Street, MacDougal Street, Washington Square, the surrounding areas were the epicenter of the creative intelligentsia at that time. The streets teemed with coffee houses that overflowed with activists and artists alike. The music venues were abundant and bursting with new and inspired genres of sound.

Dylan and his contemporaries were born of this fertile ground of creativity. Heading east and away from a very conventional, conservative background in Minnesota, Dylan arrived in the New York in January 1961 on a very cold winter’s day. Dylan was later to perfectly capture the zeitgeist of the moment in a prose poem he wrote for the album jacket of the Peter, Paul and Mary In the Wind LP:

Everybody that hung out at the Gaslight was close-
Yuh had t be-
In order t keep from going insane an in order t
survive-
An it can’t be denied-
It was a hangout-
But not like the street corner-
Down there we weren’t standin lookin out at the world
Watchin girls-an findin out how they walk-
We was lookin at each other….and findin out about
ourselves-

Gerde’s Folk City, no longer in existence today, was located at 11 West 4th Street and was the spot of Dylan’s first paid gig in the city. Formerly a sleepy saloon, Folk City became a thriving cabaret space during the folk revolution. Dylan, Baez, Dave Van Ronk, Jack Elliot, along with Woody Guthrie and all the great poets and musicians of the day oscillated between Gerde’s, the Gaslight Café, the Commons, the Folklore Center, the Kettle of Fish, and the Whitehorse Tavern by night and Café Borgia, Café Cino, and Caffe Reggio, the first coffeehouse in the Village and the owner of the very first espresso machine, by day.

The estate of Fred W. McDarrah,the photographer of all the photos in this post of Dylan’s Village, has graciously offered prints of the photographs.  All proceeds from the sales of the prints go directly to Greenwich Village Society for Historic Preservation.   To purchase the prints, please click here.