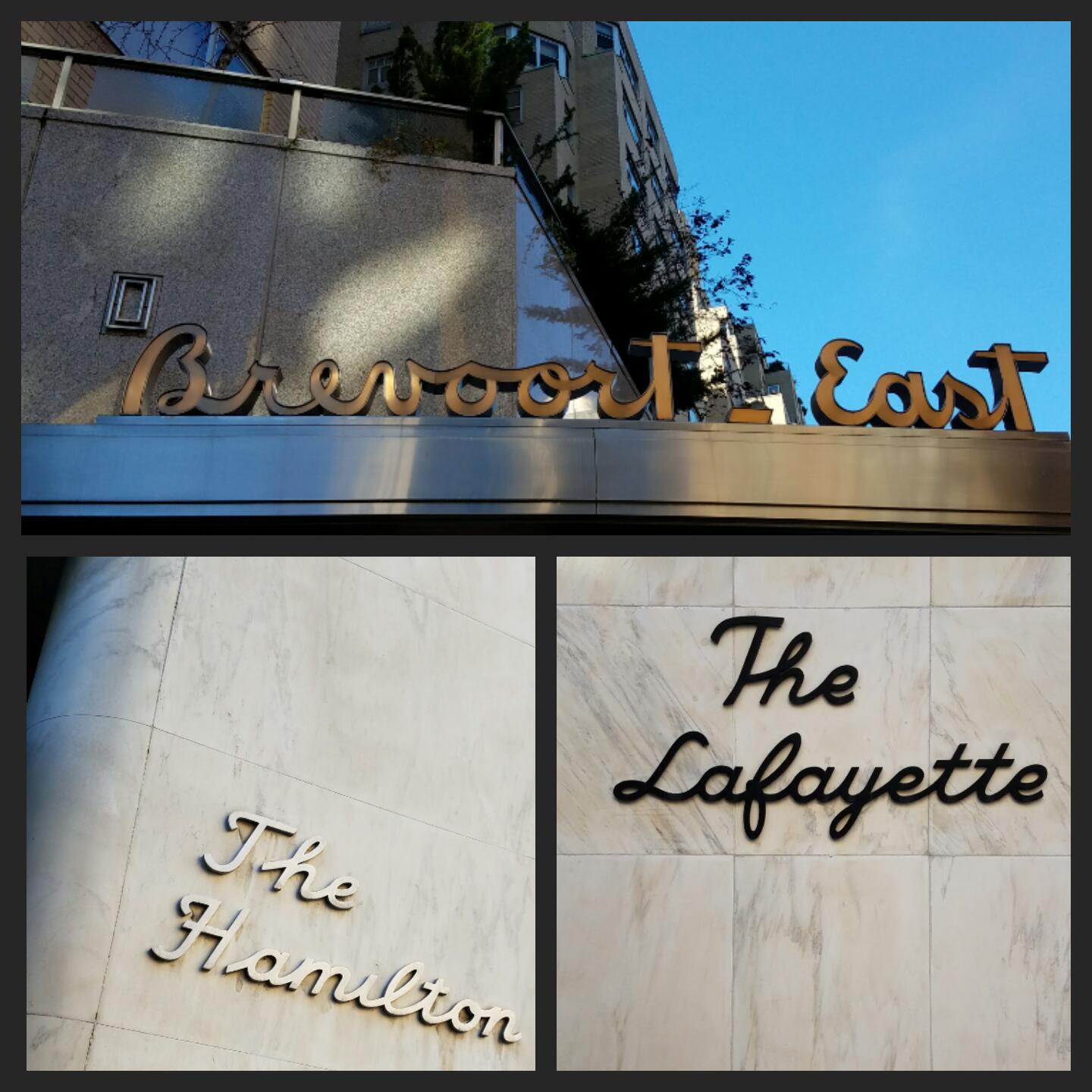 One of my favorite two-block sections in Greenwich Village may be an unlikely one – East 9th Street between Broadway and 5th Avenue. It’s not the oldest strip in the neighborhood, or the one with the best shops. In fact, it’s home to a rather uniform group of mid-century apartment houses, with almost no ground-floor retail to contribute to the atmosphere on the street. But that’s actually why I like it. Although much newer than the historic fabric we’re often considering in the Village, this too is a miniature time capsule. Randall House, The Hamilton, The Lafayette, Brevoort East…all these grand apartment buildings are located together in just two blocks. The buildings speak to an architectural trend of mid-century modern design, and feature some fabulous detailing that you certainly no longer see in contemporary construction. It made me curious – what was happening in the city at this time to so completely transform a block?

A little research shows that at least four of these complexes were built within two years – 1954 and 1955. Can you imagine? I know many of us feel like there is constantly scaffolding up and construction blocking our sidewalks, but it’s hard to fathom development at that scale taking place on so many lots, so close to each other, and in such quick succession. Of course this wouldn’t have been the first time that large-scale buildings were constructed on those blocks – 29, 35, and 45 East 9th Street, covering almost the entire north side of that block, were built in together in 1925. But post-war buildings like the Hamilton and Brevoort are a different scale and design entirely.

So were there any special circumstances that led to this boom in large-scale building? Yes, and no. A bit earlier than the mid-century, “young marrieds” as they were often referred to in the press, began to make the Village their home. This was a different set than the bohemians – a bit akin, perhaps, to what we might consider a “yuppie” today. They liked the cozy, less formal, atmosphere of the Village, but they were by no means radicals. They kept nice, tidy homes; they enjoyed art but probably didn’t make it. These residents, whether they meant to or not, changed the atmosphere – as well as the public perception – of the Village. As its reputation as a radical bohemian enclave began to wane, many people saw the Village as the hip, new neighborhood. But the housing stock was considered out of date, shabby, and even blighted. So developers targeted the area for modernization. This is a tale as old as time – one group of residents make a neighborhood desirable, and another group changes the game, demanding something of their new neighborhood that didn’t (yet) exist.

The first major development of this kind was announced in December 1944, when a nineteen-story apartment house was planned for the northwest corner of Washington Square North and Fifth Avenue. Replacing a half-block of Greek Revival townhouses, the massive plan mobilized Villagers. This new generation of Villagers were perhaps more engaged with everyday civic affairs than their bohemian forebears, and they were prepared to make their voices heard. In an unlikely turn, they found an advocate in Robert Moses, who drafted a zoning amendment that would replace double-height allowances for park-side property with a more modest allowance of about seven or eight stories. In the end, despite many ups and downs, a development was built there – we know it today as 2 Fifth Avenue. But compromises were forced on the developer, and the result, while maybe not inspiring, was thought to be successful in maintaining a modicum of scale on the Washington Square North side of the site.

Despite the hurdles in getting 2 Fifth Avenue built, it opened the flood gates. But the multiple, near-simultaneous developments on this stretch of East 9th Street is somewhat unique in the Village’s history. The original owner had willed that the land be used for the housing and rehabilitation of sailors, and the organization Sailors’ Snug Harbor was born. But utimately the group built sailors’ housing on Staten Island, and divided their valuable Greenwich Village holdings into 253 lots. So there was a lot of land up for grabs in this area, all being leased to separate developers, and all by one entity. By early 1950 another project was targeted for Sailors’ Snug Harbor land, and soon many large-scale developments were in contract with the organization – catering to a new Villagers who, while charmed by the quaint cityscape of the neighborhood, weren’t necessarily interested in living so quaintly themselves.

The Hamilton (60 East 9th) was built by H.I. Feldman in 1954, followed by Feldman’s The Lafayette (at 30 East 9th) in 1955. Much like developments today, the names of the apartment houses tended to reflect, often in name only, the history of the site. The Lafayette was so named because it replaced the out-of-fashion Lafayette Hotel, which was home to a cafe beloved by older Villagers. Also demolished in the name of mid-century progress was the Brevoort Hotel. Standing on long-owned land of the Brevoort family, the hotel was a famed Village mainstay with its own beloved cafe frequented by artists and bohemians. (Off the Grid has discussed both these hotels in previous posts.)

Longtime Villagers were shocked by the swift changes brought on by these developments, but many New Yorkers saw the change as refreshing. To many, Greenwich Village was shabby, sleepy, and behind the times. (And I must say, Cafe Brevoort is looking a tad shabby in that photo…) What better way to usher in a new American era than by building big, tall, and modern? While we could debate about the pros and cons of this breakneck growth, I love some of these buildings now. The thing that first interested me in the stretch of East 9th Street is the bounty of mid-century design signage. These letters make it a real treat to walk this corridor that, due to its homogeneity and lack of storefronts, might otherwise be a bit boring. And now that over fifty years have passed, perhaps these buildings have aged a bit better than many were expecting. They are certainly of their time, and while they’re wildly different from what they replaced, they now signify an important moment in the neighborhood’s history. And that’s exactly why it’s so essential to advocate for sensible development and variety of building types. The evidence of time, progress, and new styles can add to the richness of a historic neighborhood. If done right, the new buildings become relics themselves one day, and offer new things to teach us about how a neighborhood grows, how it’s used, and by whom. 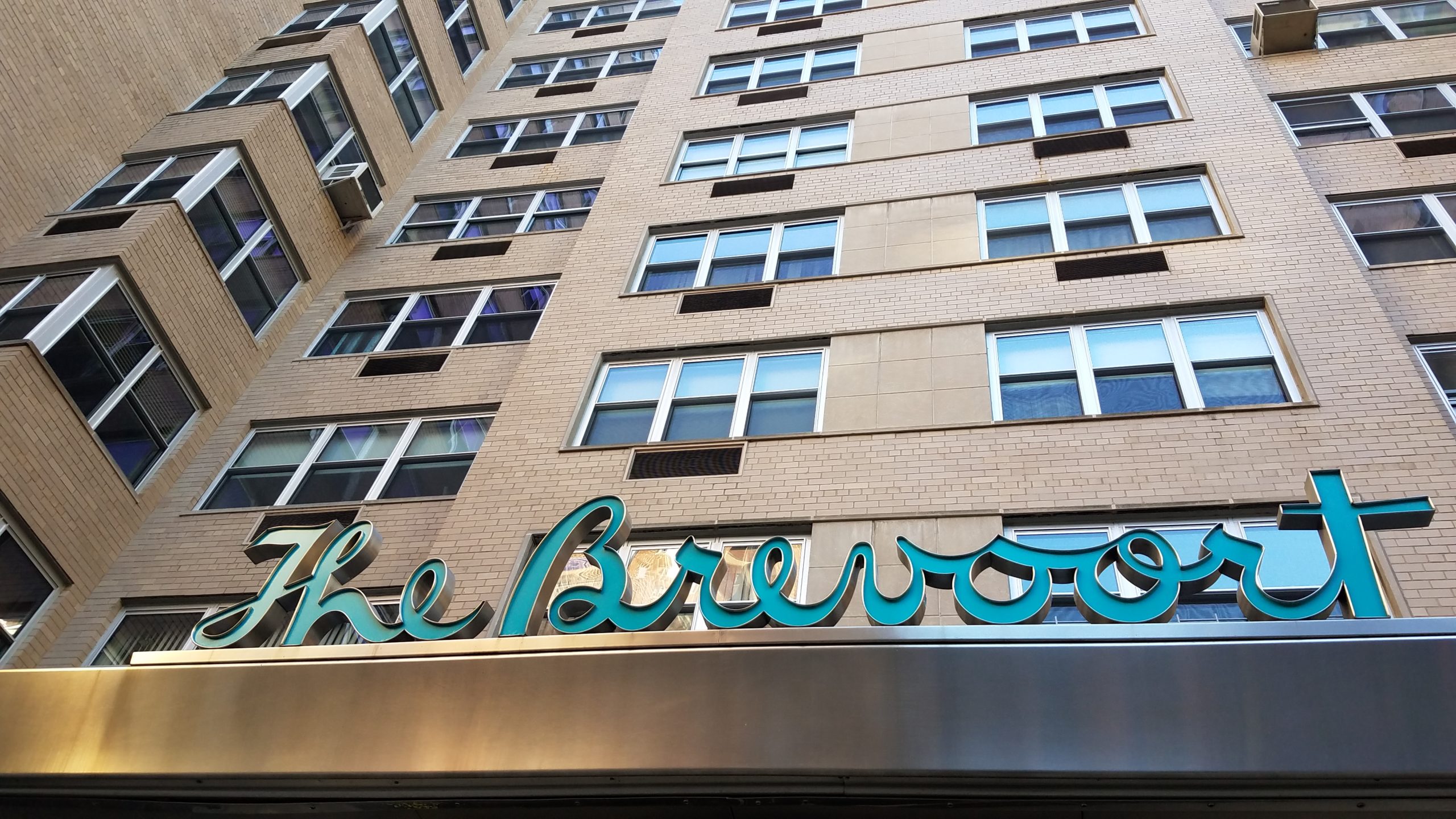 Take a stroll through the Sailors’ Snug Harbor area soon and see if you aren’t a bit charmed by the mid-century grandeur. If you can’t resist snapping a few pictures (I know I couldn’t), tag them #gvshp so we can all enjoy!