Jean-Michel Basquiat, born December 22, 1960, may have lived just 27 short years. But in that time he created a language of art which may resonate more than ever today, and became in many ways the quintessential late 20th century downtown artist. 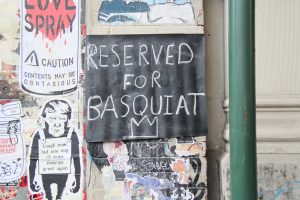 Jean-Michel Basquiat’s life and work are synonymous with the East Village/NoHo art scene of the 1980’s. From his early years as a burgeoning young artist while studying at City-as-School, a progressive West Village high school which operates on the principles of John Dewey’s theory that students learn by doing, Basquiat was steeped in downtown culture. 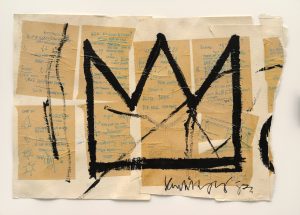 His first true hang out was Washington Square Park. There he met Al Diaz, a graffiti artist and fellow student at City-as-School. Through his work with a theatre group called Family Life Theatre, Basquiat created a fictional character he called SAMO (Same Old Sh**) who makes a living selling fake religion. Basquiat and Diaz started collaborating on the SAMO project.

They began spray painting aphorisms and graffiti with the SAMO tag on the D train line and all around Lower Manhattan.

After a falling out with Diaz, Basquiat b 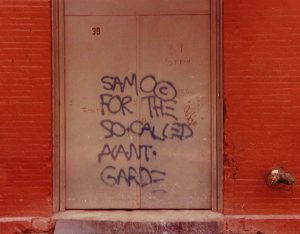 egan to create paintings on t-shirts, postcards, drawings, and collages, selling them in Washington Square.

In the fall of 1978, Basquiat met fellow downtown artists and scene-makers Keith Haring and Kenny Scharf, both major players in the emerging East Village art scene. They were to remain an integral part of Basquiat’s life and work.

The artists of the downtown scene were reacting to the tumultuous political times of the 1970’s: the Watergate scandal, Nixon’s resignation, and the Vietnam War. The political climate, coupled with the deep recession of the mid-to-late 70’s that included high unemployment and runaway inflation, found New York facing a looming bankruptcy. Downtown lofts were plentiful and cheap, but the neighborhood was known for negligent landlords and dangerous streets. This unstable environment created a need for artists to form a community, which was fertile ground for expression for Basquiat and the new breed of artists.

For those artists living and working downtown, the doors of the establishment art world and institutions were closed. The artists looked to their own environment and community for fodder for their developing aesthetic and growing concerns. While the elite art world was out of their reach, it was also the standard which they eschewed and pushed against. Emerging from the staid milieu, the downtown punk rebellion took hold. Music, art, film, and fashion defied conventional standards. They took risks and broke rules. Neo-expressionism, figuration, and punk rock were among the artistic movements that germinated in the East Village in the 80’s.

In June of 1980, Basquiat’s art was publicly exhibited for the first time in the “Times Square Show,” a group exhibition held in a vacant building at 41st Street and Seventh Avenue. The show is often referenced as the groundbreaking exhibition that inaugurated new trends in contemporary art. Organized by Colab (Collaborative Projects Incorporated), an artist-run group based on the Lower East Side, and Fashion Moda, a graffiti-based alternative gallery space in the South Bronx, the conjunction of artists in the show represented two very distinct subcultures: the downtown avant-garde consisting of new wave and neo-pop, and the uptown avant-garde of rap and graffiti. Along with Basquiat, some of the other artists represented in the show were John Ahearn, Jane Dickson, Mike Glier, Mimi Gross, David Hammons, Jenny Holzer, Joe Lewis, Candace Hill-Montgomery, Tom Otterness, Lee Quinones, Kenny Scharf, Kiki Smith, and Robin Winters. The show was a critical success and was the first step toward legitimizing the artists of the East Village club scene.

Basquiat became a world famous star of the art world by the time he was 21. In August of 1983, Basquiat leased a space at 57 Great Jones Street from his friend and mentor, Andy Warhol.

We honored Baquiat by installing a plaque on his former studio located at 57 Great Jones Street. Several hundred Basquiat enthusiasts joined that day to recognize his contributions to the arts . Read more about the plaque here, and about our ongoing plaque program here. You can also learn more about Basquiat and other great African American and Latinx trailblazers on our Civil Rights and Social Justice Map.