It seems that President-elect Donald Trump is having a difficult time filling the roster for his inauguration ceremony. In previous years, the inauguration festivities have included extensive and star-studded ceremonies featuring speeches, musical performances, dance numbers, and dramatic readings. But this year, many artists have shown an unwillingness to participate, or have their work featured, in the January 20th proceedings, citing political and ideological differences.

One such performer is Rebecca Ferguson. Or, rather, Ferguson did agree to perform at the inauguration under one condition: that she be permitted to sing Billie Holiday’s 1939 protest song “Strange Fruit.” The song, originally written as a poem by Abel Meeropol in 1937, is a seering protest of American racism, state-sanctioned violence, and systemic indifference. The song quietly rages against the systems in place at the time that kept races divided and black Americans perpetually behind barriers and (sometimes literally) under the gun. And whether she knew it or not, when Rebecca Ferguson asked to sing that song in Washington, DC this month, she connected the current political climate straight to Greenwich Village and its longstanding history of progressive politics and social justice.

Billie Holiday sang “Strange Fruit” in public for the first time right on Sheridan Square – at a basement venue called Cafe Society. (Several history students at NYU wrote a great history of the cafe for Off the Grid just a year ago.) When owner Barney Josephson wanted to open a progressive nightclub, he knew he had to locate it somewhere his bold vision would be not only tolerated, but embraced. Greenwich Village was the obvious choice. When Cafe Society opened in 1938, it was the first racially integrated nightclub in the entire city. Villagers (and more genteel New Yorkers looking for some excitement) came to Cafe Society to mix and mingle among people who may be wildly different than they – but who all enjoyed a communal, collaborative atmosphere and topnotch musical performances.

A year after the cafe opened, Billie Holiday, who often performed there, delivered that famous first rendition of “Strange Fruit.” Her choice to perform this song was truly revolutionary, and she later said in her autobiography that, even among a progressive audience, she was nervous about the reaction. Protest songs, as a genre, did not exist yet and “Strange Fruit” is a doozy of a protest song. “There wasn’t even a patter of applause when I finished,” she wrote. “Then a lone person began to clap nervously. Then suddenly everybody was clapping.” It’s hard to imagine how striking this performance must have been to the Greenwich Village audience – much of the city (not to mention the country) did not even allow blacks and whites to be seated at the same table, let alone listening together to a song so boldly decrying the country’s legacy of racial injustice.

But unconventionality has always been the way in Greenwich Village, hasn’t it? A new map my colleagues have created certainly shows that to be the case. The map (GVSHP’s latest in a string of cool visual guides – like this one of Bob Dylan’s Greenwich Village) lists sites of civil rights and social justice in Greenwich Village, East Village, and NoHo and is organized into five categories—African-American history, LGBT history, women’s history, social justice and political activism, and Hispanic history. Some sites are even members of several categories, like the Lorraine Hansberry Residence, which figures into women’s, LGBT, and African-American history. 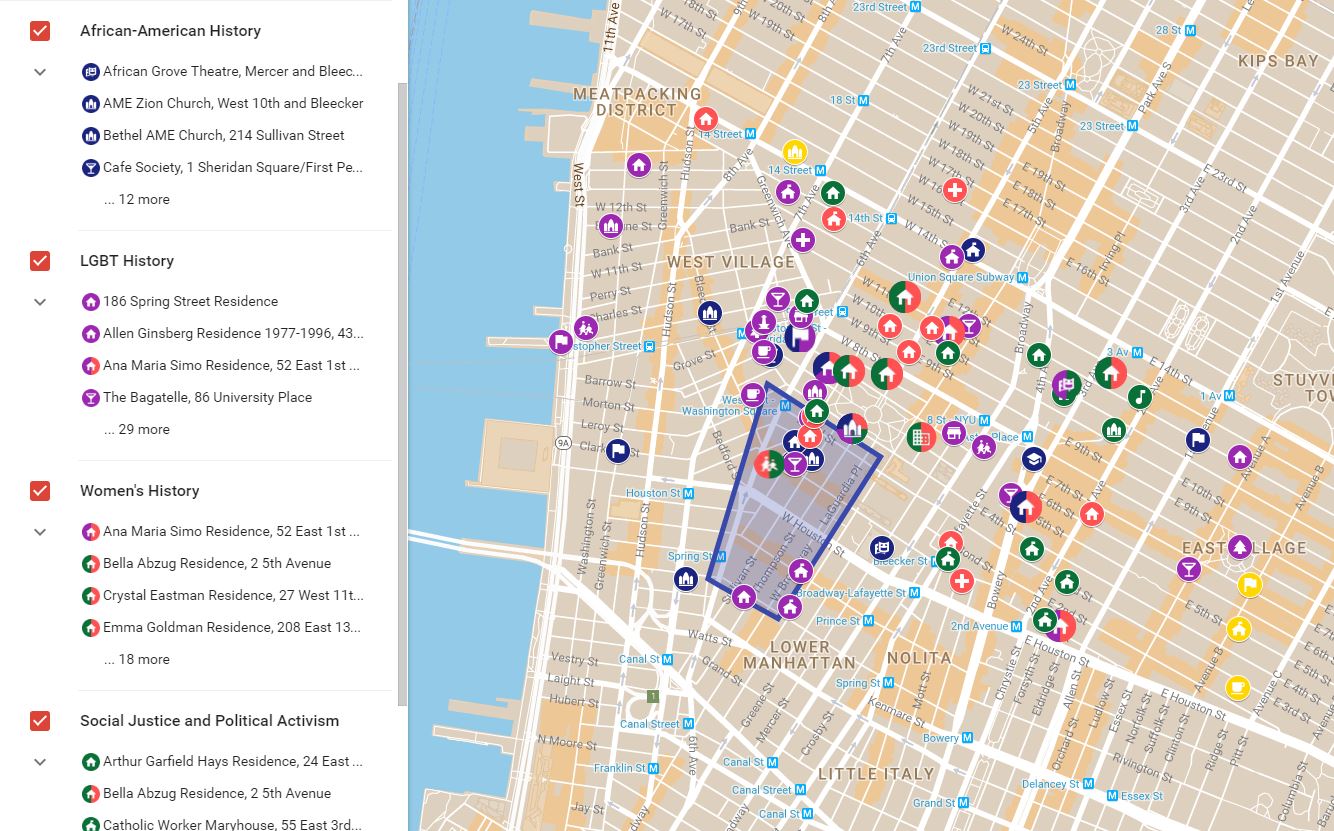 The map is a fantastic visual representation of the Village’s centuries-long commitment to progress, activism, and forward-thinking. These neighborhoods are living museums brimming with history that remains, as we can see, poignantly relevant to our lives today. Take a look at the map today and you’ll easily become immersed in the incredible significance of these historic sites. And just like history itself, we mean for this map to be dynamic and ever-changing – so if you have a piece of civil rights or social justice history that you’d like to see included, let us know! GVSHP intends for this map to be all-inclusive, and like most things worth our time, it’ll take cooperation and collaboration to get there.

One response to “Dissent and “Strange Fruit” in the Village”