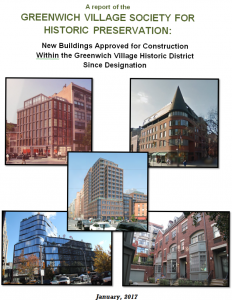 Greenwich Village Historic District New Buildings Report for the first time catalogues every new building approved by the Landmarks Preservation Commission (LPC) in the Greenwich Village Historic District, our city’s largest and one of its oldest historic districts.  That’s got us thinking a lot about this set of buildings, and what we can learn from them.

126 Waverly Place is one of the most thought-provoking among them. Built in 1984-85 and designed by Polshek and Partners, it spans the east side of Sixth Avenue between Washington Place and Waverly Place.  In light of some more recent new building proposals (and here) within the Greenwich Village Historic District, it seems hard to believe that this design was the center of a major controversy, not just within Greenwich Village but also within the New York City preservation community.  However, that was in fact the case and the issues and debate it inspired still resonate today.

Before we get to the story of 126 Waverly, here is a little background on the site itself.  In 1984, the site was a parking lot.  How was a prime location like this devoid of development?  Prior to 1930, the 19th-century buildings which had been at this location were razed, along with sites north and south along Sixth Avenue in order to accommodate the soon-to-be-extended Sixth Avenue subway line.  And while other attempts were made to develop this site prior to 1984, including a Loews Theater in 1981, it was still empty in 1984.

In the spring of 1984, James Stewart Polshek, architect for the project and then Dean of Columbia University’s Graduate School of Architecture and Planning, presented his plan for 126 Waverly Place to Community Board 2.  Polshek presented a plan for a multi-use building consisting of a maximum of 10 ground floor shops and residential condominiums in the upper stories.  It was designed to take up the entire site with five stories on each of the side streets, six on Sixth Avenue and a central courtyard.  Exterior materials proposed included red brick, green tile, limestone and terracotta.  According to Polshek at the time, who was a Village resident at 32 Washington Square West, “We looked at old Village houses and tried to be as sensitive as possible to the context of the Village.  That context is variety, scale, surprise and delight.”  He stated in The New York Times, “new buildings must reflect the future as well as the past.”

Reactions to the proposal varied and passions ran high as, according to The Villager at the time, “the development of this site was projected to have crucial bearing on future development, residential as well as commercial, in the Village.”  The local paper went on to say, “At stake was an opportunity to set a precedent, to answer the perennial question, ‘What do you build in a historic district?’ which has been posed in the Village since it was legally landmarked…”  At both the CB2 Landmarks Committee meeting and the Full Board meeting, comments included:

“I respect the architect.  He’s considered every aspect of the plan.  This is not a slapdash attempt to satisfy this Committee or the Landmarks Commission.”

“I hate it.  Its not in keeping with the district; it’s plain ugly and perpetuates the monstrosities that have already been inflicted on us.”

“an idiosyncratic building that could look very strange for a long time.”

An organization called the Village Coalition, representing five block groups, started a letter writing campaign with the intent to persuade the Landmarks Preservation Commission (LPC) not to grant final approval to the project. By the time it came before the LPC in August of 1984, comments from critics included:

“No cornice? That’s like going to the Easter Parade without an Easter bonnet.”

“a failure in that it is not contextual”

“On the whole, it is a good use of space”

“The building isn’t a startling example of great architecture but it isn’t bad.”

“There are certain details that could be rearranged.”

In the end, the design was approved by the LPC with some changes to the details.  This controversy did not escape the notice of the preservation community.  As written by architectural conservator Gregory Dreicer in an editorial in The New York Times: “James Stewart Polshek’s design for a new building in Greenwich Village reached, in comparison with the work of most architects today, the acme of architectural sensitivity to context.  Clearly, here is a special effort to avoid the standard modern brick box.  To require him to add a cornice to his facade goes beyond nostalgia and stumbles into the ridiculous.”

Paul Goldberger, architectural critic for The New York Times, wrote in September of 1984 of the controversy:

The issue is not really Mr. Polshek’s builidng or even Greenwich Village.  The question is whether underneath all of this enthusiasm for a coherent physical environment, behind all of the preservationist zeal that motivates so many people today, there is not some confusion over just who should be designing buildings and what the whole point of having a historic district is.

The Landmarks Commission is given no more specific a mandate for determining whether architecture within a historic district is right or wrong than whether or not it is ”appropriate.” And while few would argue the extremes – that a glass skyscraper is not appropriate to Greenwich Village, and a reproduction of a Greek Revival townhouse is – there is almost no consensus at all about the great sweep of architecture that falls in the middle.

And that is where most new architecture belongs, and will continue to belong. The modernist abstraction that ignores its surroundings is largely a creature of the past, and properly so; there is an increasing sympathy on the part of both architects and the public toward new architecture that tries to relate in some way to its physical context, and often toward architecture that loosely embraces certain aspects of historic style.

Mr. Polshek’s building, which is a six-story structure of brick, with a limestone base containing storefronts and a stucco-fronted penthouse, does this…The design as it now stands is…vastly better than most new architecture in New York. The design does show respect for the scale and character of the particular part of Greenwich Village in which it is to be set. That is the active, eclectic commercial-residential mix of the Avenue of the Americas, something quite different from the more homogeneous and delicate Greek Revival streetscape of blocks like West 11th Street.

This design is, in other words, ”appropriate” by any reasonable definition.

Thirty years later, the building is an integral and seemingly inextricable part of the Greenwich Village landscape. While no doubt opinions may still vary on the building, it is considered by many a model of thoughtful, contextual architecture that respects and draws from historic styles without merely mimicking or imitating them.  One might call it a modern classic.