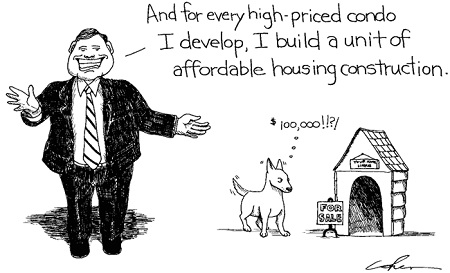 “Alternative facts” seems to be the buzzword this week, and may become the phrase of the next four years.

For better or worse, for those of us involved in the fight for preservation and against overdevelopment, tackling the concept of “alternative facts” — assertions by someone in authority that seems to have no basis in reality, though that does not seem to matter to them — is nothing new to us.  So in light of the recent prominence of this mystifying concept, we thought we’d share with our readers some of our favorite “alternative facts” we’ve had to take on in recent years. 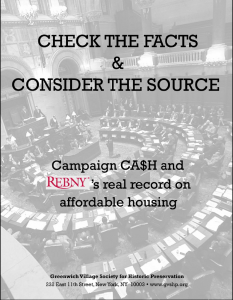 For years the Real Estate Board of New York (REBNY) has tried to find a link between landmarking and gentrification in New York City.  Their claim is that by easing up on landmarking, it would increase development, allowing new housing to be built and address the demand for it (i.e. supply side/trickle down economics).  However, a report released by NYU Furman Center looking at gentrification in NYC between 1990 and 2014 provided evidence that undermined these claims.  The report pointed out that many areas of the city without landmark protections that experienced the greatest volume of new construction also saw the largest decreases in affordability (Williamsburg/Greenpoint being a prime example).  The same report showed that many landmarked areas of the city saw the greatest retention of their affordability.  In a blog post from last year, GVSHP Executive Director Andrew Berman summed it up this way:

“We would be the first to say that correlation is not causation, and one should view these statistics in their appropriate context.  But one thing these statistics do clearly show is that there is no obvious connection between landmark designated areas of New York City and increasing unaffordability, at least as compared to non-landmarked areas.  And certainly they show that large amounts of new housing construction, even when that housing construction includes some affordable units, does not necessarily tend to make an area more affordable, and in fact frequently goes hand in hand with the steepest rises in housing prices — a case GVSHP has long argued.” 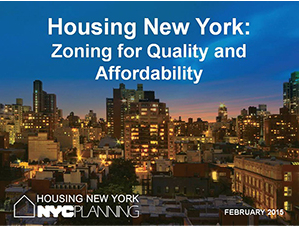 Alternative Fact: Raising high limits, as was proposed with the city’s Zoning for Quality and Affordability (ZQA), would help increase affordability.

Reality: ZQA would produce neither affordability nor quality.

One of ZQA’s biggest promises was that increasing height limits in inclusionary zones (not the city as a whole) would allow for the construction of new buildings with a fraction of their units set aside as affordable (think the 80/20 rule).  However, there were many flaws in the logic behind this claim.  To start, in the East Village about half of new developments built within inclusionary zones opted not to include affordable units, despite existing height limits allowing them ample room to do so (the Mayor claimed the impediment to more of these developers including the affordable units was that height limits prevented them from doing so).  Similarly, the Citizen’s Housing Planning Council and Department of City Planning’s reports and analysis claimed that current zoning didn’t allow the inclusion of affordable housing in these ‘inclusionary,’ 80/20 developments (where developers get to build slightly larger developments if they include 20% affordable units).  Yet their own data was skewed by the fact that the former only looked at 100% affordable buildings (not covered within the purview of ZQA), while the latter was conducted exclusively on narrow street, interior lot sites,  which are the most restricted in terms of how floor area can be used, making this hardly a representative cross-section.  These are only a few of the logical flaws in ZQA; for a more comprehensive discussion click here.

Alternative Fact: The owner of the former PS. 64/Charas/El Bohio Community Center in the East Village wants to revive the long-shuttered building by turning it into a dormitory.

Reality: A hostel is not a dormitory.

The former PS 64/Charas/El Bohio has been embroiled in controversy for two decades. Since its sale and closing in 1998, community members had advocated for years to have the building transformed into a community center. When the City sold the building to a developer, they placed a deed restriction upon it, which limits the building’s use to “community facilities” as defined by New York City zoning, which includes community and cultural centers, schools, and, less fortunately, dormitories (among many other uses).  The developer has been trying to get permits from the city to convert the building into a “dormitory” for Adelphi University.   But a closer look at the terms of the lease show that Adelphi would only be responsible for about 10% of the beds in the dormitory, while the developer owner would get to rent out the other 90% on a revolving door basis.  That’s not a dorm; that’s a youth hostel, and that’s not an allowable use under the deed restriction.

Currently, GVSHP is helping to coordinate meetings, rallies, and letter-writing campaigns to help stop this plan.