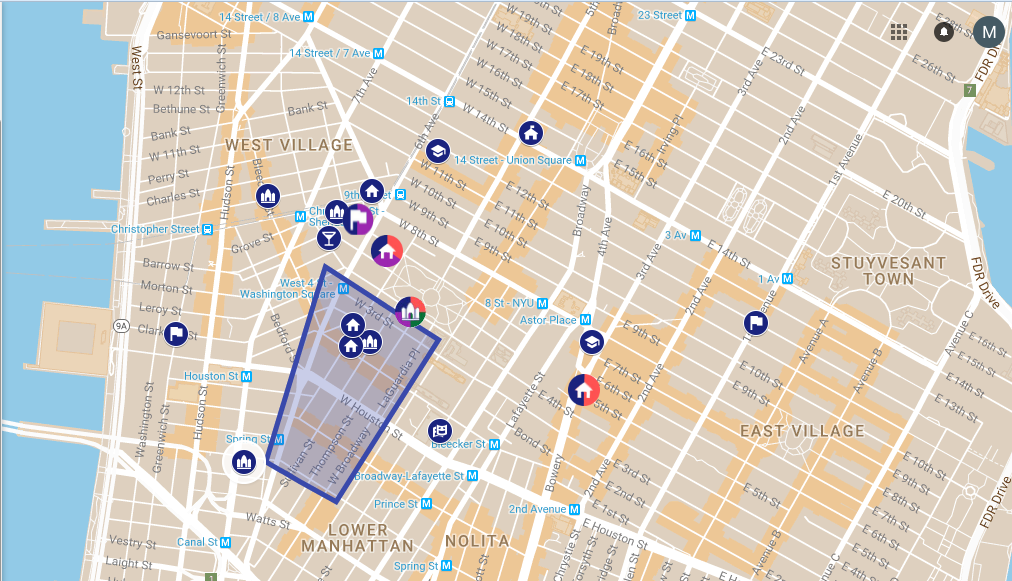 February is Black History Month.  We here at GVSHP are celebrating it by highlighting different sites and locations of significance to African-American history in the Village.  A great source for this is our recently-released Civil Rights & Social Justice Map.

Today, we discuss the Black churches in the Village that unfortunately are no longer with us, and one mixed-race abolitionist church:

The Abyssinian Baptist Church was located here at 166 Waverly Place and had a congregation dating back to 1808. The congregation formed when a handful of free blacks withdrew from the First Baptist Church in New York in protest against the practice of segregating blacks in what was called a “slave loft”. Some of the protesters were natives of Ethiopia, then known as Abyssinia. The founding of the church was an affirmation of their African heritage and proudly called attention to the antiquity of Christian traditions in Abyssinia. The congregation worshiped in several places in Lower Manhattan until 1856,  when the church bought the property at Waverly Place under the leadership of Reverend William Spellman. It soon gained a reputation as one of the richest black churches in the city. Despite some changes in leadership and disagreements over whether the church should be moved to Harlem, the congregation remained strong, and by 1900 claimed over one thousand members. Its choir was admired as one of the best in the city. The church also contributed to a number of charitable activities, including aid to its indigent members and contributions to city missions.  The two buildings which currently stand on the site, 160-162 and 164-166 Waverly Place, were built in 1905 and 1907, which was around the time many traces of Little Africa began to disappear from the area and African-Americans moved to the Tenderloin in the west 20’s and 30’s, San Juan Hill in the West 60’s, and eventually Harlem.

This is the former location of the AME Zion Church. Though it was replaced in the early 1900s by the pair of tenement buildings that occupy the site today (the historic rendering is from New York Public Library archives), it was once an important center of African American life in the Village. Interestingly, it was farther west than most histories place the majority of the black population at that time. When emancipation finally came to New York State on the Fourth of July 1827, it was a time of enormous hope for many African Americans in New York City. On that day, Reverend William Hamilton announced at the African Methodist Episcopal Zion Church, “[n]o more shall the accursed name of slave be attached to us — no more shall negro and slave be synonimous [sic]”. A New York Times article from 1870 details an inclusive celebration of the passage of the Fifteenth Amendment, which gave black men the right to vote, which took place at the church.

Though it was demolished more than a century ago, this is the former location of the Bethel African Methodist Episcopal Church (Bethel AME), the heart of a growing African American community in what was then referred to as “Little Africa”. Before becoming home to the Bethel AME, the site was purchased for the Associated Methodist Protestant Church in 1837, and then sold to the Sullivan Street Methodist Church in 1842. The Bethel AME Church purchased the church in 1862. It is noted on maps of the time as the “Colored Bethel” (1879) and the “African Methodist Church” (1887). In 1895, the church became home to the parish of Our Lady of Pompeii for a short time, which had moved there from Waverly Place. Today, the building at 214 Sullivan Street is a Renaissance Revival factory building that was built in 1899 for a paper box company.

Now the site (ironically enough) of the Trump SoHo, the Spring Street Presbyterian Church was founded in 1809 and the original building was completed in 1811. It was known for its strong abolitionist stance. The church had a multiracial Sunday school and admitted African-Americans to full communion. Their stance was met with backlash, however, and was burned down twice by the 1830s. In June of 1836, a new brick structure was opened on the site. The Presbytery closed the church in 1963 and in 1966 the building was destroyed by a fire. The site was excavated in 2006 in the process of being cleared for the new Trump SoHo condo hotel, and the church’s former cemetery was uncovered.