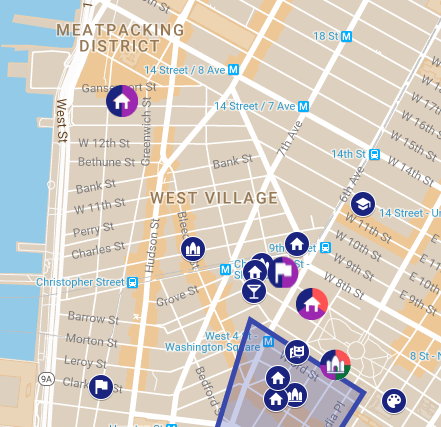 February is Black History Month.  We here at GVSHP are celebrating it by highlighting different sites of significance to the African-American community within our neighborhoods.  We’re focusing on sites found on our new Civil Rights & Social Justice Map, discussing their connections to African-American History and the Civil Rights Movement.

With Moonlight’s recent Oscar win for Best Picture, we thought we’d take the opportunity to highlight locations on the map that are not only important to African-American history, but LGBT History as well.  While our map includes areas and individuals related specifically to each movement category, we also make sure to highlight the overlaps that exist within each.  Here are a few:

James Baldwin was born in Harlem in 1924 and became a celebrated writer and social critic in his lifetime, exploring complicated issues such as racial, sexual, and class tensions, as a gay African-American man. Baldwin spent some of his most prolific writing years living in Greenwich Village and wrote of his time there in many of his essays, such as “Notes of a Native Son”. Many of Baldwin’s works address the personal struggles faced by not only black men, but of gay and bisexual men, amid a complex social atmosphere. His second novel, Giovanni’s Room, focuses on the life of an American man living in Paris and his feelings and frustrations with his relationships with other men. It was published in 1956, well before gay rights were widely supported in America. His residence from 1958 to 1963 was 81 Horatio Street. A historic plaque memorializing his time there was unveiled on October 7, 2015.

Gay Street is often mistakenly thought to have been named for Sidney Howard Gay, editor of the National Anti-Slavery standard and noted abolitionist, but this is most likely not the case (he was only 13 when the name first appeared on maps). The street was, however, predominantly African American in the 19th century and known to be home to many African American musicians. It is a coincidence that Gay Street is located just one block from the Stonewall Inn, a landmark of LGBT history. The connotations of the word “gay” have changed over time, of course. It originally meant happy, carefree, and exuberant. By the late 19th and early 20th centuries, the word came to be associated with a lifestyle unfettered by the conventions of the day and as time went on, it was increasingly used to describe a particular sexual preference. The street name appears to go back to at least 1827, and though there is no conclusive evidence, most historians believe it was likely a family name.

Born in 1930, Lorraine Hansberry was a playwright and activist most commonly associated with Chicago, despite attending school and living much of her life in Greenwich Village. She first attended the University of Wisconsin-Madison, but left in 1950 to pursue her career as a writer in New York City. She moved to Harlem in 1951, attended the New School in the Village, and began writing for the black newspaper ‘Freedom’. In 1953, she married Robert Nemiroff, and they moved to Greenwich Village. It was during this time that she wrote A Raisin in the Sun, the first play written by a black woman to be performed on Broadway. The play brought to life the challenges of growing up on the segregated South Side of Chicago, telling the story of a black family’s challenges in trying to buy a house in an all white neighborhood. Hansberry separated from Nemiroff in 1957 and they divorced in 1964, though they remained close until her death. It was revealed in later years that Hansberry was a lesbian, and had written several anonymously published letters to lesbian magazine, The Ladder, discussing the struggles of a closeted lesbian. She was also an early member of Daughters of Bilitis. Sadly, she died of pancreatic cancer at the age of 34.

Judson Memorial Church was founded by Edward Judson in the late 19th century, during a time when the village had the largest African-American community in the city. Construction on the building began in 1888 with the backing of John D. Rockefeller and other prominent Baptists. The church’s mission has long been devoted to social outreach and since the 1890s, has been known for providing a home to artists, taking courageous stands and meaningful action for social justice, and welcoming everyone without exception. In 1957, Howard Moody became the senior minister and continued the church’s advocacy on civil rights issues, free speech, and and speaking out for issues usually considered immoral by Christians (such as abortion and the decriminalization of prostitution). In the 1950s, it was the first institution in the Village to offer counseling to drug addicts; in the 1960s, it led a nationwide network of Protestant and Jewish clergy who aided women in obtaining abortions before it became legal; in the 1970s, it offered refuge for runaway teens; and in the 1980s, it provided medical resources for AIDS patients. The church sanctuary (designed by Stanford White), campanile tower, and Judson Hall were designated landmarks by the New York City Landmarks Preservation Commission in 1966 and added to the National Register of Historic Places in 1974.

This site and the disturbances which surrounded it are considered the birthplace of the modern worldwide LGBT (Lesbian, Gay, Bisexual, and Transgender) Civil Rights movement, and the riots which took place here in late June, 1969, are commemorated and celebrated today in countries across the globe.  An important part of the story, however, is that a significant number of the patrons of the Stonewall Inn who participated in the riots, and those who gathered at the site over the following nights to continue to fight against police oppression, were people of color, many of them African-American.  The inclusion of African-Americans in the story of this fight against anti-LGBT oppression has been gradually integrated into the story of the Stonewall Riots, especially in the more recent designations by the New York City Landmarks Preservation Commission and the federal government.  President Obama famously linked the struggles for LGBT, African-American, and Women’s rights together when in his 2013 inaugural address he said “We, the people, declare today that the most evident of truths, that all of us are created equal, is the star that guides us still, just as it guided our forbearers to Seneca Falls and Selma and Stonewall, just as it guided all those men and women, sung and unsung, who left footprints along this great Mall to hear a preacher say that we cannot walk alone, to hear a king proclaim that our individual freedom is inextricably bound to the freedom of every soul on Earth.”

To learn more about civil rights and social justice history in Greenwich Village, the East Village, and NoHo, explore our map here.