March is Women’s History Month. We here at GVSHP are celebrating by highlighting different sites and locations of significance to Women’s history in the Village. A great source is our recently-released Civil Rights & Social Justice Map, which has more than twenty sites connected to Women’s history and women’s rights; click here to see them all. 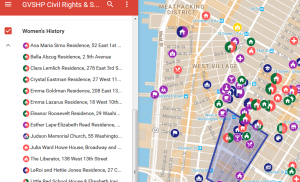 As part of the women’s movement of the 1970’s, feminist restaurants opened in much the same way that suffrage restaurants and tea houses had in the beginning of the 20th century, both with the purpose of furthering women’s causes.  The first feminist restaurant in the country was located right here in the West Village, Mother Courage.  Opened in May of 1972, it was located at 342 West 11th Street, and its founders were women’s rights activitists Dolores Alexander and Jill Ward.

Mother Courage was  named after the character “Mother Courage” in a play by Bertolt Brecht. According to a 2005 interview with Alexander, she and Ward used funds borrowed from friends to buy and renovate a run-down luncheonette called Benny’s. Opening night the restaurant was filled to overflowing with many members of the New York Radical Feminists group in attendance, with those gathered singing such songs as “There is Nothing Like a Dame.”  Regulars included Susan Brownmiller, Kate Millett and Jill Johnston.  People magazine covered the third anniversary of the restaurant.

Men and women dined at the restaurant, though women took priority. Wine was poured for women to taste rather than their male guests. The restaurant also encouraged women to dine alone, and created a safe haven for them. Dolores Alexander was a lifelong feminist and women’s rights activist, and believed up until her death in 2008 that the women’s rights movement was still needed in contemporary times.

Be sure and join us for our upcoming walking tour on Radical, Notorious Women of Washington Square,