On this last day of Women’s History Month, we would be remiss if we didn’t salute one of my favorite 20th century female figures, Eleanor Roosevelt.  Aside from being First Lady (1933-1945), a political leader, a social reformer, a civil rights activist, a writer, a mother and a UN delegate (1945-1953 & 1961-1962), she was also a Villager.  As seen in our Civil Rights and Social Justice map, she lived at 29 Washington Square West.  The following is a previous Off the Grid post about Eleanor Roosevelt by Lauren Snetiker.

There are many reasons to celebrate the life of Eleanor Roosevelt, the longest-serving First Lady of the United States. Not only did she change the role from passive hostess to active political leader, she also became an outspoken politician in her own right. During her time as First Lady (from 1933 to 1945), Eleanor Roosevelt held press conferences on important issues (from women’s rights to children’s causes), wrote a syndicated newspaper column sharing updates, presented lectures, and led marches and protests.

A born and bred New Yorker, she was also a Greenwich Village resident, residing at 29 Washington Square West (MacDougal Street and Waverly Place) for several years after FDR passed away (from 1945 to 1949). During her time as a Village resident, Eleanor continued making strides for a variety of significant causes. In 1945 President Truman appointed her as a U.S. delegate to the United Nations. A year later she was elected as the chair of the UN Commission on Human Rights which drafted the Universal Declaration of Human Rights. The UN General Assembly passed the declaration in 1948. 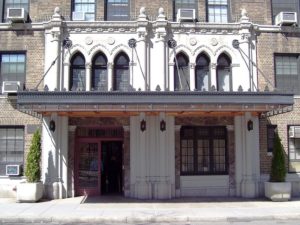 “…The UN Commission on Human Rights…would not have succeeded in reaching agreement without the leadership of the Commission’s chair: Eleanor Roosevelt. ER herself regarded her role in drafting and securing adoption of the Declaration as her greatest achievement.” – John Sears, Research Consultant, Roosevelt Institute (Hyde Park, NY).

Eleanor Roosevelt is regarded as one of the most renowned civil rights activists of the twentieth century. We are lucky to call this passionate and fearless leader a past resident of Greenwich Village. It is advocates like her who helped make our community such a vibrant and unique place.