“Miss West, are you trying to show contempt for this court?”
“On the contrary, your Honor,” Mae sweetly responded. “I was doin’ my best to conceal it.”

Known for her easy, breezy banter, laden with double entendre, Mae West was a force to be reckoned with. In the mid-1920’s, West’s much-lauded vaudeville career was on the wane. In an attempt to reinvent herself, West co-wrote a series of comedy-melodramas for herself as Broadway “star vehicles.” The series of bawdy, salty, free- spirited plays created a New York sensation and once again thrust her onto the front pages, reinvigorating her fame. But her most interesting coup and inadvertent publicity stunt was being arrested on obscenity charges.

Her bawdy 1926 play Sex, the story of a Montreal prostitute, filled the house for a year before New York’s deputy police commissioner raided West and her company, charging them with lewdness and the corrupting of youth. The star spent the night in the Jefferson Market Courthouse and the tabloids went crazy, and on April 19th, 1927, was sentenced to ten days in jail.

The grand jury claimed that her “obscene, indecent, immoral, and impure drama” would aid and abet “the corruption of the morals of youth.”  The court offered to drop the charges if she would close the show, but West was too savvy an entrepreneur to go quietly. Her instincts told her that in the business of show, crime pays.  She used the opportunity to ride to the prison in a limousine, report from inside prison that she was enjoying dining with the prison warden, and let loose to the tabloid press that she wore silk panties under her prison uniform.   And that was “marketing gold!” 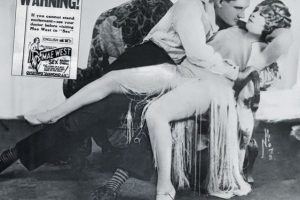 The theater season that year was filled with some of the most acclaimed pieces of 20th century theatrical literature; Eugene O’Neill’s The Great God Brown, Sean O’Casey’s Juno and the Paycock, and Noel Coward’s Hay Fever, just to name a few. But Sex outlasted almost all of its competitors and did boffo box office.

Due to her newfound notoriety, West, despite being 38 years old at the time, found herself starting a movie career when Paramount Pictures offered her a contract at $5000 a week ($80,000 now). What’s more, they allowed her to re-write her lines in the films. Her first film, Night After Night, set the tone for her now famous persona from her first line. When the hat check girl remarks to her, “Goodness, what beautiful diamonds,” West replied, “Goodness had nothing to do with it, dearie.” Within three years she was the second highest paid person in the United States behind only William Randolph Hearst.

Perhaps West’s most famous role, that of Diamond Lil, was born of the time she spent in prison. Making the best use of the experience of her 10-day her incarceration at Welfare Island, a former name for Roosevelt Island, the star took notes on the inmates and used this material to create her trademark role and the eponymous play.

You can read more about the Jefferson Market Courthouse here and here.