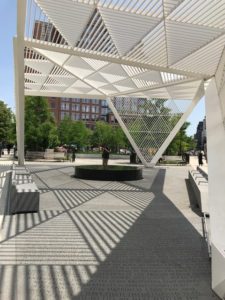 GVSHP’s Annual Village Awards Ceremony will be held on Tuesday, June 6th at the New School Auditorium, 66 West 12 Street from 6:30 PM until 8 PM.  The Regina Kellerman Award is presented each year at the VA’s in honor of the Society’s first executive director, who dedicated her inspiring career to the preservation of the architecture and built environment of the Village. This year, GVSHP is proud to bestow the Regina Kellerman Award upon a triumvirate: The AIDS Memorial at the St. Vincent’s Triangle Park, the St. Vincent’s Triangle Park, and the restoration of the former O’Toole/Maritime Union Building at 30 7th Avenue.

AIDS Memorial at St. Vincent’s Triangle Park:
Founded in early 2011 as a grass-roots effort by Christopher Tepper and Paul Kelterborn, the AIDS Memorial is now a 501c3 entity with an 18-member board chaired by GVSHP member Keith Fox.

The memorial sits at the gateway to a new public park adjacent to the former St. Vincent’s Hospital, which housed the city’s first and largest AIDS ward. The former St. Vincent’s is often considered the symbolic epicenter of the disease, and it figures prominently in The Normal Heart, Angels in America, and other important pieces of literature and art that tell the story of the plague in New York. The park site is also less than a block from the LGBT Community Center on 13th Street, where ACT-UP and other AIDS advocacy/support groups first organized, and it sits within blocks of the first headquarters of GMHC and the office of a doctor on W. 12th Street that Lambda Legal successfully prevented from being evicted for treating early AIDS patients. Furthermore, the site is a fulcrum of activity in the Village.

The design of the space was born of an international design competition launched in November 2011, chaired by Michael Arad, the designer of the National September 11 Memorial, to generate ideas for the memorial park design. Nearly 500 architects from around the world submitted designs. Studio ai of Brooklyn, NY, led by Mateo Paiva, Lily Lim and Esteban Erlich, won the competition to become the park’s architect. Their design features an 18-foot steel canopy as the dramatic gateway to the new St. Vincent’s Hospital Park in the West Village. The architects created an opportunity for engraving in the paver stones of the memorial, the text for which was selected and designed by world-renowned visual artist Jenny Holzer, and features selections from Walt Whitman’s “Song of Myself. “ “Song of Myself” is included in Whitman’s work Leaves of Grass. It has been credited as “representing the core of Whitman’s poetic vision. The hope for the text of the memorial is that it will have “emotional permanence” with the idea that the poem will still move people hundreds of years from now.

When designing the new memorial, the architects created a destination for people to gather to reflect and learn. The memorial design, combined with the adjacent park’s open plaza, is meant to be both commemorative and serve as a community park that is a part of the family of Village parks. It was designed to create a destination and venue for events. The founders envision a World AIDS Day vigil or smaller gatherings to remember lost loved ones.

The St. Vincent’s Triangle Park:
St. Vincent’s Triangle Park has been transformed from a pretty bleak and forbidding corner of the West Village into a much used, much-loved park, with its NYC AIDS Memorial newly opened to the public. It was designed in the tradition of the family of Village triangle parks at the request of the Community Board and was created in the style that is congruent with other similar green spaces within the neighborhood. A cozy, verdant haven in the middle of a busy intersection, the park serves as a lovely neighborhood respite. The park melds nicely with the AIDS Memorial portion at the southwestern part of the park, creating a place of rest and remembrance.

The guiding principle behind the restoration of the building was to respect the very colorful and unique history of the facility and the surrounding neighborhood throughout the process. They made the decision to remove the little tiles on the outside of the building, partly because they had not been part of the original design, but mostly because they had become old, broken, and discolored. After the tiles had been removed, the building was painted with the same paint that was used on the Guggenheim (the building’s architect, Albert Ledner, was a disciple of Wright’s, and based the building upon the Guggenheim), and it now gleams. The interior of the building was in a terrible state, and a gut renovation was necessary. The goal was to build a state of the art stand-alone emergency room, and reflect the nautical theme throughout the building. The designers were very thoughtful and deliberate in their decisions – much of the design downstairs was done to create a calm environment which would be as comfortable as possible for patients, unlike many emergency rooms. The choice of colors (blues) and shapes (lots of circles) brings to mind a ship. The downstairs has rooms for patients to be seen by physicians, including facilities for telemedicine, and rooms with testing equipment including a very high-resolution cat scan and x-ray machines.

A state-of-the-art lab in the basement can process samples and deliver results quickly. The entry to the upper floors is through a door on 13th Street – this arrangement was designed so that patients coming in for surgery or imaging would not have to go through the emergency area. On the upper floors is a photo montage of the Village and the High Line – the designers have gone to great lengths to stress the building’s conection with the neighborhood.

The building has a number of rows of glass cubes at the bottom – this was meant to create the illusion of a ship floating above the water. Now, with all the cubes replaced and the lighting adjusted, in the evening the facility really does looks like it is a ship on the water as was originally intended, since the building originally served as a union hall and gathering spot for those who worked in the shipping industry.

Besides being concerned with the physical appearance of the building, the administration of the facility has been very eager to work with the community. They provide free flu shots and CPR courses. They have received high satisfaction ratings from their employees.

We are so pleased to honor these three entities for their significant contribution to the life of our city and our neighborhoods.

We look forward to celebrating with everyone at the Village Awards ceremony on June 6th. The event is at the New School, 66 West 12th Street from 6:30-8, followed by a reception. The event is free, however RSVP’s are required.

Read more about the other awardees here.

Please see this great article below that discusses the awards and transformation of the block.

One response to “2017 Regina Kellerman Award Goes to a Memorial, a Park, and a Restoration”