Note this is an update of a post previously posted by Matthew Morowitz.

A Roman Catholic Church formerly located at 440 E. 12th St., Mary Help of Christians was demolished in the summer of 2013 to make way for new development.  To try and preserve the site, there was an outpouring from the community in an effort to protest the demolition and save the historic structure.  A rally was also organized by GVSHP and allied community and preservation groups and Mary Help of Christian parishioners on May 22 of that year, to protest the planned demolition of the church and the city’s refusal to landmark the structure in spite of its clear historic and architectural significance.

Many organizations, including GVSHP, called for a complete archaeological review to take place on the former cemetery of the church.  According to a press release from the rally:

“The church was formerly the site of the cemetery of Old St. Patrick’s Cathedral, where thousands of people were buried starting in the early 19th century. This was only the third and at the time the largest Catholic Cemetery in New York. While the graveyard was moved to Calvary Cemetery in Queens in 1909, it is not known if all remains were removed and cleared from the site or if some still lie in burial underneath.”

A number of local and preservation organizations had written to developer Douglas Steiner and the city’s Department of Buildings and Landmarks Preservation Commission to notify them that a very large cemetery was formerly found on this site, and calling for a complete archaeological evaluation of the site as required by law in such cases before any work proceeds, to prevent disturbance of any burial site or human remains which may remain here.” 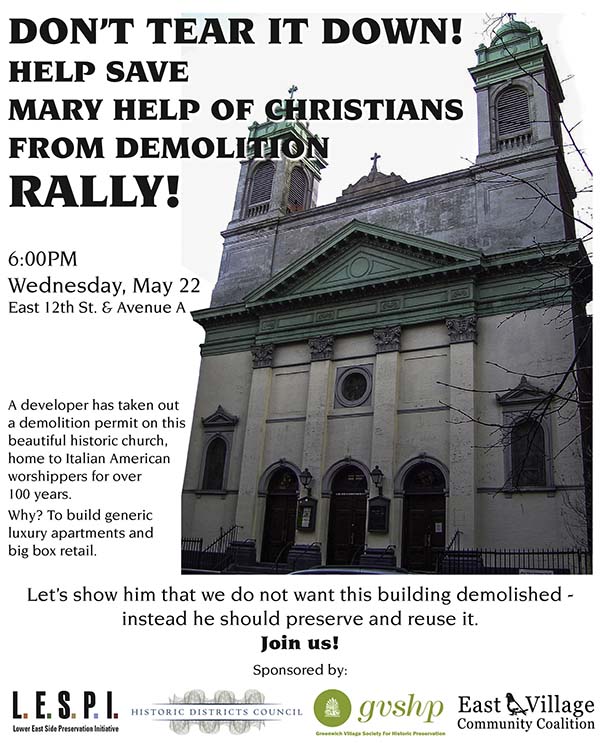 Unfortunately, the site never was given an archaeological investigation, and so The Steiner could be built on top of bodies.  As noted above, 41,016 interments were officially recorded there.  But records only show a much smaller number of bodies having been removed and re-interred from this cemetery to one in Queens.  It was not uncommon during the 19th and early 20th centuries for cemeteries in Manhattan to be built upon without complete or in some cases any relocation of the bodies buried within.

While we may never know whether or not the Steiner has dead bodies underneath, evidence of the cemetery which once covered the site is still appears to still exist on the block; GVSHP research indicates the stone wall extending from 11th to 12th Street on the western end of the block is likely a remnant of the cemetery (read more here).

Douglas Steiner courted further controversy at some point by seeming to go back on a commitment to include affordable housing on site.

In 2015 he switched his plans from rentals to condos. Now his development is enmeshed in a complex arrangement with four other properties in the area that entails “generating” and “receiving” sites for the credit for the affordable units that allowed him to build bigger than a project without affordable units.

One of the East 13th Street properties in this intricate deal is one of the former squats in the neighborhood that were legalized after many years of work sweat equity and community pressure, and was the subject of a recent NYPost article.

Today we here at GVSHP want to take this time to highlight a site that was an important part of the East Village but is no longer with us.  You can read more about Mary Help of Christians as the center of the Italian community here, as well as memories of the church by former parishioner Janet Bonica here.

One response to “Remembering Mary Help of Christians”