Earlier this year, we were gifted with a truly extraordinary set of photographs from a photographer and longtime East Villager. There’s still some work to be done before we can present you the entire bunch (stay tuned for more on that soon!) but until then, I thought I’d share an image that really caught my eye.

This photo was taken on East 6th Street in 1971. I’m sure you’re thinking that it looks much older than that. But in reality this is a 1970s photo of East 6th Street all dolled up to look much older – for the filming of the Godfather II! Pretty cool, right? The Oscar-winning sequel used East 6th Street to depict Vito Corleone’s Italian neighborhood of 1917, where he first started his family and his life of crime. I even found a couple stills from the movie where you can clearly make out the buildings and storefronts on the block – here you can see the double arched windows of the S. Fiore storefront at the far left of our photo, and here you can see that beautiful painted glass storefront bearing the name “The Washington.” 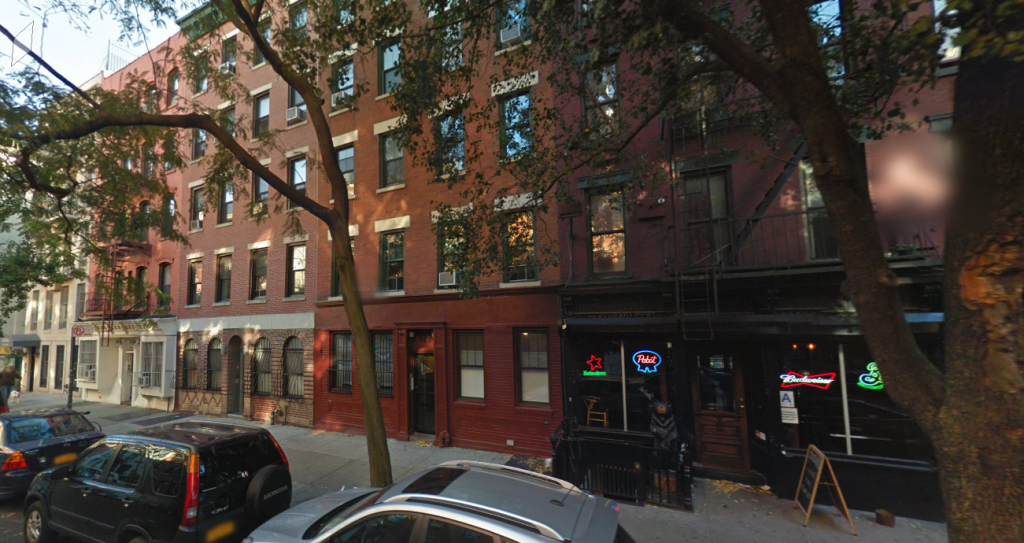 This is 100 years after the time our photo depicts, and 45 years after it was actually taken.  Thankfully we’ve managed to hold on to this entire strip of tenements, and many of their architectural details. The arched windows at 524 and the protruding glass storefront and centered wooden doorway of 520 (now a bar, rather than The Washington) all remain. At 522, the ground-level configuration is the same although in The Godfather image they appear to be two separate storefronts (one with an awning, one with Instituto Italiano at the frieze). This building’s upper floors seem to have lost their arched windows and lintels, too.

Since May is Lower East Side History Month, I figured there was no better time to enjoy these fun photos. We usually think of the neighborhoods to the west when discussing Italian culture, but even the East Side has a role in that history! The Godfather II also filmed at another location in the East Village – Vazac’s Horseshoe Bar on Avenue B and 7th Street. Some dramatic mob action takes place in this neighborhood favorite dive bar, but I won’t spoil it for anyone who hasn’t seen the movie yet. If you couldn’t think of a good reason to rent it, now you’ve got one!

And if you like historic images, GVSHP maintains an entire archive which you can search and browse online; check out the fabulous collections including historic Meatpacking District photos, early scenes of Veselka, and cool historic postcards of Astor Place. The Godfather image isn’t up there yet but it will be soon with lots of more exciting images so stayed tuned!