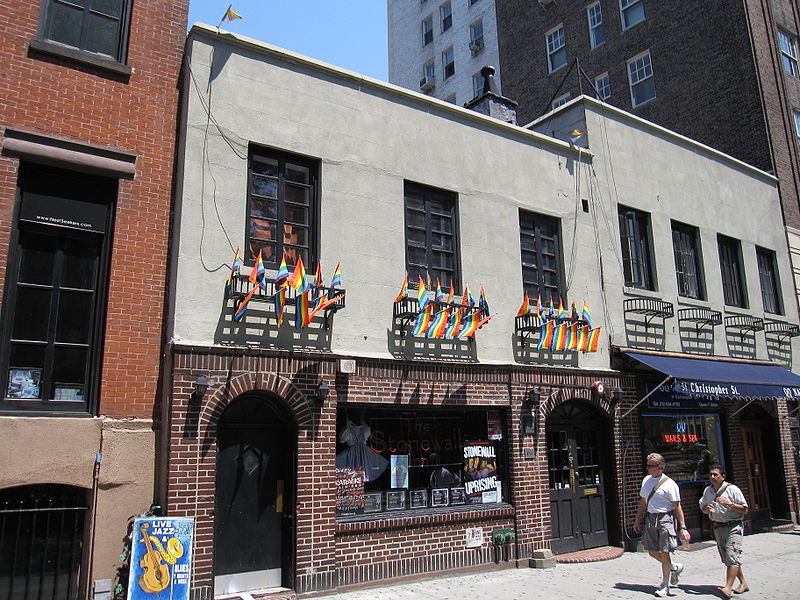 June is Pride Month, which makes it an especially exciting time to be in the Village.  LGBT history is closely tied with the Village and its environs, and throughout the course of this month we’re focusing on four areas of our neighborhood — the West Village, East Village, South Village, and NoHo — to highlight important locations, either long gone or still standing, that join the neighborhood narrative with this diverse history.  All of these sites can also be found on our GVSHP Civil Rights and Social Justice Map, and we encourage everyone to check it out and let us know about other histories and locations to be added.  To kick off Pride Month, we will be starting with what is probably considered the epicenter of the modern LGBT Rights Movement, the West Village.

It’s no secret that the West Village continues to be an important social setting for LGBT people, but it’s also the site of many important moments in LGBT history and the LGBT rights movement.  While many places are no longer with us, quite a few important ones remain.  We here at GVSHP recognize and celebrate these pieces of LGBT history, both as they add to the legacy of the LGBT rights movement and augment the unique character and narrative of the neighborhood and the Greenwich Village Historic District.  Below are a few standout locations, some that are thankfully still with us and still serving the LGBT community and others that may be gone but their memory still remains strong with the community:

In the early morning of Saturday, June 28, 1969, dozens of gay men, lesbians, and transgendered people, many of them people of color, resisted a routine police raid on the Stonewall Inn. The riots that followed over the course of three days are widely considered to be the single most important event leading to the modern gay, lesbian, bisexual, and transgender (LGBT) rights movement in the United States. Stonewall Inn was the very first site ever listed on the National Register of Historic Places for its connection to LGBT history in 1999; that application was co-sponsored by GVSHP.  GVSHP also got Stonewall landmarked by the City of New York in 2015, the first site ever designated based upon LGBT history, and was part of a broad coalition which got Stonewall named a U.S. National Monument, the first in the country dedicated to the LGBT rights movement, on June 24, 2016.

Located just a block away from the famous Stonewall Inn, Julius’ is often called the oldest continuously operating gay bar in New York City. It was originally established in 1867 and by the 1950’s was attracting gay patrons.

On April 21, 1966, members of the New York chapter of the Mattachine Society staged a “Sip-In” and that helped establish the right of homosexuals to be served in licensed premises in New York.  In 2012 GVSHP got Julius’ determined eligible for listing on the National Register of Historic Places for its LGBT history, and it was listed in 2016, the 50th anniversary of the Sip-In.  In 2016, Julius’ also received a Village Award from GVSHP.

The first meeting of what came to be the organization now known as PFLAG, Parents, Families, and Friends of Lesbians and Gays, took place here at what is now known as the Church of the Village, at 13th Street and 7th Avenue, then known as the Metropolitan-Duane United Methodist Church.

In June of 1972, Jeanne Manford, a school teacher from Queens, marched in the Christopher Street Liberation March, the precursor of today’s LGBT Pride Parade, with her gay son Morty to show support for her child. So many people came up to Jeanne and asked her to speak to their parents that she decided to hold a meeting for parents struggling with accepting and supporting their gay children. That meeting took place on March 26, 1973, and eventually led to the founding of PFLAG, which now has 400 chapters nationally and 200,000 members, and provides resources and support to the families of Lesbian, Gay, Bisexual and Transgender people, and lobbies for greater understanding and equal treatment of LGBT people.   In 2013 GVSHP partnered with PFLAG and the Church of the Village to place a plaque on the front of the church commemorating the first meeting and founding of PFLAG having taken place there.

St. Vincent’s Catholic Medical Center was originally founded in 1894 and was New York City’s third oldest hospital. In the 1980’s, it became one of the first institutions to respond to and treat HIV and AIDS. Housing the first and largest AIDS ward on the east coast, it is often referred to as “ground zero” of the epidemic. The hospital closed in 2010 due to the financial crisis and in 2013 it was completely demolished to make way for a new condo development.

A New York City AIDS Memorial (also the winner of this year’s GVSHP Regina Kellerman Award) now stands at the northwest corner of the former St. Vincent’s Triangle, which housed mechanical equipment for the hospital across the street.

The LGBT Community Center has been a home and resource hub for the LGBT community in New York City since its founding in 1983. The center celebrates diversity and advocates for justice and opportunity. The building that houses the community center is a beautiful brick Italianate structure that was originally built in the third quarter of the 19th century as Public School 16. It served as various schools for over a century and was sold to the Lesbian & Gay Services Center, Inc. in 1983. Today, it has grown to become the largest LGBT multi-service organization on the East Coast and the second largest in the world. Other organizations that have been located here (or got their starts here) include SAGE (Senior Action in a Gay Environment), the Metropolitan Community Church (a LGBT congregation), the AIDS activist group ACT UP, and GLAAD (Gay and Lesbian Alliance Against Defamation).

One response to “LGBT History in All Corners of the Village: The West Village”