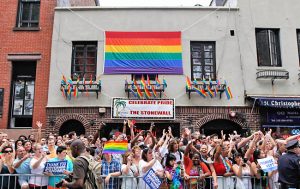 Lesbian, Gay, Bisexual and Transgender Pride Month (LGBT Pride Month) is currently celebrated each year in the month of June to honor the 1969 Stonewall Riots in Greenwich Village. The Stonewall Riots were a tipping point for the Gay Liberation movement in the United States. Celebrations include pride parades, picnics, parties, workshops, symposia, and concerts. Memorials are held during this month for those members of the community who have been lost to hate crimes or HIV/AIDS. The purpose of the commemorative month is to recognize the impact that lesbian, gay, bisexual, and transgender individuals have had on history locally, nationally, and internationally.

While we blogged about some of the NYC sites last week, we thought it important to add a few others to the list of “must visit sites.”

The Gay Liberation Monument at Christopher Park is located right across from the Stonewall Inn (51-53 Christopher Street).  It honors the gay rights movement and commemorates the events at the Stonewall Inn opposite this park that gave rise to the movement.  Created by artist George Segal, it was finally unveiled in 1992 after a decade of opposition to the sculpture and renovations to the Park itself. It depicts four figures in total—two standing men, and two seated women. The Parks Department says, “the result is specific, evocative, and understated, showing the public comfort and freedom to which the gay liberation movement aspired.” 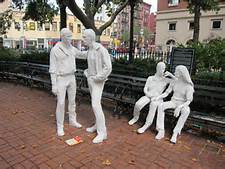 Pulitzer Prize-winning poet and playwright Edna St. Vincent Millay lived here for brief time during the 1920s. Millay was openly bisexual, is considered an important figure in LGBT history, and subsequently helped establish the Cherry Lane Theater, focused on experimental plays. The house itself, considered the narrowest in New York City, has also been home to other celebrated figures like anthropologist Margaret Mead and cartoonist William Steig. 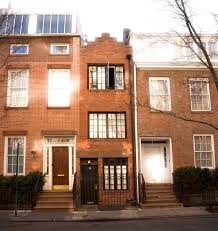 The Pyramid Club was a defining club of the East Village scene in the 1980’s. The club was a hangout for both the fashionable showing off their latest looks, as well as for the counter cultures emerging in the neighborhood, leading the New York Times to write, “There is nothing quite like this club anywhere in New York, and it adheres to no formulas. In fact, it is more like the Paris boites of the 50’s or the speakeasies of the 20’s than anything else.”  The club became a hangout for “a new breed of politicized drag performers” like Lypsinka, Lady Bunny, and RuPaul, whose first New York City show was at the Pyramid Club in 1982. Legend has it that in the early 1980s, after partying at the Pyramid Club, a group of drag queens walked over to Tompkins Square Park and put on an impromptu outdoor festival which became the first Wigstock Drag Festival. Over the next 20 years, Wigstock would become more formalized and would grow to be a major New York City event, attracting world-wide attention and participation.

Madonna, who frequented the Pyramid Club, attended an early AIDS benefit there in 1986 for her former roommate and close friend, Martin Burgoyne. Andy Warhol, Keith Haring, and Kenny Scharf were also in attendance at Burgoyne’s benefit, supporting their ailing friend at a time when misinformation about the disease pervaded the American public and it “had become a plague in the bohemian neighborhoods of downtown Manhattan.”

In 2008, The Pyramid club was determined eligible for listing on the State and National Registers of Historic Places after GVSHP researched and nominated it for consideration. The listing highlighted both the unique architectural character of the building, as well as the variety of significant cultural uses over the years.

In 2012, the building was included in the East Village-Lower East Side Historic District, designated by the New York City Landmarks Preservation Commission; the building had originally been left out of the city’s proposed district, but GVSHP and our allies fought very hard to get it included.

The Daughters of Bilitis were the first civil rights group dedicated to fighting for the rights of lesbians, and though it was formed in San Francisco, the organization expanded to New York in the 1950’s. It was conceived as a social alternative to meeting in lesbian bars, which were subject to frequent raided and harassment at the hands of the police at the time. The group educated women about their rights and provided a safe space for those who were afraid of coming out. 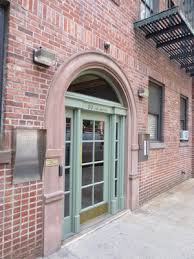 This lesbian bar in the West Village has been a popular LGBT haunt since it first opened in 1994. More than 20 years later it’s still going strong, and stands out for its quirky ceiling decor, the jukebox, and the diverse crowds that frequent the place. The bar has some great weeknight specials, too. 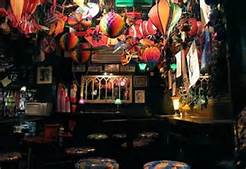 The Judson Memorial Church altered its mission in the 1950’s, and has since been an outspoken advocate for civil rights issues. In the 1980’s, it helped provide critical resources to people with AIDS. Its annual Gay Pride Sunday service is one of the church’s biggest events of the year, and an estimated third of its congregation represents the LGBT community. The church sanctuary, its campanile tower and the attached Judson Hall were designated landmarks by the New York City Landmarks Preservation Commission in 1966, and were added to the National Register of Historic Places in 1974. 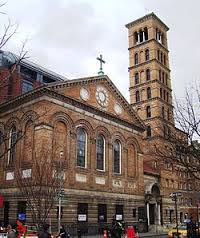 The Church was commonly referred to as “Peace Church” especially for its activism against the Vietnam War, but it was also known for its acceptance of the LGBT community. In 1973, Rev. Paul M. Abels became the city’s first openly gay clergyman when he became the church’s pastor, and he remained in this position until 1984. The Church was converted into luxury condos in 2004. 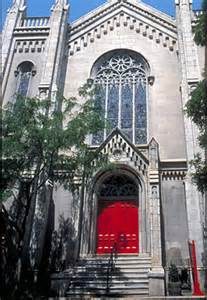 For more ideas and sites to see in our neighborhoods, visit GVSHP’s Civil Rights and Social Justice map.  The neighborhoods are teeming with places to go to commemorate the people and the movements that have moved our society forward.