Perhaps the most famous duel in American history took place on July 11, 1804, a result of a bitter political rivalry.  Aaron Burr and Alexander Hamilton had been at loggerheads off and on throughout their careers, but escalating tensions between the two led to their face-off on a dueling ground in Weehawken, NJ  on that fateful day.

Duels of a political nature had a very prescribed protocol in the early days of our nation.  In fact, duels by political rivals were not uncommon.  Sometimes, when politicians lost elections, they initiated duels to redeem their reputation. Between 1795 and 1807 there were sixteen duels and near-duels in New York City, most of them tied to elections.  In a typical scenario, the loser of an election or one of his friends provoked a duel with the winner or one of his friends in the hope of proving the losers brave and honorable men who deserved the public trust, thus using the practice to repair the damage to their reputation wrought by a democratic election. Political duelists in this period didn’t want to kill their opponents. The point of a political duel was to prove a man willing to die for his honor, not to shed blood.*

Unfortunately in the case of Hamilton and Burr, there were two losers.  Hamilton took a gunshot wound to the abdomen and died a day later.  Burr became an outcast and fled New York to escape prosecution.  He did return after a few months in the South, but his political reputation was ruined.

The two bitter rivals and participants in this notorious duel were both deeply connected to Greenwich Village in many ways; in fact, parts of Greenwich Village might have developed much differently were it not for the duel and its aftermath. Below are excerpts from previous Off the Grid posts that shed light on some of the places that were a part of the two men’s lives.

54 MacDougal Street
Located in what is now the Sullivan-Thompson Historic District, this nearly 200 year old three-story house and one-story backhouse was built in 1820, making it one of the oldest extant structures in this part of Manhattan when GVSHP and our supporters fought unsuccessfully to save it in 2013. Until it was demolished, the structure maintained basic elements of an early 19th century lower Manhattan house and served as one of many recognizable gateways to the South Village. 54 MacDougal Street began as a residence, and over the years has housed model railroad supply companies, art galleries, and antique stores.

In 1814, Aaron Burr sold the land upon which 54 MacDougal Street was built. Ezra Weeks, one of early New York’s most prominent builders, who was involved in the construction of Alexander Hamilton’s uptown estate as well as Gracie Mansion, purchased the land from Burr. Hamilton’s duel partner also had a strong connection to Weeks; Weeks’ brother Levi was the defendant in the infamous and precedent-setting Manhattan Well Murder Trial of 1800, the first recorded murder trial in the United States. Ezra used his wealth and influence to get both Hamilton and Burr to defend his brother against the charge of murdering his fiancé, Elma Sands. Read more about the famous trial and the other prominent Americans who have lived at 54 MacDougal Street HERE.

The King-Charlton-VanDam Historic District
This distinct neighborhood started in the early 19th Century as a piece of “’instant city’ developed from one large country estate by the great real estate developerbof the day, John Jacob Astor.” It was the site of one of the most beautiful mansions in Manhattan’s history, the famous “Richmond Hill,” a great Georgian house built in 1767 for Major Mortier, in New York “on the King’s business.” During the Revolution, George Washington used the mansion as his headquarters. Later, the house was bought by Aaron Burr, who utilized it for lavish entertainment as a brilliant background for furthering his ambitions. After the famed duel between Hamilton and Burr, the latter was forced to leave the City, and his estate was taken over by Astor. However, Burr retained the right to buy back the house and part of the land anytime he wanted to within the next twenty years, and in 1817 Burr sold it back to Astor, who promptly developed the property. Read the King-Charlton-VanDam Designation Report for more information on this charming and important preserved district. 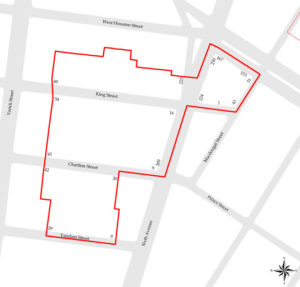 Following the infamous duel, Hamilton was brought to the home of his friend William Bayard whose estate was in the what is now the West Village.  The structure has been demolished, but a plaque marking the spot is on a structure at 82 Jane Street. The exact location of the house where Hamilton died is probably a bit to the north of this location, although the estate of Mr. Bayard covered the area. 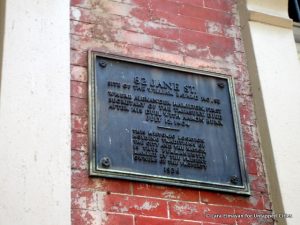 You can read more about other Vice Presidents of the Village and Hamilton’s final resting place here.