On August 2nd, 1967, MacDougal-Sullivan Gardens was designated a New York City historic district. These 22 homes surround a beautiful private garden oasis, and this was one of the first historic districts to be designated in our area, prior to even the Greenwich Village Historic District in 1969 (only the Charlton-King-Vandam Historic District was designated earlier, in 1966). The twelve homes along MacDougal Street were built in 1844 on 22 foot wide lots, followed by the ten narrower, 20′ foot-wide homes on Sullivan Street in 1850. All 22 were built in the Greek Revival style. 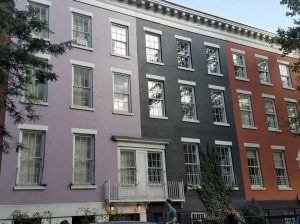 This special oasis and how it came to be has a rich history reflecting virtually every stage of the Village and New York City’s development — from the Dutch and the first freed black slaves, through the Village’s early 19th century development as a successful merchant neighborhood, to its late 19th century transformation, to a teeming and largely poor to working-class immigrant district, to its rebirth in the 20th century as a home to artists and those connected to the arts, and beyond.

According to the landmark designation report, the history of the land underneath MacDougal-Sullivan Gardens can be traced all the way back to the early years of New Amsterdam. Wouter Van Twiller, Governor of New Netherlands from 1633-38, acquired the land in 1633. The parcel containing the MacDougal Sullivan block was conveyed on December 15, 1644 to Pieter Santomee, a free black slave who had originally worked for the West India Company. The land passed through several owners until it was acquired by Nicholas Bayard in 1755, whose son conveyed it to Daniel Ludlow and Brockholst Livingston in trust for the benefit of creditors. In 1790 the trustees began conveying the lots. The land was purchased by merchant Nicholas Low in 1796, and his estate developed the property several decades later as twenty-two single family rowhouses for middle-class families in 1844 and 1850. 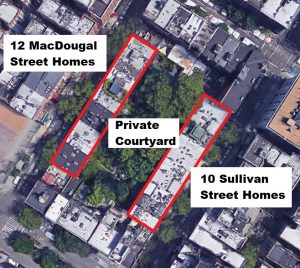 However, by the late 19th century the Village, and especially the “South Village” south of Washington Square in which these houses were located, were awash with immigrants.  No longer a middle-class precinct, the area became home to the working-class and in some cases the very poor.  The improverished “Little Africa” neighborhood was located directly west, and the “rookeries” or tenements and rooming houses of the Minettas (Street, Lane, and the no longer extant Minetta Place) were among the most notorious in the city, and the subject of exposes by the likes of Jacob Riis. During this time the houses of today’s MacDougal-Sullivan Gardens also fell on hard times, and were known to be in a state of decay and dilapidation.

But by the early 20th century, the Village has begun to attract a new kind of immigrant — artists, and those attracted to the arts, who not only did not mind but preferred living in somewhat rundown and colorful neighborhoods like these.  In 1920, the land and buildings that today comprise the Gardens were sold by the Low Estate to the Hearth and Home corporation, of which William Sloane Coffin was President.

Coffin did something which was radical at the time, but was soon imitated all over the Village and New York. To appeal to a new type of resident who liked the funky charm of the area and celebrated the type of communal living one had in neighborhoods like the Village, but wanted certain amenities, he renovated the block, combining the backyards to create a private garden space. Other changes to the building as part of the Coffin development were painting the facades varying pastel colors, adding some Federal style elements to the buildings such as removing the stoops, and building out the top floors.

The homeowners who moved in formed the MacDougal Sullivan Gardens Association in 1920, and have continued to maintain the gardens and unique appearances of the homes almost 100 years later.

Unfortunately, the buildings on the north side of the block along Bleecker Street and those on its southern, Houston Street side were not protected when MacDougal Sullivan Gardens was designated a landmark district in 1967, nor was any of the surrounding South Village. That is until GVSHP successfully fought to get much of the South Village landmarked in three successive phases in 2010, 2013, and 2016.

However, this did not ultimately include the row of houses on the south side of the block along Houston Street, which the City adamantly refused to landmark (though it was built as part of the same original development as the MacDougal Sullivan Gardens houses in the 1840s), resulting in the demolition of 134 and 136 Houston Street,

And while landmark designation of the South Village did include the row of houses on the north side of the block along Bleecker Street, the City waited until after demolition permits were issued for 178 Bleecker Street, a beautiful 1861 row house that has since been replaced by a somewhat ungainly 8-story building.

To celebrate the 50th anniversary of the landmark designation of MacDougal-Sullivan Gardens, GVSHP held a walk and draw tour of MacDougal Sullivans Historic District.

Read more about the district’s history here. Read about some of the most famous current and past residents of the Gardens in this NY Times article.