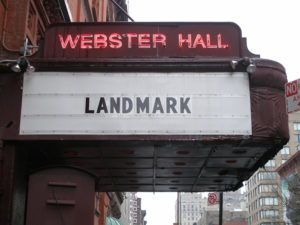 August 8th, 2007 was a joyous day in the GVSHP office – because that’s when we first received written notice from the LPC than they planned to consider Webster Hall for landmark designation. GVSHP had worked hard to achieve this milestone, providing the LPC with a dossier of research on the historic hall and its cultural significance. The hard work paid off – by March of the following year, Webster Hall had joined the ranks of New York City landmarks. The building, erected in 1886 on land that was once a part of Peter Stuyvesant’s farm, is notable not only for it’s handsome Queen Anne and Renaissance Revival architecture, but also its remarkable legacy as a public gathering space. In the 19th century, the streets around Union Square were filled with similar grand assembly halls, but Webster Hall is special for being one of the few survivors. GVSHP has written extensively about the history of Webster Hall for this blog. In a great post from 2011, former staff member Drew Durniak writes:

From the start, Webster Hall was a “hall for hire” where groups could rent either certain rooms in the building or the entire space for whatever functions they chose. In 1886, the New York Times noted that the hall was “intended for balls, receptions, Hebrew weddings, and sociables.” By the turn of the twentieth century, the area near and south of Union Square was packed with large and small structures housing theaters, dance halls, and other forms of entertainment, but today very few of these buildings remain intact or are not used for their original purpose.

Over the years, Webster Hall changed from general meeting hall to legendary concert venue, and everything in between. If the walls of Webster Hall could talk, they would tell of bold socialist organizers, iconic American authors, counter-culture anarchists, and brash rock-and-roll stars. But the interior walls may be telling a different story by this time next year. Earlier in 2017, the historic concert hall was purchased by AEG, a global sports and entertainment presenter (the company also runs Barclays Center). Prior to the sale, Webster Hall was family owned and operated for 27 years. And on the heels of the hall’s new corporate identity, it appears the interior is getting a major renovation. This Thursday, August 10th, will be the last day the hall is opened in 2017. AEG plans to spend a year renovating the interiors of the historic hall before reopening for business. Upon completion, Bowery Presents will take over scheduling concerts in the space.

Although the renovation raises some questions about the future of the hall’s interior, one thing is certain – our successful efforts to landmark the building preclude any worries about the future of Webster Hall in the East Village. No matter who owns the building, no matter what improvements they make to the stage, the bar, or the bathrooms, the history of Webster Hall is protected. When the LPC landmarked the building in 2008, they pledged that the grand facade and its enduring cultural legacy will be with us for decades, even centuries, to come. Thanks to Websters Hall’s status as a landmark, we can rest easy knowing that East 11th Street won’t be losing its grand piece of architecture anytime soon.

Even if a raging rock concert isn’t your thing, Webster Hall has a remarkable legacy as a gathering space in the East Village. It’s well worth preserving for generations to come, and at GVSHP we’re so thankful that preservation is exactly what’s in Webster Hall’s future.

2 responses to “What’s in Webster Hall’s Past – and Future?”