On this day in 2014, GVSHP wrote Mayor de Blasio to demand that the Trump Soho be subject to strict and clear oversight and enforcement, something missing for years under the prior administration.  A freedom of information request filed by GVSHP in early 2013 showed that for years the NYC Department of Buildings had failed to do its job in enforcing the law and the terms of a restrictive declaration under which the building was approved by the City, which required they file reports proving that illegal residential occupancy was not taking place at the building. The outcome? Trump Soho was compelled to pay $460,781.73 in fines to the public coffers, as shown in the checks below.

That same year the 454-foot-tall eyesore Trump Soho Condo-Hotel went into foreclosure and was sold.  The whole sad story inspires some reflection and review of how this monstrosity was allowed to be built.

Donald Trump first announced plans for the Trump Soho on the finale of “The Apprentice” in May 2006; you can see the video here:

This “condo-hotel” development was part of a trend sweeping the country, but it was to be the first of its kind anyone tried to build in a New York City “manufacturing zone,” where new residences or “residential hotels” were strictly prohibited by law.  GVSHP, and many others in the community, immediately opposed the plan;  not only would the enormous, unsightly glass tower be jarringly out of place, but the “condo-hotel” setup made it illegal.  These would, in effect, be residences, which violated the zoning — not a “transient hotel,” where rooms are rented on a daily basis for limited periods of time, which the zoning allowed.

Unfortunately, the city did not see it that way, and insisted that the planned development was legal and could move ahead.  (It certainly didn’t help that then-City Council Speaker Christine Quinn and then Manhattan Borough President Scott Stringer agreed  that the project was legal.)  There is a lot of background information on the decade-plus engagement of GVSHP on this issue here.

As a palliative, the city and elected officials claimed that the Trump Soho would be required to have an independent outside firm audit their records to see if the zoning was, by their incredibly generous definitions, being followed: condo owners could stay in their units for up to 120 days per year and up to 29 days for any 36 day period, but no more.  Audits would have to be submitted to the city to demonstrate compliance, with penalties for and aberrations or failure to file.

GVSHP supported a lawsuit by the Soho Alliance to get the building permits for the Trump Soho overturned before it could be built. Then-Mayor Bloomberg spent city tax dollars to defend the Trump Soho in court and he succeeded –  before a panel composed entirely of his appointees.

As we all know, the Trump SoHo was built — in spite of illegal and dangerous work being done, fatal construction accidents, human remains from a 19th century abolitionist church burial ground being discovered and disturbed on the site, and the criminal records and connections of the partners in the project being well-documented.

Whether it was the bad publicity, or poor management, or a combination of the two, the Trump Soho was never able to sell. Buyers even sued to be released from their contracts, and according to press accounts, no more than one-third of the units were ever purchased.

Nevertheless, GVSHP wanted to ensure that the meager restrictions placed upon the Trump SoHo were being enforced. We wrote and called the City, Speaker Quinn, and then-Borough President Stringer to find out what the results were of the required audits to demonstrate that the Trump SoHo was “complying” with the law, and got no response.

Only after a Freedom of Information Request was filed by GVSHP in 2013 did we uncover that not a single legally required audit had ever been filed by the Trump Soho; that neither the city nor any of the elected officials (Quinn and Stringer) involved in drawing up the agreement ever asked for one; and that no penalties had ever been levied against the Trump Soho for its failure to obey the “agreement” that had been touted as the guarantee of the development’s legality.  All that changed though, as GVSHP continued to keep this issue in the public eye.

After we uncovered and publicized that the Bloomberg Administration was not enforcing the restrictive declaration, they finally did at the very end of their administration, and found that even according to the audits Trump SoHo paid for that the terms of the agreement were not being abided by, which led to $41,840 in fines.  After we asked the de Blasio administration to continue the enforcement that the Bloomberg Administration had never really done, the Trump SoHo was subsequently found to again be out of compliance, and charged $160,900 and $258,041.73 in fines (see checks above), totalling nearly half a million dollars in fines.

Of course this is small compensation for the egregious imposition of this awful development, which the law, if properly enforced, should have prevented from ever blighting our skyline or our streetscape. GVSHP pushed  Mayor de Blasio to ensure that the required reports be submitted and inspected on a regular basis. We wish we could, realistically, ask Mayor de Blasio to undo the mistakes made by the prior administration and order the building taken down. But the Trump Soho remains an object lesson in government oversight gone wrong.

The Restrictive Covenant does allow for the city to demand more from the Trump SoHo.  According to the covenant, the city can mandate that the Trump Soho hire at their own expense an Independent Private Sector Inspector General a.k.a. “Compliance Monitor” and their duties can entail a Full Audit and Investigation, per the Agreement section below: 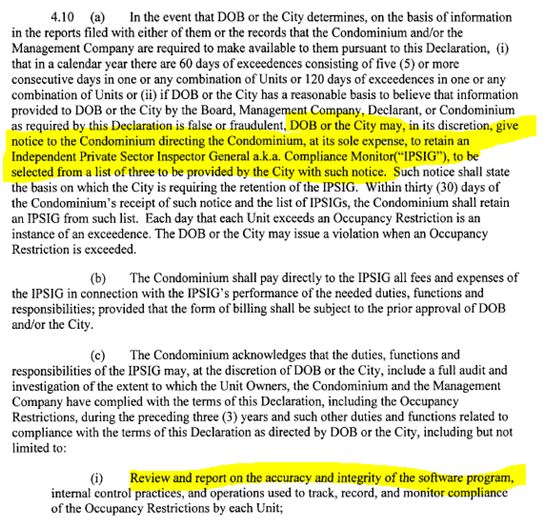 Will the administration find reason to?  GVSHP will keep a close eye on it.