On September 27, 1948, William Edward Burghardt Du Bois, more commonly known as W.E.B. Du Bois, began teaching the very first African-American history and culture class ever taught at a university, at Greenwich Village’s New School for Social Research. This history-making event appears on GVSHP’s Civil Rights and Social Justice Map (which can always be found at www.gvshp.org/civilrightsmap) and our Greenwich Village Historic District Map and Tour (which can always be found at www.gvshp.org/GVHD50tour) along with hundreds of other important moments and places in history located in our neighborhoods.

Du Bois taught at the New School for the 1948-1949 school year, teaching the first African-American history class. Previously, Du Bois had taught Greek and Latin at Wilberforce University in Ohio, sociology at the University of Pennsylvania, and economics and history at Atlanta University, among other disciplines and institutions. He was also a fellow and member of the American Association for the Advancement of Science, and a member of the National Institute of Arts and Letters.

Born on February 23, 1868 in Great Barrington, Massachusetts, W.E.B. Du Bois was a civil rights activist, Pan-Africanist, and co-founder of the National Association for the Advancement of Colored People (NAACP) in 1909, working as its director of publicity and research and editing its journal, The Crisis. Du Bois was a sociologist, educator, and historian with graduate degrees from the University of Berlin and Harvard, where he was the first African American to earn a doctorate. 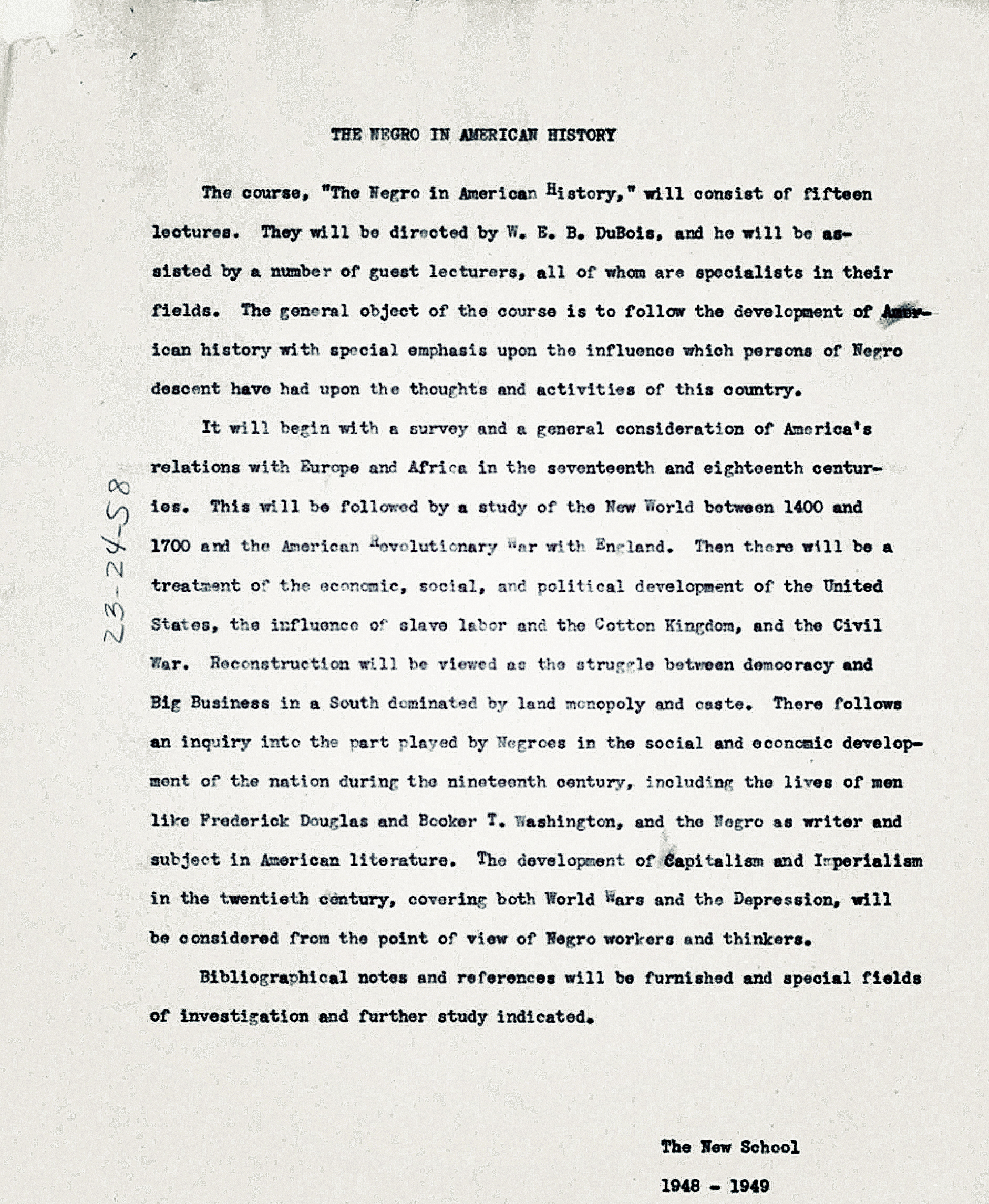 In the aftermath of World War II, Du Bois became involved in international peace movements, in working against racism as a supporter of the leftist Southern Negro Youth Congress, and as a supporter of the Progressive Party and Henry Wallace’s presidential run. These positions caused a rift with the NAACP which brought Du Bois back to New York, and back into academia, in 1948.

Du Bois’s “The Negro in American History” was a survey course which began with the study of the Negro in Europe, Africa, and Latin America in 1600, addressing slavery, the cotton kingdom, the civil war, reconstruction, Booker T. Washington, Frederick Douglass, and the contemporary experience throughout the U.S. at the time. Du Bois’s idea was to look at American history and stories through the lens of the Black experience. Since American history was told by white people who, he argued, would never include this perspective, it was important to tell this story separately, with the ultimate goal of bringing the stories together to be told as inseparably as he understood them to be.

Du Bois was a natural to teach the first African-American history class at a university, and The New School (then known as The New School for Social Research) was the natural place for such a first to take place. DuBois had attended the University of Berlin and Harvard, where he became the first African-American to earn a doctorate, and became a professor of history, sociology, and economics at Atlanta University. The New School was founded in 1919 by a group of progressive New York educators as a modern, progressive, free school where adult students could “seek an unbiased understanding of the existing order, its genesis, growth, and present working”. In 1933, the New School established the University in Exile to serve as an academic haven for scholars escaping from Nazi Germany and other oppressive regimes in Europe. Programs and departments for African-American studies did not really begin to appear until the 1960s, resulting from student and faculty activism at many universities.

The full collection of Du Bois’s papers are housed and digitized by the University of Massachusetts at Amherst’s Special Collections and University Archives, with rights held by the David Graham Du Bois Trust. They’re available online, and include the course description and syllabus for the Fall 1948 course “The Negro in American History.” The course featured several guest lecturers, which DuBois did to bring a broader array of voices, specialties, and experts from around the country into the classroom, putting his Pan-African activist theories into action.

Following his year at the New School, Du Bois traveled internationally on speaking engagements in Paris, Mexico City, and Moscow, continuing his passionate writing and lecturing for peace, and speaking truth to power. His work to ban nuclear weapons landed him in court in 1950, but his case was dismissed. During that year, Du Bois also ran for U.S. Senate as a member of New York’s Progressive Party on the platform “Peace and Civil Rights.”

If you would like to learn more about Du Bois’ history-makin history class, or more than a hundred other sites connected to civil rights and social justice, explore our map here.