We had a promising hearing last Tuesday at the Landmarks Preservation Commission on our proposed landmark designation of 827-831 Broadway, with a vote planned for this coming Tuesday, October 31st. We’re hoping for an outcome that will be more treat than trick (if you want to do more than hope, send a letter here); for good luck, we thought we’d take a look at some of the other individual landmarking efforts we’ve gotten behind over the years which have turned out well, much as we hope 827-831 Broadway will as well.

57 Sullivan Street  has a very unique landmark designation story. Built c. 1816-17, it’s one of the oldest surviving houses in Lower Manhattan and believed to be the oldest house in the South Village. It was built in the Federal style and maintains many of its significant features of this first architectural style of the newly born American republic. This row house was first calendared (or formally considered for landmark designation) in 1970, and the LPC approved designation of 57 Sullivan Street in May of 1973.  Apparently, however, this designation was overturned by the then-Board of Estimate. In 2002, this house was one of thirteen federal houses that GVSHP and the New York Landmarks Conservancy proposed for designation, and it was again considered for designation by the Commission in 2009, but the Commission never acted.  In 2014, the LPC proposed to decalendar 57 Sullivan Street along with nearly 100 other properties throughout the city which had been under consideration for landmark designation for more than five years without a final decision.  Thanks to public outcry lead by GVSHP and other preservation organizations, the LPC changed course and these properties were instead subject to backlog hearings at the LPC.  GVSHP  lead the campaign to seek final designation of the house, and on April 12, 2016, the LPC finally landmarked it. Click HERE for the designation report. 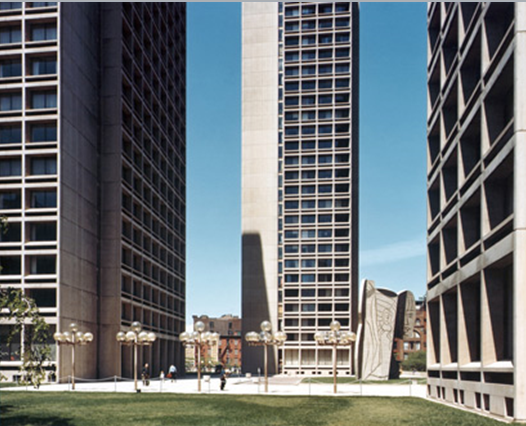 Silver Towers/505 LaGuardia Place:  On November 18, 2008, the City voted to designate the I.M. Pei-designed Silver Towers complex, including its landscaping and Picasso sculpture, “Portrait of Sylvette,” a New York City landmark. The designation culminated a five-year campaign by the Greenwich Village Society for Historic Preservation (GVSHP) for landmark designation and to preserve the complex.  GVSHP first proposed the modernist complex for landmark designation in 2003, and worked closely with residents of the complex, elected officials, and preservation organizations on advancing the landmarking proposal. NYU owns the land under the complex and two of the three towers (the third is a moderate-income housing complex for neighborhood residents NYU was required to build), and initially strongly opposed landmark designation. When the LPC decided to hold a hearing on the proposed designation, the university changed its position, saying it supported landmark designation but wished to build a 40-story tower on the soon-to-be-landmarked open space north of the Picasso sculpture, which would have blocked the public view of the art work. GVSHP and other supporters of landmark designation adamantly opposed the NYU 40-story tower plan, saying it violated the entire notion of landmarking the complex, and urged the LPC to protect the open space as part of its designation. The LPC’s designation report did in fact acknowledge the importance of the open space as integral to the design, and allowed us to prevent NYU from adding a fourth 400 foot tall tower on the site along Bleecker Street. 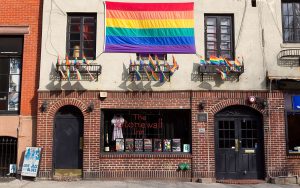 Stonewall Inn, 51-53 Christopher Street:  The Stonewall Inn was the site of the Stonewall Riots, and is considered the most important LGBT historic sites in New York City and the nation. GVSHP first proposed designation of the Stonewall to the LPC in 2014, and spearheaded the campaign to get the City to take this action. On June 23, 2015, the LPC voted unanimously to designate the Stonewall Inn, making it the first such site the Commission has landmarked based solely upon LGBT history. In 1999, GVSHP was co-applicant for getting Stonewall listed on the State and National Registers of Historic Places, the first site so designated based upon LGBT history.  Click HERE for to read the New York City landmark designation report. 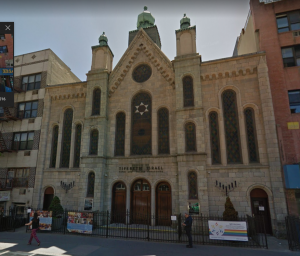 Tifereth Israel/Town & Village Synagogue:  This striking structure was built in 1866 as the First German Baptist Church; in 1926 it became the Ukrainian Autocephalic Church of St. Volodymyr; and in 1962 it became the Town & Village Synagogue, reflecting the successive waves of immigration and ethnic change which have swept over the East Village. Shortly after New York’s landmarks law was adopted in 1965, the building was formally heard and considered for landmark designation, but never received a vote. However, it did remain officially “calendared” by the LPC, or formally under consideration for landmark designation, making it perhaps the longest time any building in New York has remained in “landmarks limbo.” In 2013 the building was advertised for sale, prompting the Greenwich Village Society for Historic Preservation (GVSHP) and other preservation and East Village groups to wage a campaign to get the Landmarks Preservation Commission to vote on landmarking the building. In response, a new public hearing on landmarking the building was held on March 25, 2014, at which GVSHP and many supporters urged the Commission to vote in favor of designation (read GVSHP’s testimony here). GVSHP conducted extensive research upon the building’s unique architecture and history, and argued for its significance and the merit of its preservation, as well as generating hundreds of letters to the Landmarks Preservation Commission (LPC) urging designation. When new LPC Chair Meenakshi Srinivasan was appointed, GVSHP immediately reached out to her and urged the new Chair to finally move ahead with a vote on designating the building, which her predecessors would not do.  The building was landmarked on October 28, 2014.  Click HERE for the designation report. 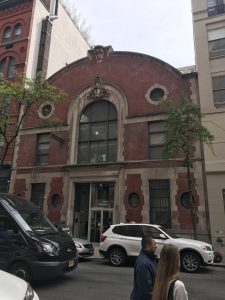 Former Van Tassell & Kearney Auction Mart/Frank Stella Studio, 128 East 13th Street:  After a six-year campaign led by the Greenwich Village Society for Historic Preservation (GVSHP), the NYC Landmarks Preservation Commission landmarked this building on May 15, 2012 (more info on building HERE).  In 2006 GVSHP discovered plans by a new owner to tear down the building and replace it with a 7-story condo (more info HERE).  GVSHP immediately brought the plan to the attention of the LPC and requested an emergency hearing to save the building.  While it was well known that the building had served as the studio of highly-influential 20th century artist Frank Stella from 1978 to 2005, GVSHP provided the LPC with research showing it was originally built as the Van Tassel and Kearney Horse Auction mart, a place where the Vanderbilts and Delanos went to view horses paraded on a central ring in the middle of the grand central hall of this building to select them for purchase.  While horse auction marts were once common buildings in New York City, GVSHP’s research also indicated that this was the last such structure which survived intact.  GVSHP research also showed that the building was used during World War II as an assembly-line training center for women, thus leading to our use of the iconic “Rosie the Riveter” image for its “We Can SAVE It – Landmark 128 East 13th Street” campaign (see more HERE).  The LPC held an emergency hearing in 2006 and prevented demolition of the building (read testimony HERE), but refrained from voting on designation for six years.  GVSHP and other advocates, including City Councilmember Rosie Mendez (read HERE), continued to push for designation (read letter HERE).  Click HERE for the designation report. 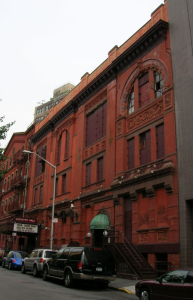 Webster Hall, 125 East 11th Street:  In the summer of 2007, GVSHP submitted to the Landmarks Preservation Commission LPC substantial research on the history and significance of Webster Hall, and urged the Commission to landmark the site. Built in 1886-87, the sturcture had an annex added in 1892,  In addition to its architectural interest, Webster Hall embodies much about the social, political, and cultural history of downtown and the East Village. Originally a “hall for hire,” from the late 19th century through World War II Webster Hall was the scene of labor rallies, drag balls, costume bacchanals, and political protests. After World War II, it became an important performance venue for emerging Latin artists and folk musicians, and then a recording studio used by Elvis Presley, Frank Sinatra, and Julie Andrews, and for the recording of soundtracks for Hello Dolly and Fiddler on the Roof. Additionally, the zoning for the site at the time would have easily allowed Webster Hall to be replaced by a 20+ story dorm or hotel, as happened on many neighboring sites.  The building was designated a landmark on March 18, 2008.  Click HERE for the designation report.

Westbeth:  The New York City Landmarks Preservation Commission voted unanimously to landmark Westbeth on October 25, 2011, following through on a promise made seven years earlier to GVSHP and other community groups working to extend landmark protections in the Far West Village. Westbeth is a singularly important historic site.  Between 1965 and 1970, the abandoned Bell Telephone Labs between Bethune and Bank Streets on the Greenwich Village waterfront were converted by then-unknown architect Richard Meier into Westbeth, the country’s first subsidized housing complex for artists, and the first large-scale adaptive re-use of an industrial building for residential purposes.  As the Bell Telephone Labs, the complex was the site of the invention of the transistor, chain broadcasting, the vacuum tube, and the transatlantic telephone, and parts of the first “talkie,” the Jazz Singer, were produced there.  Since its transformation to artists’ housing, Diane Arbus, Merce Cunningham, Moses Gunn, Hans Haacke, and Gil Evans, among countless other artists, lived or worked at Westbeth.  One of the first residential developments along the Greenwich Village waterfront, Westbeth began the transformation of this formerly industrial area into a vibrant residential community.  Westbeth remains an affordable housing complex for more than 350 working artists, providing live/work spaces, studios, and galleries. GVSHP, with support from the J.M. Kaplan Fund, researched and documented the complex’s 150-year history to nominate Westbeth to the State and National Register of Historic Places, and to assist and spur the LPC to move ahead with landmark designation.  In 2009, GVSHP’s nomination of Westbeth was accepted and the complex was listed on the State and National Register of Historic Places, providing opportunities for grants and loans to help with restoration and maintenance of the complex.  Click HERE for the New York City landmark designation report.

These are just some of the buildings for which GVSHP has secured landmark designation; to see more, click here or here.  Stay tuned for news about 827-831 Broadway next Tuesday.