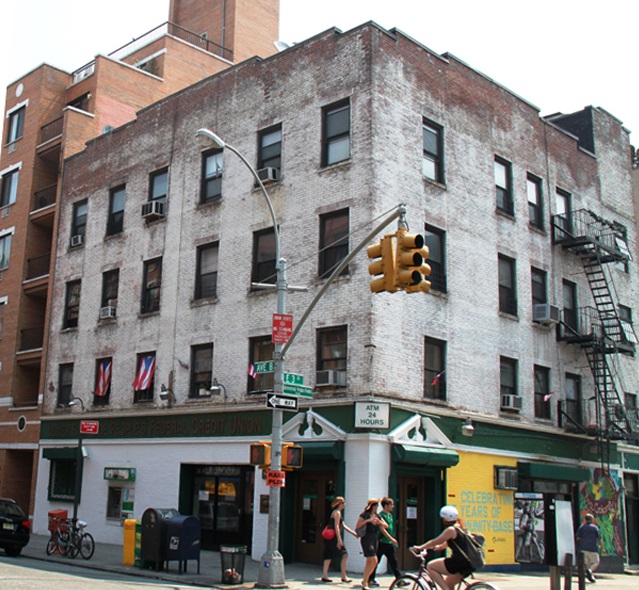 The presence of banks in neighborhood retail spaces often elicit mixed feelings at best. Typically these tend to deaden the streetscape and are owned and operated by some faceless, distant multinational corporation.

But banks also perform an incredibly necessary and important function for local residents.  According to americanbanker.com, only 18% of seniors use mobile banking compared to 67% of millennials, and the Pew Research Center found that only 64% of Americans 65 or older used the internet, with only 42% of Americans 65 or older owning a smartphone. That means there are tens of millions of people in this country who need to physically go into a bank to deposit a check, withdraw money, purchase a CD, apply for a loan, or conduct any of the other routine financial business that most people in younger generations conduct online.

Luckily for the seniors and mobility-impaired customers, there is a great resource in the East Village that you don’t have to feel ambivalent about. Located on the corner of  Avenue B and East 3rd Street you’ll find the Lower East Side People’s Federal Credit Union (LESPFCU), opened in 1986 in a former Manufacturers Hanover Bank at 37-39 Avenue B. The buildings consist of what was likely two pre-law tenements dating from c. 1850. In 1922, the building on the rear of the lot (East 3rd Street side) was demolished, and a one-story extension to the existing building was constructed.

By 1938, the building was owned by Manufacturers Trust Co., which had a store on the first floor with “display lofts” on the upper floors. Later that year, the Building was converted back to tenement housing, with two families on each upper floor and a bank on the ground floor, as it remains today.

According to the National Federation of Community Development Credit Unions:

LESPFCU has been the epitome of a community institution since its founding in 1986. The credit union’s expansive field of membership has grown from its original branch in the Lower East Side neighborhood of Manhattan to include Central and East Harlem and low-income individuals and families in all five boroughs of New York City.

Owned by its members, the LESPFCU is a non-profit financial cooperative that promotes economic justice and opportunity. It was organized by neighborhood activists to fill the void left by the closing of the last commercial bank branch on the Lower East Side, and currently has over 8,000 members. It was recently in the news when it sued President Trump and Michael Mulvaney over their management of the Consumer Financial Protection Bureau (CFPB), which they claimed to be “a naked, illegal power grab by Donald Trump to destroy an agency that helps and protects millions of ordinary Americans.”

Their suit was rejected based on a lack of standing. But this changes nothing about the local banking services they offer including checkings, savings, money markets, CDs,  HDFC loans, home loans, business loans, and zero interest DREAMer loans to immigrant youth in New York City who are applying for Deferred Action for Childhood Arrivals (DACA).