1950 was a seminal year in the life of the “last rock star poet,” Dylan Thomas. On February 20th of that year the much-celebrated Welsh poet arrived in New York to begin what would be the most exhilarating yet grueling period of his career. The period between 1950 and 1953 was dominated by four trips to America. The Swansea writer traveled to New York  after being invited by fellow poet John Malcolm Brinnin, who subsequently acted as his promoter.  He worked extremely hard through an exhausting schedule across the United States of poetry readings and lectures that were punctuated by countless lunches, dinners, parties, and receptions, where he was expected to behave as “the great poet” and to entertain the masses.  Much of that time was, of course, spent in Greenwich Village.

A prodigy who became a living legend, Thomas was the first poet to be magnified by celebrity culture – his words, voice, image and private life were broadcast on an international scale through the 20th Century’s new media of radio, television, film and audio recordings.  “Dylan Thomas’s voice has added a new dimension to literary history,” the New York Times raved when he launched his U.S. reading tour. “He will surely be remembered as the first in modern literature to be both a maker and speaker of poetry… the typical reader will become entranced after hearing him recite.” As a result of the wide success of his tours, Thomas became an international celebrity.  “He was the first,” says Philip Levine, a former U.S. Poet Laureate honored with the Pulitzer, the National Book Award, and multiple National Book Critics Circle awards. “The idea of a tour was original. And he had the poetry to back it up. He had a profound influence. It was beneficial because it made us better readers. And giving readings became a huge source of income.” 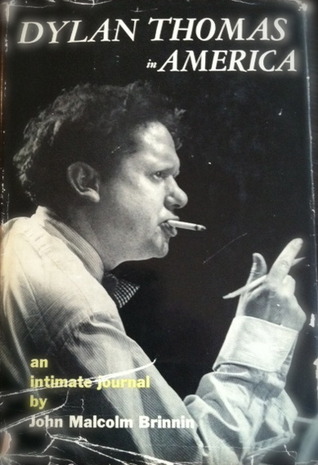 Dylan Thomas’ 1950s U.S. tours set the template that poets follow to this day.  He paved the way for the Beats, the West Coast poets, the St. Mark’s Poetry Project, poetry slams, and all the touring poets. He crossed over to influence rock stars like Bob Dylan (who changed his name from Zimmerman) and The Beatles, who included his image on the album cover of Sgt Pepper’s Lonely Hearts Club Band.  And, according to Paul McCartney, John Lennon was inspired to start writing because of his love of Thomas’ work.

In his broadcast ‘A Visit to America’ he remarked, “I went all over the States, ranting poems to enthusiastic audiences that, who the week before had been equally enthusiastic about lectures on Railway Development or the Modern Turkish Essay.”  But his modesty was unfounded.  His electrifying performances had a huge impact on the American audiences. His performances during these tours contrasted between tender and lyrical to powerful and oratorical. He read the work of many poets including Yeats, Hardy, Auden, Lawrence, MacNeice, Alun Lewis, and Edith Sitwell, and he usually concluded the performance with a selection from his own works. It is said that his friend and fellow poet, e e cummings, was so moved by Dylan’s performances that he walked the streets in contemplation for hours afterwards.  cummings had a house at 4 Patchin Place where Thomas often stayed.

The Village was, as many know, the chosen stomping grounds of Thomas.  He performed a reading at the Cherry Lane Theater on his second visit to the city in 1952, but the show was almost cancelled when he said he lost his notes.  Fortunately a friend came forward with a replacement at the last minute and he performed.

The Minetta Tavern was one of his favorite watering holes.  It attracted many poets and writers including Ernest Hemingway, Ezra Pound and ee cummings.
The White Horse became infamous as the very last place Thomas hoisted a few.  Seventeen to be exact.  He ultimately met his demise at the very young age of 39 at St. Vincent’s hospital after that fateful drinking binge.