Scratch the sidewalk anywhere in the Village or East Village and you’ll always find interesting layers of history.  Last month, we went out on a limb and talked about 2nd Avenue and 2nd Street in honor of February 2nd (2/2), but today, March 2nd (3/2) we’re expanding our focus.  Both 3rd and 2nd Avenues run through the East Village from 14th St. to 7th St. (where 3rd Avenue turns to Cooper Square), and along these stretches are countless histories and anecdotes that capture what makes the neighborhood so unique.   In honor of the day, here’s just a brief sampling of some of the embarrassment of riches that can be found between these two numbered streets.

There is an unexpectedly grand treat on the south side of this busy thoroughfare between 3rd and 2nd Avenues.  The entire row of New Law tenements at 226-240 East 14th Street were built in 1902 to the designs of the architectural firm of Sass & Smallheiser.  These red brick buildings with terra cotta details employ a rich Renaissance Revival style.  The outer-bay, second floor bowed windows are surrounded by detailed ionic columns and topped with a fluted frieze. The four recessed bays on the second floor have arched enframements with exaggerated keystones.  The second floor also has recessed belt courses of white brick, a popular feature of Renaissance Revival tenement design.  The windows on the third through fifth floors have either splayed lintels or full enframements all in classically inspired motifs, and the fourth floor has windows topped with curved pediments.  The sixth floor, like the second, has recessed belt courses in white brick.  The pressed-metal cornice follows the curve of the projecting bays and acts as a lintel for the sixth floor windows.  Though the cornice has been removed from 236, and 238-240 was painted, these buildings are still in remarkable condition. 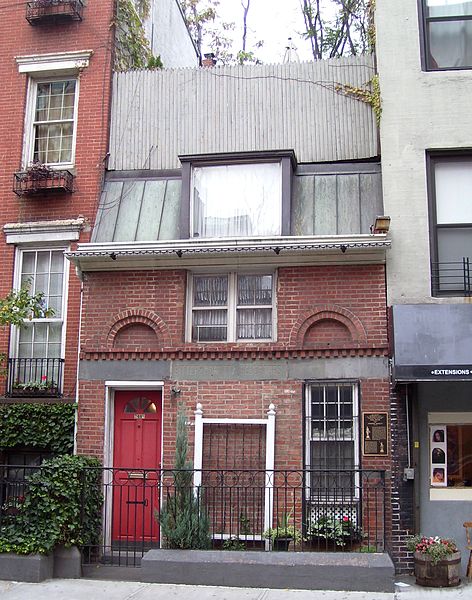 Built in the rear yard of 215 Second Avenue, 249 ½ East 13th Street was built in 1891 and designed by Max Schroff.  The little building was built for sculptors Karl Bitter and Giuseppe, or Joseph, Moretti, both of whom lived in the apartment building at 215 Second Avenue.  While Moretti is listed as the original owner of the studio, it was built on the property belonging to  Eimer & Amends, and it was with their permission that the building be constructed.  Bitter & Moretti only used the space for one year, then moved on as independent sculptors.

Karl Bitter was an Austrian born sculptor who immigrated to the United States in 1889.  He quickly found success in New York City after winning the commission to sculpt the bronze doors for Trinity Church.  From this work he was introduced to architect Richard Morris Hunt.  It was on a project for Hunt, the Marble House, that Bitter met Giuseppe Moretti.  Moretti, a native of Sienna, Italy, began studying as a marble sculpture around the age of nine.  When he immigrated to America, he had already worked as a sculpture throughout Italy, Croatia, Austria and Hungary.

The small, two-story brick building with its mansard roof, large dormer windows and skylights made for a bright studio space in which to work.  The brick dentil molding above the stone frieze lends a classic Greek-style to the building, while the brick blind arches provide interest and symmetry.  After Bitter & Moretti left the studio, another sculpture moved in in 1899.  The window on the second floor was inserted at this time. 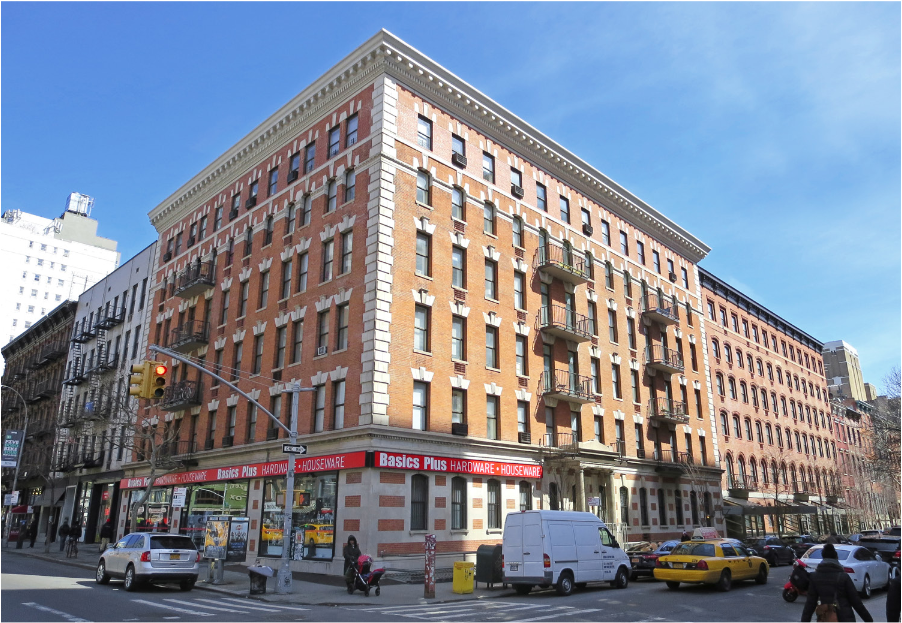 Sitting on three lots on the northeast corner of Third Avenue and East 12th Street, this 5-story brick and terra cotta building combined two Pre-Law tenements located at 91 and 89 Third Avenue with a new building at 87 Third Avenue in 1902 to create a factory.  This new, large space was adjacent and possibly even adjoined to their existing factory at 201-213 East 12th Street.  Within the newly expanded space, they were able to print and bind their directories for an ever-growing city.  The Third Avenue building also included office space.  Trow Directory Printing and Book Binding likely occupied these two buildings until the mid-1950s when the Third Avenue portion was converted into apartments and shops, and the East 12th Street building was leased out to another industrial manufacturer.  While the building housed the Trow Directory Printing and Book Binding Company, the original two tenements and the land was owned by the trustees of the Hamilton Fish Estate and were leased to the company.

The current owners beautifully restored the cornices of this building, an act that was surprising for a non-landmarked building.  While such restorations are common in historic districts, here the project was geared only towards improving the aesthetics as well as the long-term value and durability of the building.  As a result, GVSHP presented the owners and architects with a Village Award in 2015 for their efforts. 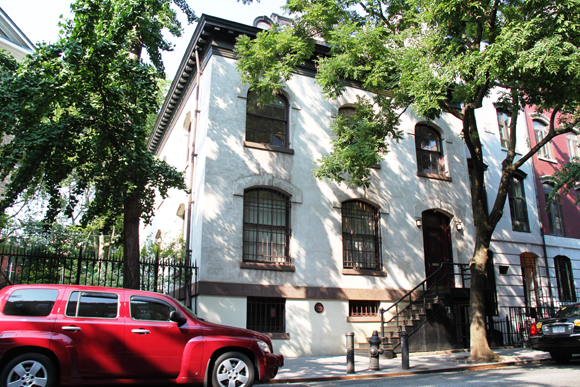 The Ernest Flagg Rectory of St. Mark’s Church-in-the-Bowery, as it is known today, was designed in a simple Beaux-Arts style by renowned architect Ernest Flagg in 1900 for the Episcopal congregation at the church. The three-story house has metal mansard roof set with ovular windows and a porch to the rear which faces the church.

Arguably one of the most historically significant landmarks in the East Village and even the entire city, St. Mark’s Church is one of the major focal points of the neighborhood.  The church was built over an extended 55-year period, with the main building constructed of fieldstone in the Georgian style, the Greek Revival steeple completed in 1828, and the Italianate portico added in 1854.

As the oldest continually used place of worship in New York City (and the second-oldest religious building in Manhattan), this church stands on the site of New Amsterdam Director General Pietr Stuyvesant’s Bouwerie Chapel, and the Director General is buried along with numerous other notable family members in the Stuyvesant family vault in the churchyard. The church and grounds were designated a New York City Landmark in 1966 and placed on the National Register of Historic Places in 1975. 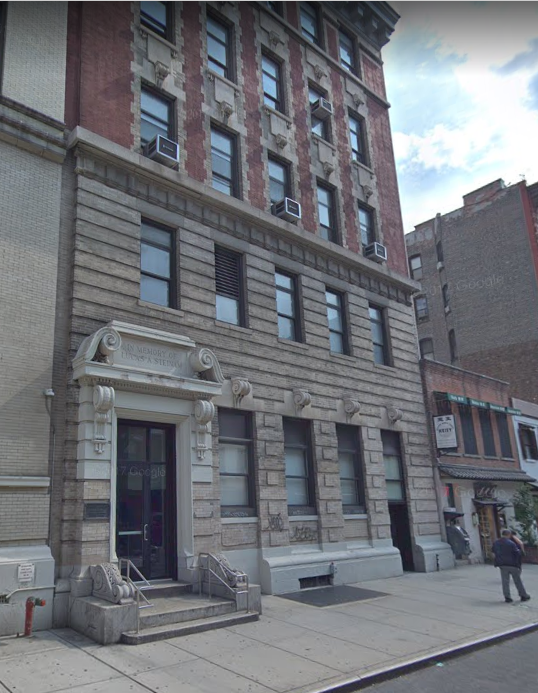 This six story building was constructed in 1891 for the Hebrew Technical Institute and was designed by architects Pickering & Carter. The brick and stone building features classical details such as scrolled pediment above the door and keystones, decorative stone panels between windows, and a bracketed cornice above the fifth story, suggesting its original height of only 5 stories. A sixth story was later added.

Situated at the prow, or point, of the triangular piece of land formed by Stuyvesant and East 10th Streets, this beautifully preserved four-and-a-half-story Anglo-Italianate townhouse was built in conjunction with the surrounding houses as part of the disposal of the Stuyvesant family estate surrounding St. Mark’s Church-in-the-Bowery.  The most prominent feature of this house is the wall that faces the prow of the block, distinctive from the rest of the houses in that it is faced in stone, rather than brick, with decorative quoinwork and a large, ornamented bay window in the center of the ground and parlor floors. Like its neighbors, the house also displays a rusticated light-colored stone ground floor with vermiculated keystones and cornerstones and corbeled entablatures over the entry doors. The parlor floor is higher than the others in the Italianate tradition of the piano nobile or “grand floor”, and the upper floors of the facade are red brick with light stone window surrounds. This is the only house of the group to have retained the original ironwork handrails and balconies. The original owner of this lot was Mathias Banta, the developer.

Elizabeth Stuyvesant Fish willed that her estate, which included the land upon which this group of town houses is built, be divided equally amongst her four children, and the property was subsequently sold to Mathias Banta in 1858 for development on the condition that no “dangerous, noxious or offensive establishments whatsoever, nor any houses generally known as tenement house” be erected there. Banta subdivided the property into the present lots and listed the properties for sale in the newspapers. The lots were sold within a few months, and construction on the triangular piece of land encompassing Numbers 23 through 35 Stuyvesant Street and 112 through 128 East 10th Street began in 1859. This house is part of the St. Mark’s Historic District, designated 1969.

Built in 1888 and designed by architect William C. Frohne, this impressive, landmarked five story building housed the German American Shooting Society until 1904. The Society was one of many organizations set up at the time by European immigrants which catered to clubs based on nationality. This building served as headquarters for the rifle-toting society (this was a social club, not a shooting range) and also housed 24 offices that rented space to mostly German and Slavic businesses.

Following the first wave of German immigrants to settle on the lower East Side in the 1840s, another group of over one million Germans arrived in the 1860s that were fleeing war-torn and remained Europe. Many of them settled on the Lower East Side, creating one of the first predominantly foreign-born neighborhoods in America. For a portion of the 19th century, the East Village hosted the largest population of Germans outside of Europe. This Society was part of a larger collection that was known as “Kleindeutschland,” or Little Germany.

The building itself was the color of old ivory and housed an artistically designed ballroom and saloon on the first floor with swellings on the rest of the floors. It was built of brick with a mansard roof. Only seven years before this building was constructed, there is evidence that architect William Jose was to have built upon this lot in 1881. It is unclear if Jose’s building was demolished or if plans were cancelled.

The same year as the tragedy of General Slocum on which members of the most established German families perished, the German American Shooting Society closed its doors. There is no evidence of what the building was used for during the next 15 years, but by 1919 there was a store on the first floor with meeting rooms and offices above. The next record of the building is in 1968, when a new apartment was built on the top floor for a caretaker. 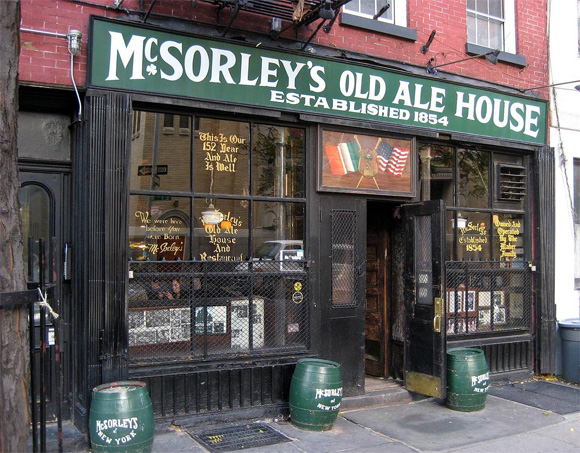 When McSorley’s Old Ale House opened its doors for business in 1854, Franklin Pierce was president, the Civil War was still a decade away, and lunch was free to patrons.

The only significant change to the motley customers happened in 1970 when McSorley’s was forced by the courts to admit women. After that, the motto was amended from “Good Ale, Raw Onions, and No Ladies” to “good Ale and Raw Onions.” McSorley’s, in every other way, has not changed. When pictures were put on the wall sin the 1800s, they stayed there, even as other items were added in the intervening years. The souvenirs helped draw tourists and visitors to McSorley’s even more than the ale and onions with saltine crackers. On permanent display, today you can find everything from theater and sports memorabilia to the chair of Peter Cooper, the founder of Cooper Union, a mug that Cooper engraved with an ice pick, and flags, cartoons, clipping, and photographs.

McSorley’s has had a very diverse crowd, and it has attracted numerous celebrities, artists, political figures, and more. Four presidents, including Lincoln and Clinton, have stopped in for a drink at the bar; Brendan Behan had a favorite seat by the fire; John Sloan painted pictures of the bar at least four times (one of which is in the Whitney Museum’s permanent collection); e.e. cummings has a poem about McSorley’s; and New Yorker columnist Joseph Mitchell wrote a famous article about the ale house in 1940 called “The Old House at Home.” Countless other notables have stopped in over the years, and some continue to do so today.