On March 26, 1647, Anthony (also referred to as Antony) Congo, a newly manumitted slave of the Dutch West India Company, was granted six acres of land by the Council of New Amsterdam just east of the Bowery. His was one of more than thirty land grants to freed slaves by the Dutch New Amsterdam government which, according to historian Christopher Moore, was the first legally emancipated community of people of African descent in North America.  These grants were located throughout Lower Manhattan, comprising much of present-day Greenwich Village, the South Village, the Lower East Side and East Village.  And this historic settlement, sometimes referred to as “The Land of the Blacks,” is a critical but oft-forgotten chapter in New York’s history, as well as a key featured element on GVSHP’s Civil Rights and Social Justice Map. 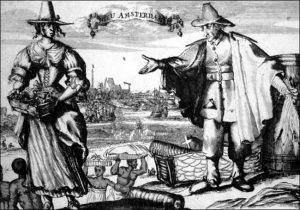 The free blacks who were the individual landholders in this area, north of walled and protected New Amsterdam community, were almost exclusively former “company slaves” of the Dutch West India Company.  Both men and women, they had been manumitted as early as within twenty years of the founding of New Amsterdam and their being brought to the colony as slaves. In some cases, these free black settlers were among the very first Africans brought to New Amsterdam as slaves in 1626, two years after the colony’s founding. Several petitioned successfully for their freedom. They were granted parcels of land by the Council of New Amsterdam, under the condition that a portion of their farming proceeds goes to the Company.

Director General William Kieft granted land to manumitted slaves under the guise of a reward for years of loyal servitude. However, these particular parcels of land were granted by the Council for more calculated reasons. As the colony of New Amsterdam faced the threat of Native American raids and attacks, the Council granted manumitted slaves landholdings in strategic areas so as to create a defensive buffer-zone between the Native Americans residing in northern Manhattan and the European colonists residing at the southern tip of the island. Within this buffer-zone, those of African descent were made the ‘middlemen’ between Native American territories and the Dutch colonial settlement.

Little is know about Anthony Congo. His land grant sat directly east of the Bowery, starting at a point between present-day Houston and Stanton Streets and stretching southward to Rivington Street. The Africans who were brought to New Amsterdam during the 17th century were from Western and Central Africa, with their surnames suggesting the parts of Africa from which they came, such as Angola and Congo.

Unfortunately, Congo was not able to hold on to this land for long.  According to I.N. Stokes’ The Iconography of Manhattan Island, 1498-1909, vol. 6, Petrus Stuyvesant, the Director General of New Amsterdam following William Kieft, granted Anthony’s land to Claes Teunissen in 1662, reasons unknown.

The rest of this history-making settlement suffered a similar fate.  When the English captured the colony of New Amsterdam and renamed it New York in 1664, the newly established English government demoted free blacks to legal aliens. By 1712, colonial New York law fully prohibited black land ownership through both purchase and inheritance, denying free blacks all landowning rights and privileges. By 1716, all farmland previously owned by peoples of African descent had been sold off and seized by wealthy white landowners, who turned these former free black settlements into retreats, farms, and plantations.

Notably located within the former bounds of Antony Congo’s land are the New Museum of Contemporary Art, as well as Freeman’s Alley.  The alley is one of Lower Manhattan’s few surviving public alleyways, whose name no one seems to know the origin of, but bears eerie echoes of Anthony Congo’s presence here.

For more information on this 17th century African community in our area, see the GVSHP Civil Rights and Social Justice map.