NYC has designated the week of April 17 as Immigrant Heritage Week, because on April 17, 1907, more immigrants entered the U.S. through Ellis Island than any other day in history. April 19th happens to be the birthday of one of our neighborhood’s many incredible immigrants, noted East Village photographer Marlis Momber.  In 2015, GVSHP conducted an oral history with Marlis Momber, which you can check out here. 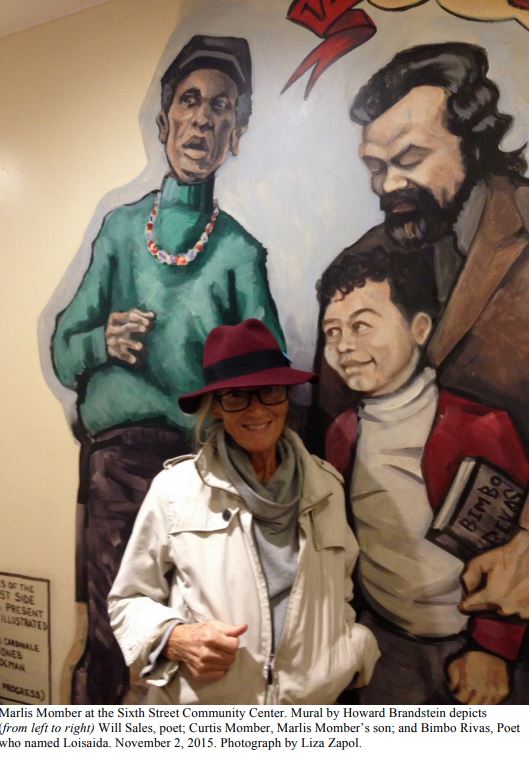 Marlis was born in Berlin in 1943, and in her oral history she links her memories and images of war-ravaged Germany after World War II with vivid descriptions of the burnt out and abandoned East Village and Lower East Side of the 1970s. However, she noted, “there was also vitality and community on those blocks.”  She felt that residents found “inspiration amid the emptiness.” Many of these residents were squatters, mostly artists, who had been maintaining some buildings for over a decade.

In the interview Momber recounts her transition from a career in fashion photography to a renowned career in documentary photography.  She also discusses her experiences returning to New York from Panama City:

“I came out of LaGuardia at the time, came over the Williamsburg Bridge, down Delancey Street. There was this mural, this most beautiful mural. Right up there on the wall. I asked the cab driver, “Could you please drive by there?” He says, “I ain’t going there.” I said, “What do you mean you ain’t going there? This is New York City. This is like, you know, five minutes away from where you’re supposed to take me on Fifth Avenue and 25th Street.” “I ain’t going there.” So I came to the studio. I asked my assistant to give me a loaded camera. He said, “Yeah, but it’s got film from Panama.” I said, “It’s OK. Give me an extra roll,” blah, blah. I got on my bike and went back and took my first photo. That was it. That was the end and the beginning of Marlis Momber, fashion photographer becoming a documentary photographer.” 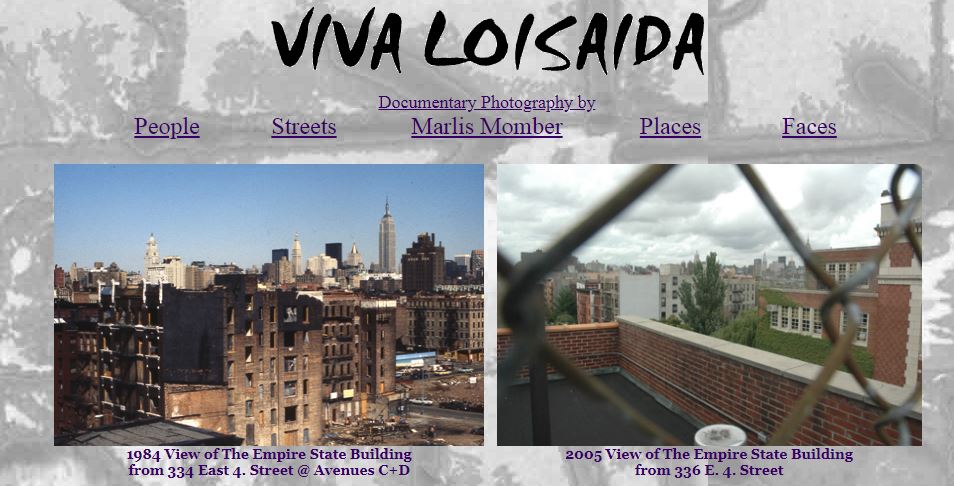 Momber started photographing murals by Maria Dominguez and the CITYarts Workshop, beginning her involvement in the East Village community. She mentions meeting her collaborator, Tyrone Jackson, with whom she later had a child. She also describes the whitewashing of the East Village, literal painting over murals (including murals by Maria Dominguez) and evidence in the community of gentrification.

In the second portion of the interview she discusses urban homesteading, and her activism as a documentarian in the East Village, photographing sensitive spaces including the police precinct, synagogue, and rallies and protests:

“The most memorable protest was the one on 10th Street and Third Avenue where they already had taken down a whole block of perfectly acceptable three to four, five-story high storefronts with apartments on top. They already, they just bulldozed it and without proper anything. Every housing agency—Cooper Square, GOLES [Good Old Lower East Side] Even JPC, HPD [Housing Preservation and Development], Joint Planning Council was in its infancy, because they did Pueblo Nuevo later. But the churches, especially Father Kennington of the Holy Redeemer was very active anyway, and the people from the Joint Planning Council, who were for the people—and at the time, there were plenty of them. They were in the majority. They chained themselves to the construction equipment, OK? We had balloons. We had congas, making noise, making a racket, and they came at us with motorbikes and horses.”

Momber also recalls playing with her siblings in piles of rubble and throwing aluminum cans into the paths of tanks to watch them flatten. She recounts the return of her father from war, a strong socialist leaning in her family, and attention to matters of social justice.  You can visit her own webpage here.

Click here to listen to or read the entire oral history.

Read more about some of the people and immigrants who made our neighborhoods great.