There are a number of legendary rock venues in our neighborhood, many an integral part of the 1980s NYC club scene. One of the leading ones was ‘The Ritz,’ located in Webster Hall, designated a New York City landmark in 2008, on East 11th Street between Third and Fourth Avenues.  The Ritz opened on May 1, 1980, and it was one of the first clubs to use video in conjunction with music, utilizing a 30 x 30 foot screen (something other clubs around the country would copy). Over the course of its near decade-long tenancy on East 11th Street, the Ritz hosted legends such as U2, Iggy Pop, Tina Turner, Guns N’ Roses, Depeche Mode, Prince, The  Talking Heads, and Sting, just to name a few.

Webster Hall was built in 1886-87 (the eastern annex in 1892), and over its long history has served Greenwich Village and the East Village as a venue for social meetings, labor rallies, receptions, and balls. In 1980, Jerry Brandt, a legend himself in the music business, chose the site for his new club, the Ritz. In a recent interview, he described the club’s place in the New York City music scene: “The 80s were defined by rock n’ roll, attitude, the clothing and the drugs. The Ritz propelled the 80s with the greatest rock n’ roll bands in the world. The Ritz was the premier venue in New York City.” An article in The Villager from 1981 had this to say about the club:

The biggest, most ostensibly legitimate club is the Ritz at 11th Street and 4th Avenue. It’s no lie calling the Ritz an old Puerto Rican dance hall – it comes complete with mirrored walls, Spanish/English bathroom signs, marble stairs and a monstrous sparkly whatchamacallit hanging ominously from the ten-mile-high ceiling. Yikes! All I can think about is the sword of Damocles. At the Ritz, the bigger-is-better theory applies. A giant video screen plays dream-state film splices between acts. Hypnotic Souixsee and the Banshees at 16 times real-life size. A night at the Ritz can be expensive and/or overcrowded, depending on the act, the night of the week and the weather. If the Rolling Stones are REALLY going to play in one of New York’s downtown clubs, it’ll be the Ritz.

MTV made its debut at the Ritz and would go onto present Live at the Ritz on a seasonal basis. This series featured performers including Run DMC, The Smithereens, the Cult, Iggy Pop, Great White, and the infamous Guns N’ Roses show from February 1988 which Rolling Stone said: “captured the band at its most primal.” During the playing of ‘Paradise City,’ Axl Rose dove into the sea of fans and it took three stagehands to extract the lead vocalist who emerged shirtless (really? he actually had been wearing a shirt?), without jewelry and scratched up. Slash meanwhile played an intensely feverish solo sprawled on his back. 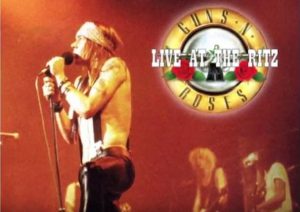 In 1989 the Ritz moved to 254 West 54th Street, former home of Studio 54, leaving the East Village. Webster Hall was reopened as a club in 1992 and reassumed the historic name, ‘Webster Hall.’ Recently, under new ownership, it has been subject to extensive interior renovations as well as some limited changes to the exterior (click HERE for information on those).

29 responses to “Remembering the Ritz”